Doing Business in the Heart of Dixie 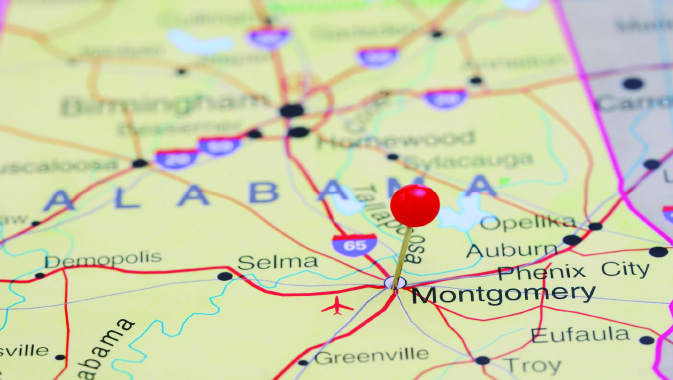 The Southeast enjoys the fastest growing economy in the United States. As the Heart of Dixie, Alabama is centrally located to capitalize on this exciting success. A strong, pro-business climate, competitive labor costs, a dedicated workforce, and an abundance of available land make the state an attractive destination for a wide variety of industries.
~
Business in Focus sat down with Greg Canfield, Secretary of the Alabama Department of Commerce, to learn more about the advantages of doing business in the state.

BIF: Overall, what makes the State of Alabama a good place to do business?
GC: Alabama offers many significant advantages for businesses. These include a low-cost environment, business-friendly policies, proven job-training programs, seven research universities, and a solid track record of helping companies achieve long-term success.

Alabama has the infrastructure connections that companies need to operate efficiently. Alabama’s assets include a busy deep-water port in Mobile, an extensive interstate system, five Class I railroads, intermodal facilities, and major airports. We also have prime centers of innovation including Huntsville’s Cummings Research Park, a leading science and technology business park, and Birmingham’s Innovation Depot, which is considered a top business incubator.

BIF: What factors have successfully positioned Alabama for success?
GC: At the direction of Governor Robert Bentley, we adopted Accelerate Alabama in 2012 as the state’s first strategic economic development growth plan. Since then, the Alabama economic development team has announced 55,736 new or future jobs and $13.2 billion in capital investment, with most of the activity coming in key sectors targeted by the Accelerate Alabama plan.

We’re now working to update that plan, creating Accelerate Alabama 2.0. We want to build on the momentum by strengthening the alignment of the state’s workforce development initiatives with those of targeted industries. In fact, many of those primary initiatives were consolidated within a new Workforce Development Office in the Department of Commerce. We’re always looking for ways to improve what we do.

BIF: Is Alabama attracting foreign investments?
GC: Mercedes-Benz’s decision in 1993 to locate its first U.S. plant in Alabama put the state on an international stage. Since then, global automakers Honda, Hyundai and Toyota have come to Alabama and expanded repeatedly, which has pulled in scores of parts suppliers from Asia and Europe. Between 2012 and 2014 alone, auto-related investment in Alabama exceeded $3.6 billion, most of it in the form of foreign direct investment.

We believe Alabama’s next growth area for foreign investment will be aerospace. Airbus is beginning to assemble the first Alabama-made passenger jets at its new, $600 million manufacturing facility in Mobile. Already, we have begun to see a steady flow of European aerospace companies set up operations in Alabama, attracted by the opportunities created by Airbus. We think this cluster will continue to grow as the aerospace sector expands in the region.

BIF: What measures are being taken to ensure the State of Alabama has continued success?
GC: Alabama’s economic development efforts are already getting a boost from an overhaul of the state’s incentives platform that just went into effect. The new “Made In Alabama” incentives package gives us the ability to better incentivize job creation and features a “pay as you go” approach that allows us to reduce our reliance on borrowing for incentives. That makes Alabama more competitive.

We’re also making significant improvements to workforce development in Alabama. Governor Bentley formed the Alabama Workforce Council, made up primarily of business leaders, to develop recommendations on how to improve educational outcomes and better prepare Alabamians for the 21st Century workplace. These reforms will have a major impact going forward.

Alabama is working hard to position the state as an ideal location for companies with new-facility projects, and we are using a proven team approach to strengthen partnerships with expansion-minded companies already in the state.

BIF: Tell us more about Alabama’s workforce and its level of preparedness for incoming businesses.
GC: Alabama is known for its strong workforce development programs. AIDT, a division of the Commerce Department, is consistently rated one of the top state workforce development agencies. Over four decades, AIDT has assisted thousands of companies, ranging from shipbuilders to steelmakers. It helped prepare a workforce for Alabama’s auto industry, and now it’s doing the same for Airbus.

In addition, Alabama’s educational system, starting with the K-12 system and going through community colleges and four-year universities, is being more fully integrated into workforce development initiatives. This deepening partnership will help Alabama meet any workforce challenges that arise.

BIF: What is the quality of life like in Alabama for incoming business owners and employees?
GC: Alabama really has something for everyone. The state boasts beautiful scenery including pristine wind-sand beaches, crystal-clear lakes, mountains perfect for hiking, and many other recreational spots. The Robert Trent Jones Golf Trail, a network of premier courses across Alabama, attracts golfing enthusiasts from around the world. For race fans, there’s the Talladega Superspeedway and the Barber Motorsports Park, home to a renowned motorcycle museum and a track that plays host to an Indy Grand Prix race.

BIF: What do you see for the future of Alabama? Where is the state headed? What needs to be done to ensure future success?
GC: Alabama’s economy is headed in exciting, new directions, and we continue to see world-class companies come to the state. Earlier this year, Google announced plans to open an ultra-modern data center that will be powered by renewable energy. RUAG, a leading European space company, is opening an Alabama manufacturing facility to produce composite rocket components. Airbus is ready to assemble its first passenger aircraft in Alabama. Mercedes, Honda, Hyundai and Toyota continue to grow.

At the same, Alabama is being seen as an attractive place for knowledge-based jobs. Boeing is just one of several companies that have recently opened advanced research centers in the state. We also expect to see continued growth in bioscience fields, thanks to the research being performed at places such as UAB, Southern Research and the HudsonAlpha Institute for Biotechnology.

BIF: Any closing thoughts?
GC: I think what is going on in Alabama today might surprise some people. Engineers and scientists at NASA’s Marshall Space Flight Center in Huntsville are working on the most powerful rocket ever designed, and it could eventually take man to Mars. Workers at the United Launch Alliance facility in Decatur assemble the Atlas V and Delta VI rockets that blast satellites into orbit. Austal’s shipyard in Mobile produces warships for the U.S. Navy. Automobiles made in Alabama were exported to 99 countries last year.

These developments, and more, are driving Alabama toward a bright future.