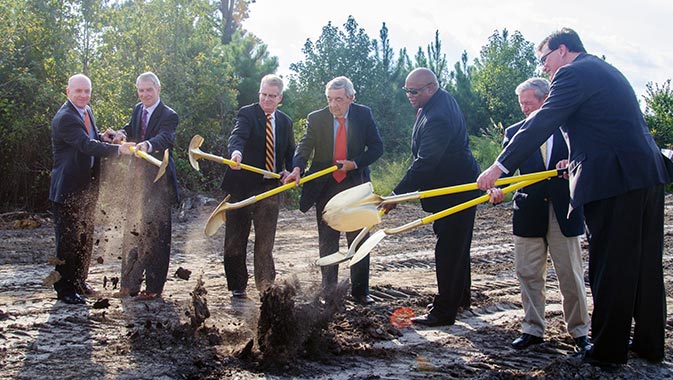 Darlington County, the subject of the Bruce Springsteen song of the same name, was one of the first counties established in the United States. Despite a population of fewer than 69,000, this South Carolina county has been able to draw some impressive numbers when it comes to capital investment. Business in Focus spoke with Executive Director for Economic Development at Darlington County Frank Willis to get the full story.
~
Darlington County’s roots go back to the 1700s when it was one of the first inland counties to be settled. Early settlers, mostly German and Welsh immigrants, also settled in Georgetown and Charleston, creating a highly agrarian society that survives to this day.

The Pee Dee River runs through the county and was a vital trade route for river boats, leading to the growth of Darlington County. “It grew because of the river, and it had a place for riverboats to land. The river runs to the port at Georgetown,” says Willis. This trade route was beneficial for the early days of Darlington as it provided markets for important crops like tobacco and cotton.

The coming of the railroads halted this. Darlington lost some of its value as the railroads took over as the primary source of transportation for industry and started a migration from Darlington to Florence, where the rail hub was. Darlington stabilized as an agricultural centre, and that still holds true today.

“Transportation has always been a key player in our history and our economy,” Willis explains. Darlington County is served by two interstates, I-95 running north-south from Maine to Miami and I-20 running east-west to San Antonio.

“Until we acquired the two interstates, there was not much in terms of a natural draw that worked to entice investment to Darlington. However, we are home to Sonoco – which is a Fortune 500 company. It’s their world headquarters. They started out in the late 1800s as Southern Novelty Company, which is where the name Sonoco comes from.” Sonoco (not to be confused with petroleum company Sunoco) is the largest industry in Darlington by far. In fact, it is one of the largest in the state.

Nucor Steel (known for making America’s biggest flagpole) is another Fortune 500 company with headquarters in Darlington. It is one of the largest rolled steel bar manufacturers in the nation. Another significant employer is Duke Energy which has a nuclear power plant in the county.

The primary goal now is on strengthening the manufacturing sector as it makes a comeback. Planned manufacturing activity will concentrate mainly on the automotive and aeronautics fields. Volvo just announced a $500 million facility in South Carolina that is expected to generate ancillary businesses and suppliers in other parts of the state.

Due to proximity to the two interstates, focus is also on warehousing and distribution centers along with increasing agri-business. Companies like Ruiz Foods are nearby and Darlington County is working very hard to recruit and build up this industry. The county is unlimited in the types of industry it can approach because of its transportation system.

“Industry needs quick, easy, cheap transportation. We are in an ideal situation for almost any industry because of the ability to access the two interstates. We are only two hours to the largest container port on the east coast in Charleston. We are well situated from a standpoint of being able to offer global transportation opportunities.”

Darlington County is well known for the Darlington Raceway. For NASCAR fans, this is considered one of the important destinations for the sport. “The track too tough to tame” has a storied history that goes back to 1950. Legends like Richard Petty and Dale Earnhardt raced this track, and the opening sequence for Days of Thunder with Tom Cruise was filmed here.

Darlington County piggybacks on a new online computer program used by the South Carolina Department of Commerce. This system assists prospects with up to date information. Users can gain access to incentive programs, training programs and funding programs or anything that the state and county might offer in the way of assistance.

Darlington County also collaborates with NESA (North East Strategic Alliance).This nine county umbrella organization does much of the work that an individual county cannot perform – or afford. “I don’t have much of a budget for travel, as it is very limited,” says Willis. “I can’t go to a lot of trade shows, but NESA will and can, and they help us with a lot of funding.”

As to what Darlington County will look like in twenty years, Willis foresees a significant re-emergence of the manufacturing industries due to the two interstates. “I think we are going to see a lot of growth in manufacturing,” he shares. There will also be varied manufacturing, and that diversity will bode well for the county.