Kickstarting Growth in Oil and Gas 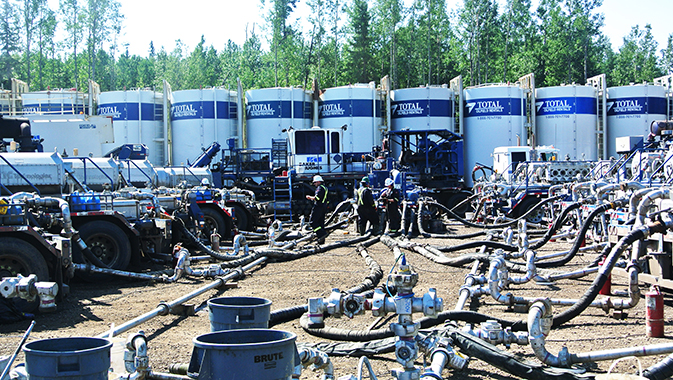 Kicking Horse Energy has extensive holdings in the Deep Basin of Alberta – and has engaged leading edge technology to make the most of these assets. Up ten times since last year, the oil and gas company’s production rate is enjoying rapid growth, setting the company on a path for lasting success.
~
The stage was set six years ago, when the oil and gas company Contract Exploration veered dangerously close to bankruptcy. With assets based in Atlantic Canada, the company’s primary property, Stony Creek, was the second oldest oil field in the nation and considered by most to be long past its prime. Steve Harding and Raymond Sully thought otherwise. “The more I looked at it, the more I thought it still had reasonable life left in it, especially if we could effectively bring new technology to that oil field,” Mr. Harding remembers. The two entrepreneurs took over the company in 2010 and began turning it around immediately.

Soon, Contract Exploration had two very successful wells in Stony Creek. “That got us started. And then we continued to build in New Brunswick, establishing a new oil pool some nine kilometres from the old field. That became the leverage that got us back out west into the Deep Basin of Alberta.” The team retained its assets in Atlantic Canada, but expanded into the lucrative liquids-rich Montney Formation in Alberta where Raymond Sully and the Company’s then newly hired VP Exploration Mark Hadley also had much expertise. This effectively took the company to the next level.

In December of last year, Contract Exploration merged with Donnycreek Energy in order to combine assets and increase production within the Deep Basin. Rebranded as Kicking Horse Energy, the newly merged company holds more than 350 net sections, including a 75 percent interest in approximately 21 sections of Montney-focused acreage at East Kakwa.

The East Kakwa asset alone has room for more than 100 more horizontal wells before the lands are fully developed, providing a solid production base to leverage into the company’s additional Montney acreage within the Deep Basin.

Kicking Horse’s advanced technical ability is helping the company make the most of its new assets. “We consider ourselves to be a very technical company,” Mr. Harding remarks. “We are technical not only in the geotechnical sense but also in terms of how we drill and complete wells, so operationally we are quite technical.”

Using this well-rounded technological expertise, the team has managed to introduce a new approach to hydraulic fracturing in the region. “With the insight of completions wizard Paul Poohkay, we successfully pioneered a new fracking strategy in the Montney. We integrated a system that had not been used at the depths required for the Montney at Kakwa and have now set Canadian records for most fracks per well.”

Even though Kicking Horse is a relatively small fish in a big pond, the company’s technical breakthrough has given it a substantial advantage. “Technically we have surpassed our peers and competitors around us,” Mr. Harding reports. “And that started from the very beginning because we got into this area before others thought it was commercial. And the reason we got there early was because we did a lot of very good science at the time, which not only led us to the area, but allowed us to get in very inexpensively and acquire a relatively large position. So I think the strategy that we have used is one of superior technical work and using the best of what industry offers in terms of services to make our wells strong and commercial.”

NCS Multistage Unlimited – the technique that Kicking Horse is utilizing in the Deep Basin – has been used by the industry for years, but only in areas where the reservoir was relatively closer to the surface. “When we first started looking at this, it was thought that you would not be able to take this technology down below about 4,500 metres measured depth,” Mr. Harding recalls. “And we were drilling wells that were close to 6,000, so it was thought that it really wasn’t going to be an effective technology for us.”

The team decided to test the limits of the technology – and made a startling discovery. “We learned from measurements that were taken with this technology while we were using it that there is no technical reason why we shouldn’t be able to take the tool down much further.” In early 2015 the team put their theory to the test by introducing the technology into deeper wells. “We started using this on very big wells; initially a well that was a little over 6,100 metres of measured depth – and we had no difficulty deploying the technology at that depth and length. And since that time we have used it on all other wells in their entirety and have had very good success.”

While the scenario sounds simple enough, hydraulic fracturing is a complicated procedure, and successfully pushing a technology to deeper depths is far from straightforward. “There are a lot of different components,” Mr. Harding explains. “You need to know how much sand or ‘proppant’ to put into the rock, you need to know what pressures are needed to break the rock down and, most importantly, you need to know how far apart to space your fracks.” Fortunately, the team’s experimentation paid off. “It has helped us much better understand the reservoir and also better understand how to make wells perform.”

Kicking Horse continues to successfully carry out multistage fracking jobs within all its Montney wells. “We conduct very large frack jobs, at times more than 80 stages per well, enabling wells that are both stronger and better performers than most others.” One of the keys to success is the fact that the technology the team has harnessed is remarkably precise. “It allows you to systematically break the rock in one very specific spot at a time, and you know exactly how that rock will break when you pump the fluids into it; you know exactly where it breaks, when it breaks, and at what pressure. A lot of other technologies don’t break the rock so predictably.”

New technology is always being tried and tested in the high stakes world of hydraulic fracturing, but the team is convinced that they have found the best procedure for the job – at least for now. “Completion technology is only continuing to evolve,” Mr. Harding points out. “It is going to only get better and better with time. At this point in time, this is certainly what we believe to be the best technology for what we are doing and how we are doing it. We see this as state of the art technology for the Montney at our depth. That isn’t necessarily going to be true for everyone in every scenario, and my guess is two or three years from now there may be a new latest and greatest technology that many people will want to deploy. But right now we think what we’re using is fantastic. It is working very well.”

Kicking Horse relies on a young team that is able to harness the latest technology in new and untried ways. “Most of the people who work here are in their 30s and early 40s; we have a dynamic, engaged group that are very savvy and very business focussed,” Mr. Harding shares. “We all come from very different spaces, but we are all characterized by a strong technical background. That makes such a big difference when you are dealing with such technical plays. It is an important component.”

Armed with an industry-leading team of technical experts, Kicking Horse is well prepared to continue its success throughout the Deep Basin. The low price of oil is certainly creating challenges, but the company is fortunate that its approach is relatively affordable. “We can sustain much lower prices than most in this environment,” says Mr. Harding.

Even so, the drilling of new exploratory wells has slowed awaiting a more favourable market. “It [the low price of oil] does slow down your ability to do new things. We are spending far less right now on that style of growth because we need to weather the storm… Our development project is quite robust, quite strong, but it is not as easy to be exploratory at this time, so we have to move a bit slower.”

Mr. Harding remains optimistic, however. “The project that we are involved with [is] in the heart of the best, most condensate-rich part of the Montney, and because of that, we can sustain low prices.” He believes that, despite the current challenges, the company will be able to ramp up expansion sometime next year. After successfully bringing a company back from the brink of bankruptcy and applying a new technology to the Deep Basin, it looks like the team’s winning streak is only beginning.