Changing the Face of Manufacturing 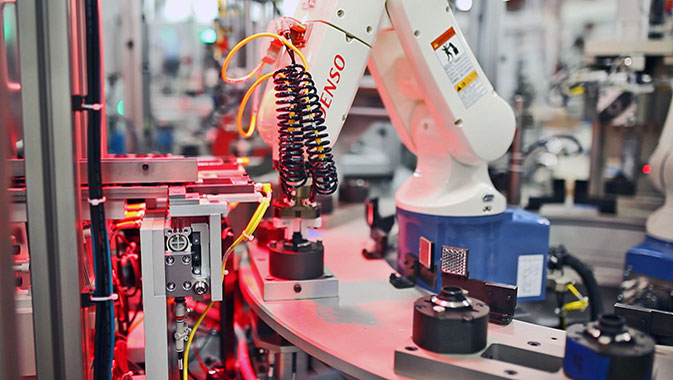 St. Joseph, Michigan-based Edgewater Automation engineers and builds custom industrial automation equipment. It creates innovative automation solutions and quality equipment for clients in industries such as energy, transportation, consumer products, life science, agricultural equipment, heavy equipment, food and retail.
~
Since it was founded in 2001, the company has grown from just five employees to a skilled team of 135, including mechanical design engineers with experience in custom machine design; electrical design engineers with skills in robotic programming; machine builders; and in-house machinists to ensure projects are completed to customer satisfaction. Every system is fully tested and operational before leaving the building.

“We are a cradle-to-grave systems integrator,” says Stephen McLaren, regional sales manager for Edgewater Automation. “We can design, design and build or build to print. And we have the capabilities for a turnkey system that our customer might require those three different scenarios. So if Customer A says, ‘I want a system to, say, assemble your iPhone,’ we have in-house capabilities to concept, engineer, manufacture, test and validate for the customer that assembly system.”

The highly experienced team at Edgewater can not only design and build custom automation equipment, but provide quality manufacturing solutions to help provide customers with a competitive marketplace advantage. The team works with clients at all stages, from design to building, assembly, testing and more. To ensure smooth and uninterrupted progress, all turn-key projects are professionally managed and any challenges are addressed immediately and communicated to customers.

“The process usually starts when the [client] company is already established and has automation requirements either due to new product launch, increase in production or need, and they are looking either to expand or add automation to the process,” says Business Development Manager Seth Vander Ark. “Generally, the companies we deal with are already established. They are manufacturing a given product, and then we are either called in to help with their expansion of that. And the process starts off with, generally, a site visit from our sales engineers and also a site visit for the potential customer to tour our facility and meet our team members.”

Handling all system assembly and electrical requirements, Edgewater Automation leaves nothing to chance – from project management and engineering to manufacturing and complete customer service. At the onset, a single point of contact is established, which continues throughout the duration of the project. Edgewater Automation has earned ISO 9001:2008 Certification for its Quality Management System. The ISO 9001:2008 standard is based on a number of quality management principles including a strong customer focus, the motivation and implication of top management, the process approach and continual improvement.

According to Seth Vander Ark, systems are rigorously tested at the company’s modern facilities before being delivered to customers. “Generally, the customer will have their system built on our floor,” says Vander Ark. “They will come in, and validate that it is a functioning production piece of machinery to their specifications. The system is then torn down and reassembled on their floor.” From there, a start-up procedure is initiated at the customer’s facility, followed by a handoff of the final system.

Edgewater Automation continues to expand its roster of talent and service offerings. Designing automated systems through sophisticated programs such as Solidworks 3D and AutoCAD, engineers work closely with the manufacturing department to ensure all project aspects are addressed, from machining to fabrication, mechanical and electrical components, fluid power, panel build, system integration and debugging to installation and factory acceptance.

Edgewater Automation was created in 2001 by President Rick Blake to provide innovative solutions and quality service to meet the needs of customers in many diverse industries. The company was founded with assistance from the Manders Group – a collection of seven independent worldwide companies that provide ‘integrated systems and installations for industrial automation’ – along with help from the State of Michigan and local government. It is an integral part of the Manders Group which employs over 350 staff in five countries and has considerable expertise in automation, machine building and process technology.

“This allows us to reach European, Asian and South American markets,” says Vander Ark, “and the Manders Group also consists of similar competencies, so we share resources. If a system is installed in Poland, for example, our group will go and install it, and the after-sales and after-market support may happen from one of our group affiliates.”

The company credits much of its success to its team members, capabilities and facilities, and Vander Ark says one of Edgewater’s “best sales tools is its facility.” Systems are built on clean, bright assembly floors that demonstrate Edgewater’s commitment to quality. Currently, the company has over 145,000 square feet across four locations in two states.

As it has the capabilities to take on a variety of projects, the privately-held company has worked with all of the top five robot manufacturers, including Kawasaki. The Japanese firm is leading supplier of robotic automation systems and industrial robots and has installed over 139,000 robots worldwide. At present, Edgewater is working with Kawasaki Robotics on a new collaborative robot venture.

“We are talking about an opportunity for both of our companies to help with their collaborative robot initiative,” comments Vander Ark. “It’s going to work in two different industries, with two separate projects. One would be in consumer goods industry for assembling multiple parts using a collaborative robot, and the collaborative robot is called a duAro [a revolutionary new dual-armed SCARA robot intended to work alongside humans]. And the second one would be an electronics division, again for an assembly application.” The venture will bring together technologies from both Edgewater and Kawasaki.

Along with many repeat clients, the company has earned a number of awards for its efforts, presented by agencies ranging from a local chamber of commerce to the State of Michigan. It has also been listed on the Inc. 5000 Fastest-Growing Private Companies in America list in 2007, 2008 and 2012 and received the Technology Award at the Delphi Automotive PLC Global Supplier Conference & Pinnacle Awards in 2014.

“A lot of these awards are based upon our growth,” says McLaren. “The most recent award we received from Delphi, was based on our capacity for innovation.” As it maintains strict schedules and quality, the company is also well known for client satisfaction and repeat business.

Edgewater Automation continues to grow, and aims to employ two hundred people in the coming years. “We have a pretty aggressive sales forecast that would probably drive that many employees,” says Vander Ark. This will happen as it continues to add locations, particularly in the Southwest.

Edgewater Automation strives for excellence with every project it takes on. From experienced installation and start-up support to training and remote troubleshooting, Edgewater Automation’s customer service is second to none. It takes on servicing and repair through its own people and assists clients with everything from spare parts to operational questions and more.