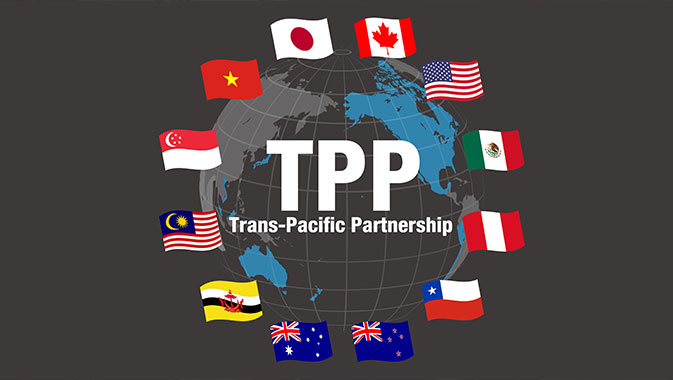 After eight long years of negotiations, one of the most comprehensive trade agreements ever has been reached between 12 participating countries. The Trans Pacific Partnership (TPP) has been successfully negotiated between Canada, Australia, Brunei, Chile, Japan, Malaysia, New Zealand, Peru, Singapore, Vietnam, Mexico, and the United States, and will have a significant impact on a number of industries.
~
A deal that encompasses a number of economic sectors, the TPP could serve to deepen Canada’s economic ties with some of the most dynamic, rapidly growing countries in the Asia Pacific. This deal spans a combined market of 800 million people with a GDP totalling $28.5 trillion. Canada now boasts access to 60 percent of the global economy.

Canada has signed free trade agreements with 51 countries total, the only country to have this level of free market access. Tariffs and export restrictions have traditionally limited the potential of key markets and the TPP is expected to act as a catalyst for growth for export dependent industries.

Though the TPP could broaden opportunities in these industries, it remains to be seen if Canada will be able to effectively maximize the benefits associated with the competitive advantages of the agreement. The measures may prove to be temporary market incentives that promote economic growth and sustainability, but many industry bodies are optimistic about the potential benefits of the deal.

The TPP will eliminate tariffs in the Asia Pacific region that prevent industries from reaching their full potential, affording Canada a competitive advantage over the EU, Russia, and China. The TPP contains strong provisions on non-tariff measures and will help to develop technical regulations and standards while eliminating barriers to trade and economic prosperity, ensuring industry-wide gains are made.

One industry of particular interest in this context is the Canadian forestry industry, a sector that has been hard hit by trade disputes in the past, such as the ongoing softwood lumber dispute between Canada and the United States. The TPP could serve as an opportunity for the Canadian forestry sector to further diversify markets and expand its export capacities.

Canada is the world’s largest producer and exporter of softwood lumber and newsprint, and the fifth largest producer of wood panels. Canada enjoys a strong value-added industry for coniferous lumber, plywood, windows, and doorframes. Forestry is a $58 billion a year industry that represents two percent of Canada’s GDP and employs 230 000 highly skilled, direct jobs. The TPP could offer a competitive advantage for Canadian producers, processors, and exporters over non-TPP members, reinforcing the country’s participation in key North American value chains. Canada exports $22 billion a year to TPP countries; while the TPP is a means to generate new opportunity, it does have the potential to further complicate softwood lumber tensions between the United States and Canada.

The agreement with the U.S. falls outside of the confines of both NAFTA and the TPP, so the TPP does not stand to resolve the long running dispute with the United States. In fact, it would deepen tensions that are fuelled by what the U.S. forestry industry believes are unfair industry advantages enjoyed by the Canadian industry, which are further exacerbated by Canada’s export restrictions.

A softwood lumber agreement was reached between the two countries in 2006 after significant negotiations took place. This agreement ended five years of court battles and returned $4 billion in duties that were collected by the U.S. on Canadian producers, $2.4 billion of which was allotted for producers in British Columbia, a market that represents over half of Canadian production. The 2006 agreement expired on October 12, 2015, and resulted in both parties resuming pre-2006 tensions. The expired agreement included a standstill clause that prevents any trade action against Canada from taking place for a year; thus, Canada will benefit from duty free transactions for a year. Paired with the weak Canadian dollar, these advantages will not be well regarded by the United States.

U.S. industry groups have long claimed that Canada has unfair advantages and have accused the Canadian industry of subsidizing production. Due to government control of Crown Lands, in addition to regulations regarding log prices and restrictions imposed upon private and Aboriginal log producers, the U.S. industry feels that this form of Canadian protectionism affords an unfair industry advantage.

Both countries claim to be willing to re-negotiate a deal but neither side has come to the table to reach a mutually beneficial solution. Though the U.S. remains both a cheap and accessible market, as well as B.C. producers’ largest import/export market, the Canadian industry has found ways to diversify. China, for example, is a growing market segment for the Canadian Forestry industry. In 2006, the U.S. market represented $4.3 billion in exports whereas exports to China totalled $82 million. Flash forward to 2014, and exports to the U.S. totalled $3 billion while the Chinese market grew to $1.42 billion.

In the past, forestry related trade disputes with the U.S. have had a serious impact on the Canadian forestry industry, with layoffs and penalties resulting. A growing Chinese market, the increasing market diversity associated with the TPP, and increased Canadian ownership of U.S. mills shows promise of mitigating these impacts into the future. Not only does an increasingly diverse export market bode well for the Canadian industry, Canadian producers no longer pose the same threat to U.S. producers they once did. Given a shrinking supply and subsequently increasing log prices, it is harder for U.S. industry bodies to accuse Canada of unfair competitive advantages and the dumping of cheap wood in their market.

The TPP could serve as a major support for many export dependent industries, such as forestry. Beyond the elimination of tariffs, the TPP has the potential to address supply management issues that have plagued Canadian industry, as the federal government restricts log exports, with additional regulations coming from the B.C. provincial government. A domestic price is offered and in accordance with a surplus test in the province, remaining product can then be sold to the international market. In some cases, international log sales are the only way for these producers to turn a profit.

The TPP could play a role in the elimination of these seemingly protectionist trade policies which have historically contributed to trade related tensions in the industry. These tensions are not specific to the United States, as they have also impacted trade relations with Japan.

Canada is currently the fourth largest supplier of forestry and value added wood products to Japan, a country for which exports averaged $1.7 billion over the years 2012 to 2014. The TPP will eliminate up to six percent of tariffs on lumber within 15 years in Japan, up to five percent in Australia, and an astounding 20 percent in Brunei and upwards of 30 to 40 percent in Vietnam and Malaysia. These changes will allow for Canadian softwood to serve as a substitute for tropical hardwoods. Additionally, the TPP will also establish a Sanitary and Phytosanitary (SPS) Committee to enhance cooperation between countries. Technical requirements and standards will be created to facilitate trade relations to mitigate any unjustified SPS related barriers to trade that may arise.

The Forest Products Association of Canada (FPAC) is a leading Canadian industry body that is pleased that the TPP agreement has been reached and is optimistic that the TPP will serve as a catalyst for the industry’s success moving forward. The Council of Forest Industries (COFI), the voice of the B.C. interior forest industry, is also encouraged by the signing of the TPP.

Both organizations are encouraged by the elimination of tariffs and the opening up of markets, as well as the role the TPP will play in reinforcing already productive trade relationships. Many industry organizations are of the belief that Canada cannot afford not to participate in this agreement.

In addition to being a leading global producer and exporter of forestry and value-added wood products, Canada is also a global leader in sustainable forestry practices. Bio-based innovations could drive the next wave of industry growth and when paired with the TPP could assist Canada in meeting goals associated with the Vision 2020 Program spearheaded by the Canadian forestry industry.

The industry has set ambitious goals in the areas of economy, environment, and employment, and has set its timeline for the decade ending in 2020. The goals are to generate an additional $20 billion in economic activity through new products and markets, while improving the sector’s environmental performance by a further 35 percent and adding 60 000 more recruits to the workforce.

The benefits of this initiative are reported on by FPAC every two years, with actual industry gains being made thus far. By extracting more value from each tree harvested, the industry is finding new and improved ways to incorporate sustainable practices. The industry has been able to reduce its reliance on fossil fuels, with pulp and paper mills reducing emissions by 65 percent since 1990, while renewable forests help to absorb CO₂ being produced. Canada has 160 million hectares of forest that are independently certified in accordance with social and environmental practices – four times more than any other country, accounting for 43 percent of global totals.

At a time when tensions remain high with Canada’s largest export market, the U.S., the TPP is expected to diversify the industry and could enable Canada to impart global industry changes that will increase the adoption of environmentally friendly and sustainable forestry practices. The TPP stands to eliminate tariffs, increase productivity and output, and infuse a greater sense of responsibility in the industry. What remains to be seen is how Canada and the rest of the world will be able to capitalize on the benefits of this agreement and to what extent trade relations will be bolstered.