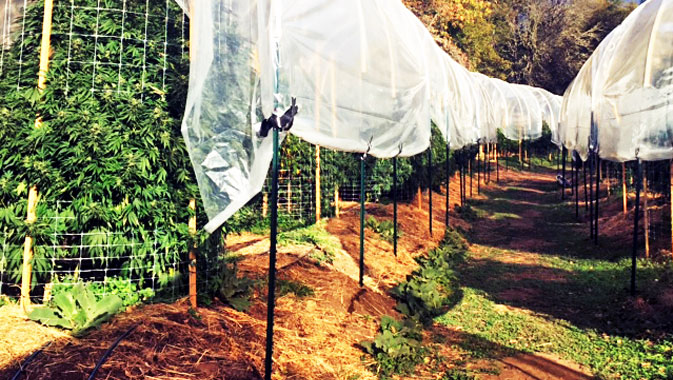 Highly Distributed of Oregon is composed of a highly motivated team of individuals who strive to educate the public about the beneficial properties of cannabis. Today, the company is poised to distribute this plant for both recreational and medicinal use.
~
There are, however, a number of hurdles to surmount, as the plant is still illegal on a federal level, banks are hesitant to do business with any purveyor of cannabis, and many stereotypes still persist. We spoke with President and CEO Chris Malott and Vice President of Sales Whitney Hobbs, Vice President of Sales, who tried to dispel some myths associated with the plant and the legalization process in Oregon.

It was not that long ago when the possibility of marijuana legalization seemed farfetched. Today, the states of Oregon, Colorado, Washington and Alaska have legalized cannabis for medical and recreational use.

Oregon agreed to temporary marijuana sales for adult recreational users in a bill that went into effect on October first. The new bill which allows for the sales up to a quarter ounce of dried marijuana leaves and buds per day from existing medical dispensaries. Recreational users may also buy immature plants and seeds but cannot purchase concentrated forms of the drug or other marijuana products such as food items.

Whitney Hobbs previously worked as a sales representative for a CO2 oil company called POP Naturals in Oregon. She saw that there was inefficiency in delivering a single product and had envisioned a larger wholesale model. She met with Michael Johnson and Jamin Giersbach in May, and Chris Malott joined a month later. Together, they started to build the infrastructure needed to apply for a license and to be able to handle the anticipated number of transactions. Highly Distributed then began in May of 2015.

“One of the hallmarks and cornerstones of the cannabis industry is that it is a rapidly changing industry. In Oregon, for example, the rules have not even been finalized for what the OLCC (Oregon Liquor Control Commission) licenses are going to look like, as it is still evolving.”

The OLCC has begun to accept license applications in January 2016, and has issued temporary rules addressing recreational marijuana. Other states are soon to follow, and this creates the possibility of a thriving new industry. Those organizations which are prepared will reap the benefits of this new cash crop.

Highly Distributed has facilities in Portland and Southern Oregon and is confident that the licenses will be acquired for both locations. Work is underway to support and encourage the suppliers in meeting the licensing requirements, yet there is still much work to be done.

For the most part, Oregonians voted in favor of cannabis legalization, although there are some communities, particularly in areas with a more conservative outlook, that prohibit its sale. However, the biggest problem Highly Distributed encounters on a day to day basis stems from conflicts with federal regulations. Cannabis is still federally illegal, and the banks must be Federal Deposit Insurance Corporation (FDIC) insured. There are very few banks that will serve cannabis companies.

Section 280E of the Internal Revenue Code affects businesses dealing in controlled substances. All cannabis companies cannot deduct ordinary business expenses. “Cannabis companies are really treated in a way that I would call punitive. Another enormous challenge for companies in our space, particularly in Oregon is banking.”

Deputy Attorney General James M. Cole released guidance regarding marijuana enforcement that is widely known as the ‘Cole Memo’. It says that jurisdictions that have implemented strong regulatory systems to legalize cannabis are not a threat to federal interests. The memo also gives discretion on whether or not to prosecute. The Department of the Treasury’s Financial Crimes Enforcement Network (or ‘FinCEN’) allows financial institutions to serve cannabis businesses where they are state-legal, although the organizations must file suspicious activity reports “if the bank knows, suspects, or has reason to suspect that: the transaction involves funds derived from illegal activities or is intended or conducted in order to hide or disguise funds or assets derived from illegal activities.”

The lack of clarity in the laws leaves banks fearing that they may face charges aiding illegal enterprises. “If a bank, banks cannabis and fails to adhere to the Cole Memo, then they could lose their FDIC insurance. A lot of banks do not want the risk.”

Chris believes that as more research is performed, the stereotype of cannabis as dangerous will dissipate. “Cannabis certainly has a much lower toxicity threshold than alcohol and other drugs. It’s really much more of the duality of the experience that we live in, which is very controversial from the federal to a state perspective.”

Cannabis is classified as a Schedule 1 substance which is the same category that includes heroin and LSD, and this is what is holding back research into potential uses. There is hope in the industry that the drug can be rescheduled and perhaps moved it into the Schedule 2 category. This would be helpful in both mitigating banking issues and making it available for study.

The strategy of Highly Distributed is to attack all aspects of the cannabis market. “With the limited recreational sale, obviously, there is going to be a higher demand for some products than for others, but we look to Colorado and Washington for guidance on those kinds of products in high demand.” Edibles and oil-infused products account for over fifty percent of market demand in Colorado. Other specialty products that Highly Distributed brokers to dispensaries on behalf of its suppliers include medicated cough syrup, transdermal patches and chocolates.

Oregon’s approach to legalization is unique. The state has been the careful in developing a legal market that mirrors traditional businesses closely. Unlike other states, Oregon allows access to licenses in multiple categories and does not limit the number of permits that can be issued.

“By having a market that is progressively open and composed of a more traditional model, it will allow Oregon to not only establish itself as a leader in cannabis cultivation, production systems and technology, but it will also outfit this market to flourish and embrace what I would call a micro-grow economy. It could be much like Oregon’s very rich micro-brew economy.” Chris expects that other states will borrow from Oregon’s approach when looking for an effective way to approach the industry.

Relationships with customers and suppliers are the life’s blood of Highly Distributed. “We are definitely trying to set the gold standard through people, process and technology. We have worked very hard to bring on specific people to our team so that we could attract the type of companies that we would want to work with and also attract the retail customers we want to work with.”

Highly Distributed has salespeople in Portland, Central Oregon and in the South. There are multiple areas for acquiring supplies and a lot of the outreach and development is exactly what would be expected from any other business. The strategy for Highly Distributed is to bring together some of the best brands in Oregon and to approach the business through a sustainable and environmentally conscious model.

“It’s all about relationships and developing, managing and effectively engaging. There is a very interesting thing about this community. A lot of folks have come from the unregulated market where there were no contracts, no agreements and no stipulations about how things were going to work, time frames and the like. That said, I found that in this industry, the strength of your character and integrity carries tremendous weight with a lot of the entrepreneurs.”

Highly Distributed hopes that interstate commerce will begin in five years and that, in ten years’ time, the country will embrace and legalize cannabis at a federal level. Oregon is highly suited for cannabis cultivation. There are only a handful of regions in the world that have the perfect climate to cultivate high-quality cannabis in large quantities. Southern Oregon is such a place.

“We expect that Oregon will be a leader in cannabis production both on a national and international level. We have some really fantastic research institutes like Oregon Health & Science University and the Knight Cancer Institute. Oregon is very well positioned to capitalize on these opportunities and on this new industry.”

Highly Distributed is among the first Clean Green Certified businesses in the market. As the USDA does not recognize cannabis as a legal crop, organic certification is out of the question at this time, so Clean Green Certified has stepped in as a certifier for organically grown cannabis. “We very much support environmentally sound and sustainable cultivation practices. We are excited to be one of the first companies to attain this designation.”

Fifty percent of all staff is women, which is important to Chris. He is Hispanic and wants to make sure that minorities and women are being represented in this new industry.

Highly Distributed is quite active in advocacy and is part of the Oregon Cannabis Political Action Committee as well as being part of the ‘Women Grow’ group that hopes to serve “as a catalyst for women to influence and succeed in the cannabis industry.” Representatives have been to Washington, D.C. on multiple occasions to lobby on behalf of the industry, particularly regarding issues such as banking and the taxation of illegal income.

“We are very proud of our participation in the cannabis PAC with community involvement, and we testify at local and state government levels. We really want to do the right thing and be stewards of the industry.”