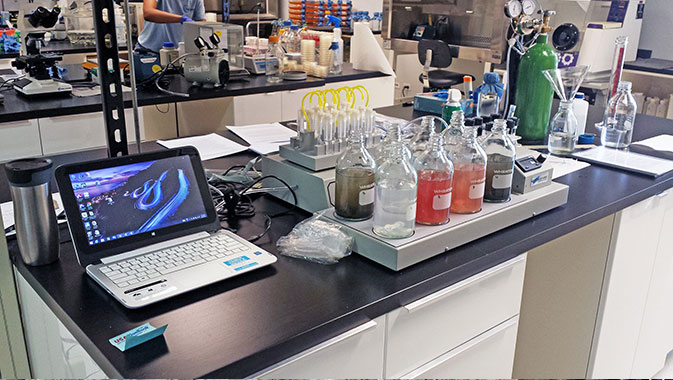 Dealing with waste such as biomass from food processing, organic solids, fracking production wastewater, metals, industrial contaminants and sludge in water systems is time-consuming and costly. Many municipalities, food processors, chemical and pharmaceutical companies, the military, agribusiness and the oil, gas and mining sectors require expensive systems or the hauling away of sludge for disposal. Such methods are not only cost-prohibitive but often bad for the environment.
~
BioConversion Solutions, LLC (BCS) has the systems and solutions to transform dealing with biomass from an expense into profit for cities and companies worldwide. Instead of sludge requiring treatment and disposal, BCS has developed sophisticated technologies that allow customers to design, build and operate biological conversion plants.

BCS (formerly known as PMC BioTec) was founded in 2003 by organic bioconversion expert and author Dr. Alan Rozich. The company uses sophisticated biotechnology processes that are custom-tailored to the specific needs of sectors such as city wastewater, chemical or food processing. BioConversion Solutions works closely with clients to create systems that will boost productivity and profit while reducing costs.

“The process is based off of work that was done thirty to forty years ago,” says Rozich. He says that a combination of physical and chemical processes can be applied to biological systems to increase conversion rates.

“What that translates into, in our space, is that you can change the operation of biological systems, so they produce little or no sludge. And the way that we make that work, that we use existing anaerobic digesters. Instead of getting forty to fifty percent conversion, we get up to eighty to ninety percent.”

In his recent book, Other Inconvenient Truths Beyond Global Warming, Rozich posits that while global warming and CO2 (carbon dioxide) emissions are a significant concern, there are other factors affecting society which “are much more likely to adversely impact human civilization far sooner than global warming.”

“The book tries to give a more pragmatic explanation of global warming and man’s contribution couched as a resource problem, not as a CO2 issue,” he says. “It is still a CO2 issue, but the core is resources – and the thesis of the book – is that we need to use renewables in order to correct the economy first. And when you correct the economy and the resource crisis, you self-correct global warming.”

Water treatment and sludge collection, treatment and disposal are issues in numerous industries and cities worldwide. In nations such as China and India, there is a great deal of competition for resources, and as the emerging middle class grows, there is increased demand for goods and foods, including resource-intensive chicken and beef. As fertilizer is required to produce the fodder for these animals, worldwide demand for phosphorous – the primary chemical element in fertilizer – has grown in recent years. This massive demand, combined with the depletion of many of the world’s phosphate-producing mines, has led to a jump in prices.

The technology of BioConversion Solutions reduces not only the amount of sludge to be hauled off, but results in a high-grade fertilizer. This creates a profitable by-product and a market which did not exist twenty years ago.

“We have a multi-component revenue stream with this new technology,” says Rozich. “More and more engineering companies are seeing the value proposition of the company, particularly the fertilizer revenue aspect, which is extremely effective in small plants. This can be very profitable for us and the customer. It is a very interesting twist that we didn’t foresee.”

Exton, Pennsylvania-headquartered BioConversion Solutions has a skilled management team with over a century of combined experience in the wastewater treatment arena. The company was acquired in July of 2014 by In-Pipe Technology® Company, Inc. For the business and its clients, the acquisition provided an opportunity for related technologies to work together.

“This is a very important and synergistic technology for In-Pipe,” said the company’s President and Chief Executive Officer John Williams at the time. “BCS’s processes complement our technology very nicely and adds to our consortium of sustainable, environmentally friendly technologies.”

In-Pipe brought numerous benefits including a patented high-concentration formulation of ‘facultative, naturally-occurring, non-pathogenic bacteria.’ This is added throughout a sewer system and does not require additional energy, improves lives within plants, increases capacity, and delays expensive and time-consuming upgrades by extending the life of existing infrastructure.

Williams has been active in the water industry for over thirty-five years in both start-ups and longstanding corporations in over forty countries. “I’ve spent my whole life in the water spot, while Al Rozich has spent a good part of his life in the university setting,” says Williams. He knew Rozich and wanted to collaborate. “Now we’re putting the two technologies together, and it’s really a cool way of re-engineering and rethinking the wastewater spot.”

One example of In-Pipe Technology’s use can be seen in the town of Olds, Alberta, which earned a sustainability award two years in a row through its use of the company’s innovations. Back in 2006, Olds was investigating an upgrade to the wastewater treatment plant.

The wastewater treatment plant needed to be in compliance with values set for biological oxygen demand (the amount of dissolved oxygen needed to break down organic material by aerobic organisms) and total suspended solids, but was not able to meet the limits. This put Olds’ taxpayers at risk of fines. In-Pipe was recommended and came up with an ingenious solution: place twenty-two dosing panels throughout the town’s wastewater system. These were designed to release liquid every few minutes, with a one-liter bottle lasting an entire month.

The added bacteria attacked grease, fats and oils throughout the wastewater system. This resulted in Olds being in compliance with regulations while reducing labor costs for city workers who would otherwise have had to clean grease pits. It also avoided major capital expansion to meet deadlines.

“Since going to using this, and getting our limits down and better treatment, (it is) not only better for other communities downstream from us, but also the aquatic life that’s in the river,” said Scott Chant, manager of utilities and public works. In-Pipe’s sustainable technology allowed Olds to improve effluent quality and lower influent loads, increase capacity, and it saw a twenty-five percent reduction in sludge volumes, with no extra energy consumption.

The company has recently submitted proposals to facilities in France, China and Netanya in Israel. The Netanya proposal outlines a comprehensive strategy for reducing sludge through the installation of In-Pipe Technology, resulting in new revenue streams for the city from valuable byproducts. Through implementing a detailed collection system and wastewater treatment plant program, overall organics treatment performance should increase from current levels by over seventy percent. It will also minimize excess digestate that would require further drying and disposal, and it will lead to the recovery of phosphorous, nitrogen and potassium to be used as a liquid fertilizer.

While municipalities remain the key market for BioConversion Solutions and In-Pipe Technology, other sectors are growing. In the food industry, many plants in China, Singapore, the United Kingdom and other locations are running zero discharge and have done so for over ten years. Additionally, the first generation of the technology has been installed in pharmaceutical and chemical plants to avoid costly incineration of sludge.

“We have done a number of papers on the collection system, whether it’s fats, oils and grease, odor control or load reductions and compliance,” comments Williams. “So there are a number of benefits of converting collections systems into an active part of plants. And the great thing is, now that we have BioConversion Solutions as a partner, we can go into a plant and also convert the plant into a profit center, instead of a cost center.”

The company’s highly scalable technology continues to attract new clients, largely through word of mouth from municipalities and other satisfied clients. Cities such as Sarasota, Florida have used this technology for nearly a decade and successfully reduced sewer overflows by ninety percent, which substantially reduces fats, oils and grease from the system. Other cities, such as Crown Point in Indiana, have also seen sewer overflows reduced by ninety percent. Among the many environmental benefits of decreasing the amount of waste – such as fewer contaminants finding their way to creeks, rivers and streams – is less risk of flooding in homes.

Among its many other objectives is education, says Rozich. “I don’t think people really understand what we’re being faced with. We have an old economy and a new economy. An old economy is: we dig it out of the ground, we use it, and we throw it back in the ground. The new economy is: we take byproduct streams, reprocess, harvest the resource assets out of the stream and reintroduce them back into the economy without them spending a billion years in a landfill.”

Since the need to exchange our throwaway mentality for a recycle and reuse approach is critical, BioConversion Solutions and In-Pipe Technology will continue to lead the way in transforming water for years to come.