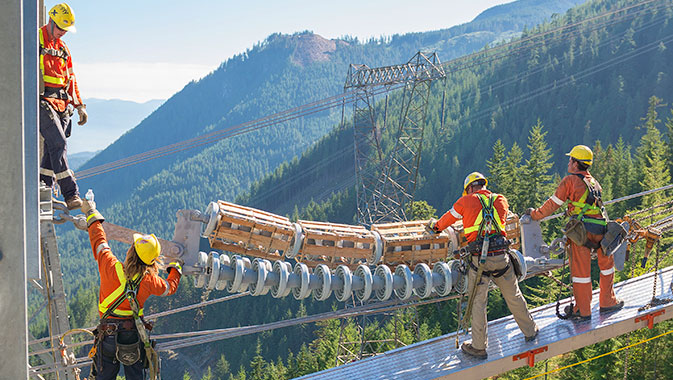 In 1977, Forbes Brothers opened shop as a small, family-run business in Arborfield, Canada. At the time, there was a desperate need for high-voltage power line construction services, and as such, the company quickly expanded throughout Western Canada.
~
Over the last three decades, Forbes Bros. has reached new heights, and today, it is the largest privately-held power line construction group in Canada. The now-international power leader has become widely renowned throughout North America and the world for constructing some of the most complex high-voltage electrical systems the industry has ever seen.

Forbes Bros. is hard to compete against. Its portfolio includes the likes of SaskPower, ATCO, Fortis Alberta, AltaLink, EPCOR, Dow Chemical, Manitoba Hydro and more. Since great success is always the result of great business practice, we were eager to find out what was at the heart of the Canadian leader, and Forbes Bros. Vice President Adnane Rakib and Vice President Telecommunication Services Ben Painter illustrated just that.

Forbes has proved that quality combined with hard work remains the best recipe for success. The company set out with the aim to provide clients the best quality of service, and in doing so found it essential to do as much in-house as possible. Because of this, when it comes to tackling big projects while simultaneously tailoring them to meet unique operational needs, few companies can match Forbes Bros.

Since the 1970s, Forbes Bros. has acquired power line businesses across Alberta and Manitoba, and recently purchased Summit Telecom to expand its existing telecom offerings. As a result of this strategic growth, the company has cultivated unparalleled services that have led to significant savings for clients.

When the company started in the late 1970s, the demand for utilities and power line services was booming, but there were very few Canadian service providers with the skills or technology to respond. Forbes Bros was always a leader in the space, but as new power line challenges began to emerge, Forbes Bros. realized the importance of diversification.

It has both the experience and the innovation in construction techniques to operate in every type of terrain. Forbes Bros has built power lines in some of the most challenging locations in the world, using helicopters for construction and stringing, when necessary. The company has completed power projects above ground, below ground, on natural energy sites and in busy cities; you name it, and Forbes has done it.

With an eye on vertical integration, Forbes Bros. has diversified its existing technology and skill set dramatically in recent years and, according to Mr. Rakib and Mr. Painter, this branching out into other related services has served as a crucial competitive advantage in the global marketplace. “We are able to act as a one-stop shop, a full turn-key operation providing engineering, procurement and construction. Clients only need to engage Forbes to receive preferred services,” said Painter.

Forbes Bros can now offer the total package for power line and energy projects, resulting in cheaper and more efficient execution and generally better quality results than those provided by others in the market. It can provide immediate and complete solutions to even the most complex projects.

Although Forbes has undertaken both diversification and growth in recent years, there is a further evolution in the pipeline, and it plans to expand its services substantially in the upcoming years according to Mr. Rakib. “I see Forbes, in five years, as a multinational company offering wide range of services.”

A significant portion of the company’s work remains heavily concentrated in electrical utilities, but today, the firm serves major projects across power, gas, pipelines and telecommunications sectors. Taking an approach often seen in general construction and engineering, Forbes has adopted a standard practice of formulation to centralize and expedite results. “We take what is complex and make it simple and routine. We find ways to create production line work out of geographically separate and complex work packages.”

Augmented through strategic acquisition, Forbes has built an empire by providing the best service available, leveraging in-house technology and developing a strong knowledge-based company culture. At any time, the company can construct hundreds of kilometres of transmission line in points across the world simultaneously, which is a feat only possible as a result of the firm’s unique staffing structure.

Today, the company employs over twelve hundred professionals around the globe. This truly international team works closely with partner firms in Europe, Australia and North America to ensure that local knowledge and skilled professionals play a key role in each new project. These intercontinental alliances provide a steady stream of working capital for new projects that ensures that as soon as a new contract is won, each project is completed quickly and to the high safety and quality standards of the Forbes Bros. international brand.

This local knowledge and local labour base are key elements of Forbes Bros. success, and as both interviewees explained, it all comes down to how the firm views the importance of staff. “Our leaders in the office or in the field are problem solvers that take an owner’s approach to their work,” Mr. Painter said. “We have an ingrained attitude that makes us continually look for areas of improvement. We have great people here. We tend to build long-term relationship with clients, and this is why they come back to us all the time. “

The firm has remained diligently committed to maintaining the unique business culture of each new acquisition. Unlike other companies, it keeps existing staff and invests heavily in training. As a result, Forbes Bros. has developed highly, experienced and specialized staff, a feat both Rakib and Painter see as one of the company’s biggest achievements overall.

When the market fluctuates, Forbes Brothers stays strong which is why it has grown so much since its creation. Unlike others in the space, the company has remained privately owned, a decision which has proved of the utmost importance for clients.

Since Forbes Bros is privately owned, it has greater autonomy over not only its timelines, but its budgets and, most importantly, its future. “We are a private company with a small leadership team,” Mr. Painter explained. “We are able to make decisions quickly where others may get stuck in internal red tape.”

Moreover, as most other providers operating at this scale are publicly traded, many clients are reassured by knowing their projects will be accomplished without the obstacle of multiple financial stakeholders. “Forbes is privately owned, and owners have more leverage on steering the wheel towards what’s the best for the company and the client. Forbes has maintained excellent return on investment compared to their competitors,” said Mr. Painter.