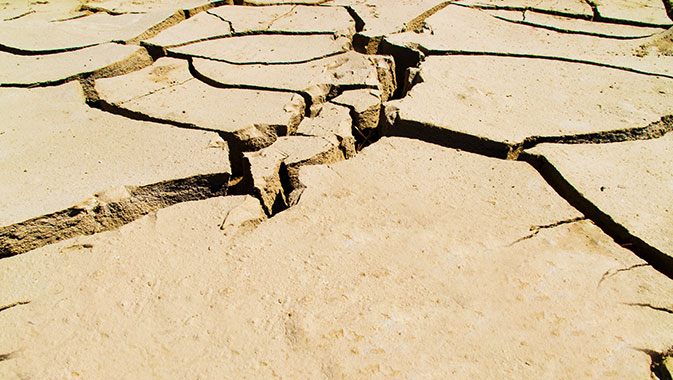 The Golden State is suffering through its fifth year of a crippling dry spell. The Governor of California declared a statewide drought emergency in January 2014. Less than a year later, over 95 percent of California’s agricultural sector was in the midst of severe, extreme, or exceptional drought. A University of California Davis study pegged the state’s drought-related economic loss at $2.7 billion for 2015.
~
In stark contrast to previous years, California’s 2015/2016 rainy season yielded nearly normal levels of precipitation—and yet a significant portion of the state remains locked in severe to exceptional drought conditions. The economic impact is felt throughout the region, but nowhere more keenly than at the thousands of farms that work to put food on America’s table.

Agriculture in California is a critical industry that deeply impacts the state as well as the nation as a whole. As of 2014, California’s 76,400 farms and ranches received approximately $54 billion for their output and the industry generated at least $100 billion in related economic activity, according to the California Department of Food & Agriculture (CDFA). California is the leading US state in cash farm receipts and its combined commodities represent almost 13 percent of the US total.

Dairy is California’s leading commodity in cash receipts, generating a record $9.36 billion for milk production in 2014. The Golden State produces more than 400 different commodities, which are sold throughout the United States as well as to a long list of countries around the world. As of 2014, California’s top ten valued commodities were milk, almonds, grapes, cattle, strawberries, lettuce, walnuts, tomatoes, pistachios, and hay. One-third of America’s vegetables and two-thirds of its fruits and nuts are grown in California.

With drought continuing to threaten the industry, California’s agricultural losses are projected to be between $1 billion and $1.5 billion this year, according to a CoBank Knowledge Exchange study. This is less than last year’s estimated loss of $1.8 billion but, despite the improved statistics, the Golden State’s farms and ranches remain under strain, with water restrictions still in place for yet another growing season.

Due to ongoing water shortages, California farmers are expected to fallow between 300,000 and 350,000 acres this year, significantly fewer than the 540,000 acres fallowed last year, CoBank reports. This year’s cutbacks will most heavily impact field crops including corn, wheat, pasture, cotton, and alfalfa. Fruit trees, vine-grown fruits, and other permanent plantings will suffer less impact; these crops yield the highest return and cannot be fallowed without lasting damage. Cattle and dairy farms feel the effects of the water shortage most keenly when it causes the price of locally grown feed to rise.

Agriculture’s insatiable thirst is affecting areas far beyond the drought stricken regions. The majority of California’s cropland relies on irrigation, much of which comes from large-scale government water projects that store and transport water hundreds of miles. The increased demand for water is taxing these water resources more heavily than in the past. Water from the Colorado River is in particularly high demand and conservationists warn that, even though the drought has not directly impacted the river greatly, the increased strain on the waterway could have long-lasting consequences that negatively affect the tens of millions of people dependent on the river for their primary water source.

Agricultural operations have been able to mitigate much of the water shortage by turning to groundwater. In fact, the state’s agricultural economy managed to grow throughout the drought primarily because California’s generous reserves of groundwater offset around 70 percent of the surface water shortage in 2015, according to the UC Davis study.

Drawing from the state’s groundwater reserves has certainly reduced the severity of the economic impact, but it is also creating its own set of problems. Aquifers are not bottomless—and when they are drained too quickly it can take years for them to replenish. This puts further strain on valuable water resources and increases the cost of water in the future. Groundwater depletion can also lead to costly environmental complications such as land subsidence, also known as sinking, and saline intrusion, the United States Department of Agriculture (USDA) warns.

With much of the nation’s fruit and vegetable production concentrated in the drought-stricken state, the economic impact of California’s water shortage ripples across farmlands and into America’s supermarkets. Retail produce has a much stronger relationship with farm commodity prices than many other foods, the USDA reports. This is one reason why fresh fruit and vegetable Consumer Price Indexes are particularly volatile. Because fresh produce is subject to relatively little advertising, processing, packaging and storage costs, any change in produce production prices are reflected in supermarkets relatively quickly, often in as little as one month.

Even so, drought-related market trends can see significant delay from the initial onset of a water shortage. This is because it takes time for weather conditions and planting decisions to impact crop production. For example, strawberries require two to three months to mature, so increased prices due to lowered supply would not become evident for weeks after planting.

This lag has been seen in previous dry spells. In 2005, after five years of a particular drought, retail fruit prices increased by 3.7 percent and retail vegetable prices rose by 4 percent, the USDA reports. Prices continued to climb in 2006, an entire year after that drought began to let up. No price is set in a bubble, however, and retail produce—like any commodity—is affected by a host of complex, interlocking factors. For instance, the prices for fresh produce dropped in 2009 despite drought conditions. This was largely because the 2007-2009 recession lowered foreign and domestic demand for many retail foods. Recessions, fuel prices, wages, imports, and other phenomena all affect the price of food on grocery store shelves, lessening the impact of commodity price swings.

Drought has become the new normal for California. The agricultural industry will have to take the necessary steps to stay ahead of tough farming conditions, at least for the foreseeable future.

To avoid additional economic loss, the USDA advises that farming operations develop a detailed conservation plan. A written record of management decisions and planned conservation practices, these plans balance business needs with conservation needs and can be developed with the help of USDA’s Natural Resources Conservation Service (NRCS) conservationists. These conservationists will also sit down with farmers to develop irrigation management plans, ensuring that every drop of water goes as far as possible for the greatest environmental and financial benefit.

Soil erosion is another major concern down the road as dry soils crumble into dust and blow away, creating economic and environmental complications. To prevent this, the USDA is working with California’s farmers and ranchers to implement a variety of safeguards including crop covers, surface roughening, residue management, mulching, and switching to crops that require less water.

These agricultural operations can access funding to help them weather the storm and put conservation plans into action. Almost $40 million is available to drought-impacted farmers and ranchers through NRCS.

According to the UC Davis study, the outlook for 2017 and beyond is largely tied to the amount of moisture the state receives as well as the availability of the state’s coveted groundwater. With rain and snowfall an ongoing uncertainty, California’s agricultural industry—and related economic statistics—will likely depend on smart water management for many years to come.