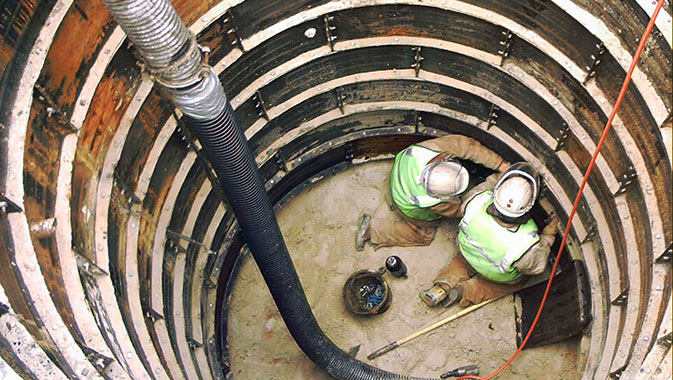 Aaron Enterprises of York, Pennsylvania specializes in ‘trenchless technology’—constructing underground lines and tunnels without cutting a huge open trench on the earth’s surface. This construction firm celebrated its fortieth anniversary in 2016, confident for the future and eager to refine its specialty operations.
~
“We put holes in the ground [for utilities]—sewer, water, gas, electric. Even, at times, pedestrian tunnels or tunnels under buildings,” explains Eric Harlacher, general manager at Aaron. The company has also dug tunnels for communications technology.

Company founder Vincent Rice launched Aaron in 1976, “basically with himself and eventually one or two other people,” says Harlacher. The company name was largely chosen to ensure the first spot in the phonebook, he explains. “Now, that’s back when we had phone books,” he adds with a laugh.

Quite early in the firm’s history, Aaron started putting lines beneath the ground for utility work and became known for its skill in trenchless technology. This technique allows for underground utilities to be installed or replaced without making a mess of the ground surface or the need for excavation according to the Cleveland-based North American Society for Trenchless Technology (NASTT).

On top of that, “in most cases, trenchless techniques will demonstrate significant cost savings benefits for municipalities and utilities over traditional open trench methods,” states the NASTT.

Aaron Enterprises did not invent trenchless technology but it has embraced the process with gusto.

Aaron management has discussed expanding the firm’s range of operations, but nothing concrete has been set. Aaron might expand into new states, “but we’re not sure … it depends on where our customers are. We work with a lot of nationally-based customers. So, if the job fits and we can get together as a team, there’s no telling where we might end up in the United States.”

Aaron’s customer-base is “wide ranging … we’re typically a sub-contractor.” For highway work, the end-customer is often a state agency. For sewers, the end-customer is often a municipal government, he says. In this fashion, Aaron Enterprises has done projects for such entities as the Baltimore County Department of Public Works, the Carroll County Department of Public Works, the mayor/city council of Ocean City, Maryland and the Washington Suburban Sanitary Commission (WSSC).

Often, a general contractor will be hired by a state or municipal agency for a major construction project, “then, they sub us to put in trenchless crossings. We work for pipeline companies including cross country pipeline firms and distribution pipeline companies for oil/gas work. And we also work for electrical companies to put in new lines underground for firms producing electricity for regional grids,” he explains.

Harlacher notes that revenues had been rising steadily prior to the 2008 recession. When that hit, “we took a slight dip” that required a few years from which to rebound, he explains. In recent years, however, revenues have again begun to rise, and Harlacher anticipates that 2016 revenues will be higher than last year.

The company requires a particular kind of employee. “For one, they can’t be claustrophobic. We do a lot of work underground in tunnels. You have to be able to be comfortable being in the ground or underground at all times,” he says.

In addition to not having phobias about working in enclosed spaces beneath the ground, an ideal employee should be able to handle adversity and variation. “The underground work area is always changing … if you work a nine to five job and do the same thing over and over again, that’s not the type of job we have,” explains Harlacher.

Working underground, unforeseen challenges and abrupt revisions in plan are common due to unexpected or changing ground and weather conditions, among other things.

Doing trenchless work is something of a specialty, requiring a skilled labor force. “There’s definitely a long learning curve in trenchless work. Just when you think you have something figured out …” says Harlacher, letting the thought drop for emphasis.

“We take it easy on newer employees. We don’t throw them into the ring. We move them around our shop and our field crews, so they get an understanding of the whole industry. A lot comes down to on-site and on-the-job training.”

Given the nature of what the company does, it’s no surprise that Aaron has a strong safety culture. The firm has a full-time safety manager and tries to integrate safety procedures into everything it does. Safety measures include ongoing training and program development, strict adherence to government rules and regulations and drug and alcohol testing.

Employees aren’t the only ones who require special skills. “Being in the underground industry, there’s only a handful of suppliers and vendors that really do what we do. There’s a select few vendors that we use that are relevant to our industry … [they] provide the equipment and services we need in order to provide our services,” says Harlacher.

Needless to say, Aaron maintains close relations with the select number of suppliers and vendors they do engage.

There are certain projects of which Harlacher is particularly proud. He points to a recent assignment to “jack” or install “a nine-foot-by-nine-foot concrete storm box culvert beneath the Pennsylvania turnpike, in the eastern part of the state.” It was a complex job that was “completed as designed” he notes proudly, with “no deviation in the roadway.” The aim of the project was to better facilitate storm water management.

Aaron has taken on other storm water related jobs, sometimes following natural disasters such as hurricanes that involve heavy amounts of rain. The company has repaired damage to storm water systems, for example.

The future might see Aaron doing more electrical work. “Over the last two years, we’ve got definitely into the electrical industry. Putting in underground electric lines for upgrades of existing grids … as well as being able to get some of the overhead lines underground. We’ve had a handful of jobs where the focus is to put the electrical grid underground and increase the current capacity,” says Harlacher.

Down the road, he anticipates that Aaron will acquire more equipment—“It’s always a continuous thing. There’s always the replacement of existing tooling” and manufacturers who come up with new, improved tools and gear.

Likewise, he’s open to seeing Aaron expand the ranks of its employees, though he doesn’t endorse massive, uncontrolled growth.

At present, Aaron has a website and uses social media to promote its services, but otherwise doesn’t do a lot of aggressive marketing outreach. “A lot of work coming to us is based on word-of-mouth referrals. The mindset is, if you do a good job for your customers, work will find you. That is a premise that our owner instilled in us, that we live by. Giving the customer what they believe they are entitled to get and making sure they are happy is what, at the end of the day, will provide us future opportunities,” he explains.

He is pleased that more construction firms are now offering trenchless technology, compared to the era when Aaron was first launched. Having a greater number of companies involved in the niche moves the whole trenchless sector forward, he explains.

As Aaron enters its fifth decade in existence, the company is determined to improve upon what it already does well. “We’re always refining our current processes, to be able to do more technical, advanced projects … and to be able to take the industry to the next level,” states Harlacher.