A Rural County with an Ambitious Development Plan 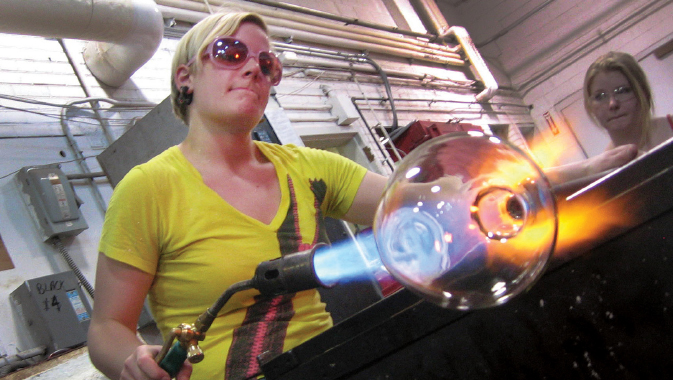 Allegany County has three colleges, a skilled workforce, accessible transportation routes, plenty of outdoor recreational opportunities and big plans for development. The county is situated in southwest New York on the border with Pennsylvania. It is a rural community, based in the foothills of the Allegheny Mountains and consisting of roughly forty towns and villages. The striking landscape features rolling hills, valleys, forest and fields.
~
“We’re a rural county and people don’t realize we have three colleges,” says Craig Clark, vice-president economic development at Alfred State College and executive director of the Allegany County Industrial Development Agency.

The colleges in question are Alfred State, Alfred University and Houghton College. Put together, all three graduate over 1,600 students a year, in a variety of programs from skilled trades to engineering, business, finance and design.

Alfred University houses the Center for Advanced Ceramic Technology (CACT), which works to promote expertise in glass and technical ceramics with applications in healthcare, defense, the energy sector and more. Graduates and faculty are known worldwide in advanced materials and work with Corning Inc and other world-leading materials-related industries.

Houghton College, meanwhile, is a Christian liberal arts college that includes a number of STEM career paths and recently added data science. “Allegany County has 48,000 people, and almost 7,000 college students are here annually. If you look at the college student number, that’s pretty significant to support various industries in the county and the region.”

The Incubator in Alfred is another great asset that has focused on ceramic and glass startups in the past and is broadening its support to all industries. Saxon Glass, located in the incubator, provides chemical strengthening services for primarily pharmaceutical glass containers under the registered trademark Ionex®. The flagship product is the strengthened glass cartridge containing epinephrine. Other materials and ceramic-related operations have also started in Alfred, including Belvac Production Machinery that recently opened in the Sugar Hill Industrial Park.

The town of Wellsville features a branch of the global Arvos Group, which specializes in the manufacture of thermal processing equipment and large-scale air preheaters for power plants. A branch of Dresser-Rand, part of Siemens Power and Gas is located in Wellsville and manufactures steam turbines, with corporate headquarters located in Olean, NY. Dresser-Rand makes high-speed rotating equipment for the oil/gas, petrochemical and process industries.

According to U.S. Census information, there are roughly eight hundred businesses in the county, the majority of which (over six hundred) are small, with less than ten employees.

While there is cropland in Allegany County, agriculture centers more on livestock, grazing/pasture including dairy, and field crops than vegetable production. Allegany County is #1 in the state regarding swine sales at $9 million. There are several dairy-based production industries in the area including Saputo (Friendship Dairies) and Empire Cheese.

“We have economic development opportunities in the county. Agriculture, manufacturing and education are our big areas – our core businesses we’re building on and will develop,” says Clark.

To this end, a county-wide steering committee with representatives of Allegany County government, academia, business and industry put together a blueprint for future economic growth. The aim was to focus on ways to retain and expand existing employers and attract new companies to the county. The Allegany County Development Vision Statement that followed outlines several strategies and objectives to achieve these ends.

The recently released goals and strategy plan suggest creating a county-wide marketing campaign that focuses on strengths in agriculture, education and manufacturing. The document has the county revamping its website, creating a marketing and communications plan and setting economic benchmarks to measure success in boosting business. Also cited are plans to attract outside investment and for county leaders to work in a collaborative fashion.

Allegany County’s easy access to major transportation routes is an appealing feature for potential businesses. “We’re right along Interstate 86, which goes all the way to New York City. There’s also rail transportation. We’re about an hour or so from major airports,” explains Clark.

Wellsville Municipal Airport offers a 5,000-foot-plus runway that can handle corporate jets. There is a world-class manufacturing facility located at the airport and there are plans to expand businesses at the airport. Bigger airports can be found in nearby Rochester, Buffalo and Elmira-Corning. A freight rail line run by Western New York and Pennsylvania Railroad goes through the county as well as a line operated by Norfolk-Southern Railroad.

Much of the early industrial development in the county revolved around the oil and gas industry. The county was, in fact, the site of the first recorded oil discovery in the continent. This discovery took place in 1627 when Indians from the Seneca Tribe led a French missionary to an oil spring in what is now Cuba, a town in Allegany County.

The county enjoyed an oil boom in the late 1800s, producing over six million barrels of oil a year at one point. This tapered off to less than one million barrels by the 1920s. New technology saw oil production in Allegany County rise to four million barrels a year by the 1940s. However, in recent decades, oil production in the county has been in decline. Otis Eastern, located in Wellsville, continues this tradition and is a constructor of gathering systems for producers in the Appalachian Region as well as pipelines for midstream and transmission companies throughout the Northeast. Allegany County features a northern climate but doesn’t get the kind of tremendous snowfall some communities closer to the Great Lakes receive. Winters are not as severe as they are in other parts of the northeastern United States, says Clark. Summers are generally warm.

Major community events in Allegany County include a garlic festival, trout derby, artisans tour and hot air balloon rally. The county holds a RidgeWalk & Run event in the fall, in which participants either run or walk on trails in the area. Clark says that autumn “is a great time to be in the local hills with the fall foliage.”

One of the more intriguing regional tourist attractions is the Bare-Knuckle Boxing Hall of Fame, in Belfast. The hall is based in the barns where celebrated bare-knuckle boxer John L. Sullivan trained for the last worldwide bare-knuckle championships, held in Mississippi in 1889.

Allegany County was recently a featured stop in the Fireball Run, an event in which some forty teams compete in a cross-country trivia game, visiting little-known locales and seeking out historic artifacts. As organized by a Florida group, the Fireball Run is covered on TV and the Internet.

As mentioned, the Allegany County economic development blueprint has the county revamping the county website to improve its promotional potential. This updated website will allow local officials to better promote the area through digital marketing, social media and conferences.

The county has participated in SelectUSA trade summits in Washington DC in which companies and communities seek information and leads on foreign investment. SelectUSA is an initiative of the Department of Commerce. SelectUSA summits have featured appearances by the likes of President Obama. Plans are afoot by Allegany County officials to attend other trade shows in the future.

Clark says Allegany County is “a very safe community with great public education, some of the best public education in the state. There’s a real sense of community and access to higher education and careers in manufacturing and associated businesses. There are a number of outdoor activities: water sports, skiing, fishing, hunting, golf. The three colleges have evening speakers and a number of cultural events. Houghton is well known for [musical performances] including the Christmas Prism, held each year.”

Other outdoor recreational activities include canoeing, mountain biking, hiking and horseback riding. There are several golf courses and ski resorts in the area, and hunting, especially for deer, is hugely popular with many residents from throughout the region visiting the county.

“Because we’re very rural, land has been reasonably priced here, and still is. People come down [from big cities] and buy land, set up small hunting and fishing camps,” says Clark. Indeed, the county’s cost of living is very low. The median value for a house or condo in 2013 was $67,040.

“[Low housing prices are] one thing people are kind of shocked at when they move into the community. There are [more expensive] homes, but in this area, a $200,000 house is a very high-end house,” states Clark.

According to the Allegany County website, the cost of living in the area is about five percent less than the national average.

Clark says Allegany County officials plan to build on the county’s strengths but also encourage a diversified economy. Another goal is to convince past alumni from the three colleges to return to Allegany County to set up businesses and build families.

“We want to get the word out that we’re a great place not only to live but to operate a company, because of skilled workforce and colleges,” says Clark. The proximity to the educational institutes provides ready access to high quality skilled resources, student interns, specialized equipment and other support. Start UP NY and other economic development support systems exist through Empire State Development that assure the county can and will support economic growth.