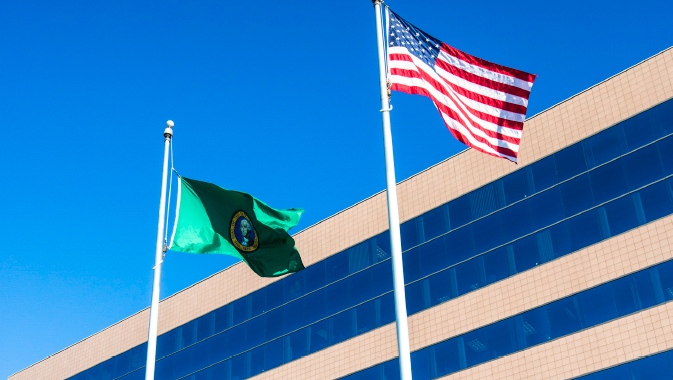 Located just eleven miles southeast of Seattle, in the heart of the Greater Seattle and Puget Sound region, the City of Renton has a legacy of many recognized and highly respected businesses. Renton has emerged from its early economy that was founded on timber, clay production and coal mining, to become the home of numerous service-based businesses, technology companies, manufacturers, banking entities and sports franchises. Renton is widely known for fostering a pro-business environment for companies of any size.
~
The City of Renton is well-known for its great quality of life, so it is no wonder why the city continues to grow and prosper. It has much to offer: a scenic location, low cost of business and connections to seaports, highways and the Seattle-Tacoma International Airport as well as hundreds of acres of parks, the striking beauty of Mt. Rainier, quality schools and more.

In just over a decade, Renton’s population has boomed, from 57,234 to over 103,000. The eighty-two percent growth has made Renton one of the ten most-populated cities in Washington State and the fourth-largest city in King County.

Within this 24.03-square-mile urban community, there are many of the amenities found in much larger urban centers, but at considerably less cost. The city is just a sixteen-minute drive to downtown Seattle and Bellevue. Renton is along three interstate freeways and four state highways and a three-hour drive from other hubs, including Portland, Oregon and Vancouver, British Columbia.

It also has reasonably priced housing through the revitalization of existing neighborhoods and the creation of new ones to welcome future residents. These features and many others have made Renton attractive to businesses that are setting up, expanding, or relocating.

Although the area has gained considerable attention from businesses in recent years, one project, in particular, will forever change the landscape of Renton.

“Currently, the site getting the most excitement is Southport,” says Vicky Baxter, chief executive officer of the Renton Chamber of Commerce since late 2014. Baxter and her team are responsible for improving business and economic conditions in Renton through advocacy and by providing resources, leadership development and networking opportunities which benefit not only business but the general welfare of the entire Renton community.

The Southport project has been years in the making. About eight hundred workers are currently busy on a massive, $590 million project in South King County. The seventeen-acre property just off Interstate 405 represents one of the most significant real estate projects in the area.

The $590 million project is being financed by Seco Development, with funds from Chinese investors through the United States government’s EB-5 immigrant investor program. Seco has an emphasis on superior design and construction for every community it creates, and this is no exception.

Southport has been described as ‘the biggest thing to happen in Renton since Boeing came to town to build bombers in World War II,’ by the Puget Sound Business Journal. It is scheduled to open on July 1, 2017, and, once completed, the site will boast a twelve-storey, 347-room Hyatt Regency and three office towers. It is expected the site will serve as a base to six thousand workers and residents.

Just next to the new Southport site development is the site of Boeing, which has twelve thousand employees. The aerospace giant played an integral role in the development of Renton, having had a presence since the Second World War when the B-29 Superfortress was being made. At one time, approximately forty percent of commercial aircraft were assembled in the city.

Many esteemed businesses have successfully operated in Renton for decades. Paccar is a global leader in the design and manufacture of premium trucks, such as the Kenworth, since 1905.Paccar recently produced its one millionth vehicle.

Other sizable employers include the Valley Medical Center, the Renton School District No. 403, Group Health, GEICO, Providence Health and Services and Wizards of the Coast.

Renton has made itself right for business through numerous forward-thinking initiatives and incentives. Realizing that time is money, the city has expanded its online-based services, including permitting through mybuildingpermit.com, a service of the regional eCityGov Alliance.

The system is available for mechanical, plumbing and low-voltage electrical permits at present and has many advantages over old-fashioned paper methods, as it allows for applications and final permits to be received in just minutes online. Additionally, the city has made efforts to reduce approval time for other permits to speed-up developments, and it is working on a system which will include comprehensive online services such as business licenses, service requests, code enforcements and much more.

By creating an open data portal at data.rentonwa.gov, the city is enhancing the ability of residents and businesses to access valuable data on everything from zoning to licensing, city financing and budgeting.

The City of Renton has a great deal to offer new and established companies alike. It is considerably more affordable than other centers and works to develop an environment conducive to business growth and retention. Mayor Denis Law and members of the city council Commerce strive to create a community that supports business and public-private partnerships.

The city’s efforts are paying off, as companies large and small continue to make Renton a place to call home or to relocate to, as in the case of Providence Health & Services, which moved some its offices from Seattle and today has over 1,600 staff in Renton.

With the city’s strategic economic development efforts and regulatory reforms being upheld as a model across the State, Renton looks forward to several projects. These range from three new hotels, totaling approximately almost six hundred rooms, for the Lake Washington Boulevard corridor; a 169,000-square-foot parts distribution center for Paccar; an administration building for the Group Health Cooperative and a massive 399,000-square-foot store for IKEA.

The new IKEA location is set to open this spring and is home to the largest solar project in Washington. The enormous, 1.27-megawatt renewable energy project measures 244,000 square feet and is comprised of 3,250 solar panels and 4,770 ballast trays used to hold the panels in place. The clean, green energy project will provide electricity for 131 homes annually while reducing the level of carbon dioxide that would otherwise have gone into the atmosphere by 886 tons.

This represents the forty-fifth solar panel project for the Swedish-based company and is the largest installation to date for A&R Solar, one of the leading solar and battery storage installers in the Pacific Northwest.

Through numerous initiatives, including the Renton Downtown Partnership (RDP), the city is working to “cultivate a vibrant, social, cultural and economic center by bringing together the community, non-profits, and city center stakeholders while celebrating the unique historic character of downtown Renton.”

Renton is focused on serving and meeting the needs of all businesses. Through its Renton Downtown Partnership, the city aims to revitalize the downtown core and build upon its mission: “to cultivate a robust economy and culturally diverse experience in downtown Renton.”

The partnership is based on the national ‘Main Street’ model and represents yet another initiative for the city as it looks towards the future.