Over Two Hundred Years at the Heart of American Industry 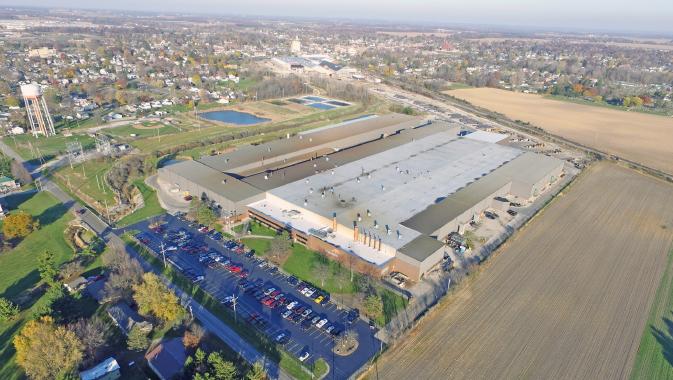 Richland County was named after the fertile land settlers found there just a few years before it was first incorporated in 1808. By the middle of the twentieth century, the area was at the center of the American manufacturing belt, which has deteriorated in the last few decades…
~
The Richland Community Development Group (RCDG) was formed in 2009 to move the county forward from the declining pace of some of its industries into a brave new world of innovation. I spoke with the Director of Economic Development Barrett Thomas from the group’s headquarters to find out more.

“Richland County used to be a manufacturing hub,” he explains. “It was pretty impressive and it peaked probably in the 50s; this used to be the place to be.” Formerly home to a Westinghouse dishwasher factory and a GM stamping plant that employed two thousand workers, Richland County enjoyed a top spot in the heart of the manufacturing Midwest.

“All of those companies are gone; we had a lot of original equipment manufacturing (OEM) and now we have a lot of tier one and tier two suppliers. Our OEM background has given us a strong manufacturing, maker, and doer culture. We had some really successful entrepreneurs but then the focus shifted to maintaining those companies and we lost some of that entrepreneurial edge, which is now coming back,” says Thomas.

In a country whose slogan is “the business of America is business,” Richland County stands out as being a great place to locate for its affordable housing, low taxes and streamlined business regulation. We have abundant water too, a system that’s probably at half of its total capacity. So when we do siting projects we have millions of gallons of water available to industry per day.”

In Ohio, Columbus, Cleveland and Cincinnati are the major metropolises but Richland County is working on building its amenities as well. “We are becoming more of a destination place,” Thomas shares. “This is a great place to live, work and raise a family.

Highways I-71 and US-30 run right through Richland County, giving residents and businesses road access to the 60 percent of the US population that lives within 500 miles. Richland County also has rail access, is close to ports in Cleveland and Toledo and features an airport with a 9000-foot runway. “We are in a great place logistically.”

Mansfield Lahm Regional Airport includes a National Guard base on it as well, and although it was scheduled for closing, “we ended up maintaining and expanding it to include the Red Horse Division, which is the civil engineering group, so now we have two bases. That was a $42 million project with 50 full time and 400 part time people working in five different units. That was a pretty great win.”

Some 1,200 acres of industrial parks surround the airport with over 90 businesses operating out of them. “We’ve got a maker space group that meets and tours these kinds of businesses which help churn out new ideas and promote our entrepreneurial culture.”

The industrial park in Mansfield now has many successful businesses operating out of it. For example, in 2000, Ohio Valley Manufacturing opened its doors and now employs 100 people, with shifts running 24/7 and is still growing. “Also in the same park is Newman Technologies, which is a Japanese Tier 1 auto parts supplier and they have now 840,000 square feet. They’ve just added a $13 million new addition; they’ve done three expansions in the last decade.”

Another recent success story is Next Generation Films in Lexington, Ohio, which makes food and beverage plastic film coverings some with as many as nine layers. They have 180,000 square feet in space, employ 300 people, and are continuing to grow with another 80,000 square foot addition currently in development.

Finding the right people that the local economies require is a major focus of the Richland Community Development Group. “My co-worker, Karen Seamen, does nothing but workplace development,” says Thomas. “We’ve also got a partner that covers this region of the state, TeamNEO, which has 18 counties. For large projects they’re going out and marketing those open positions, sourcing them, screening candidates, and then doing customized training so that new businesses that are locating here will have the workers they need.”

In a county as focused on manufacturing as Richland, automation has displaced a number of workers. The loss of the GM stamping plant is the biggest example. “None of these businesses hire 2,000 people anymore. They’re hiring people that are programming the machines, managing them so that nothing goes wrong, and then reprogramming them for the next process. Each person is looking after two or three machines and that’s what new positions look like,” says Thomas.

“We’ve had a population outflow and we are now at the point where our unemployment rate is getting low and we don’t seem to have a lot of workers sitting around with nothing to do; the macroeconomic forces have taken care of that.”

Despite the recession of 2008 hitting Richland County particularly hard, things have turned around dramatically recently. “We have quite a few expansion projects right now and this is my first year in this role, but Tim Bowersock doing economic development for the City of Mansfield for the past 18 years says, ‘this is the busiest I’ve been in a decade.’”

Mr. Thomas is a member of the International Economic Development Council where he is nearly fully certified. He is also a member of the Ohio Economic Development Association. “They are starting their own designation program where you connect with people who have done this for 20 years,” he explains. “They have a cadre of people they can introduce you to where you can say, ‘I have a problem like this,’ and they can help you out and say, ‘I saw someone in Columbus with a problem like that.’ So I’ve been doing lots of training to get up to speed with best practices and how things are changing. There’s always stuff happening in the legislature and I keep on top of that as well.”

One of the things that makes Richland Community Development Group special is the integration of community with economic development. When the RCDG started in 2009, they decided they wanted to bring the two complementary spheres together. “I work with community and economic development together which gives me greater flexibility to move some of the bigger projects forward,” says Thomas.

The Internet and social media are high on the long list of tasks he is focusing on as his team brings Richland County into the future. “That was the first thing that I wanted to change. We need a new website that will have the data and demographic information that you need to have for economic development. Social media is on the list and that will probably happen six months after the website has been upgraded.”

One of the innovations RCDG has brought to the table is the forming of “action groups” that bring diverse stakeholders together to work on finding the right priorities across 20 economic sectors. “We have some long range planning groups that came out of a much more formalized study of things this community needs to do to move forward. Anyone who wants to attend the meetings can; we have state legislators actively involved as well. They are moving these programs forward bit by bit. Many people didn’t think they would work nearly as well as they have.”

One of the priorities is re-investing in infrastructure by repurposing blighted properties and vacant lots. “So that we don’t get more sprawl, we want to use what we already have. We have a land bank that does that and they are very successful.”

A lot of the manufacturing that goes on in Richland County produces commodity products. They do it as well or better than anyone in the world but developing more value-added products will produce better quality jobs. “I’d like to see Original Equipment Manufacturing (OEMs) make products here again,” says Thomas. “Companies that make the end products and not just components of those products and that get us back in the end user game talking to customers and getting involved in the research and development.”

However, many companies are already doing research and development and that is the key to future economic growth. “I worked in our technology business incubator for seven years before coming here and the types of entrepreneurs that we have here and the infrastructure we have here is pretty strong. But those companies take a long time to grow to turn into major operations. That’s what I’d like to see more of in the next ten or twenty years.”

As another great Ohioan, Thomas Edison, famously noted, “Necessity is the mother of invention.” During the boom times there were plenty of jobs but far less incentive to innovate,” says Thomas. “That whole climate has changed and now we emphasize innovation and entrepreneurship.”