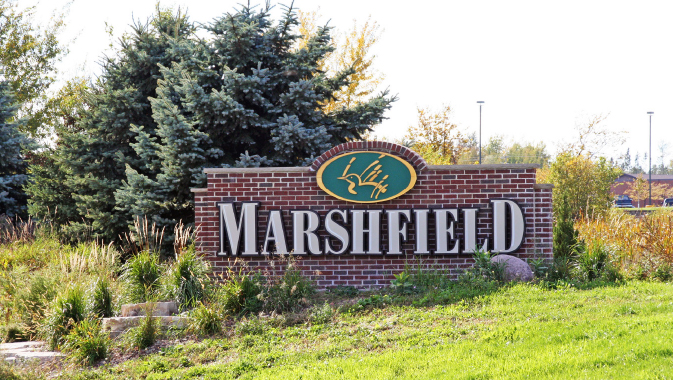 Like many communities in the rural parts of the Midwest, Marshfield, Wisconsin is well-known for agriculture, particularly dairy. Marshfield boosters, however, make it clear that their region has a lot more to offer than just agricultural products.
~
“We would like to make people aware of the opportunities that are available here in the Marshfield area. This is not just a small rural community only involved in natural resources and farming. There is so much more going on in this area,” says Scott Larson, Executive Director of the Marshfield Area Chamber of Commerce & Industry.

Marshfield boasts a medical facility called the Marshfield Clinic that is performing world-class medical research. It is also home to a “cutting-edge DNA banking and DNA testing” company, states Larson.

There are transportation hubs here. The city is in the center of Wisconsin near several major transportation routes including the US HWY 10 4-lane connecting to I-39 just 30 minutes east. The Marshfield Municipal Airport features a 5,200-foot concrete runway, while a regional air hub, the Central Wisconsin Airport (CWA) is only thirty-five miles away. The area is well-serviced by over a dozen motor freight carriers that can truck products to the cities of Minneapolis-St. Paul, Chicago and beyond! Marshfield is roughly one hundred miles from port facilities at La Crosse, Wisconsin via the Mississippi River and 133 miles from Green Bay, Wisconsin on Lake Michigan.

The main industries in the area are healthcare, advanced manufacturing, agriculture, the bio-tech sector (including DNA testing and banking) and transportation/logistics. According to the Marshfield Area Chamber of Commerce, the Marshfield Clinic is the top employer in town, with 6,800 workers.

Established one hundred years ago, the Marshfield Clinic is now “one of the largest medical providers in the state of Wisconsin,” says Larson. The clinic features over seven hundred physicians and has more than fifty regional centers across the state, in addition to the Marshfield campus. The Marshfield Clinic Research Foundation does extensive health-related studies.

Other big employers include Roehl Transport with 2,420 workers, according to chamber of commerce data, Ministry St. Joseph’s Hospital (1,613 workers), Masonite (manufacturer of wood doors with 577 workers) and Felker Brothers Corp. (a steel fabricator with 197 workers). A bio-tech business called PreventionGenetics that offers DNA testing and banking all over the world currently employs 124 people.

When asked if Marshfield officials are looking to increase any particular industrial sector, Larson says no. The chamber of commerce is focused on all of them. “They all have great growth potential, from the major expansion opportunity with bio-tech, to advanced manufacturing and medical. They continue to grow. Each will continue to expand naturally as long as we as a region and a city continue to grow. Dairy will continue to be important. Increased dairy production is a key component because agriculture is such a major industry sector.”

As for the latter, he adds, “We are significant dairy producers. Not just farms, but actual dairies and distributors of equipment and supplies for dairy and food processing, along with farm equipment manufacturing complete the strong ag focus of Marshfield. Milk and cheese production is quite extensive in this area.”

Some Marshfield businesses blend the region’s traditional focus on agriculture with the new focus on high-tech and science. The National Farm Medicine Center, which specializes in occupational health for farming patients, is a prime example of this mix. The center is part of the Marshfield Clinic Research Foundation.

While the area is “always looking to attract new business, our biggest goal is growing what we have,” states Larson. So, when it comes to new business, “we’re trying to attract industries that are a good fit for the characteristics we have in the area,” he adds. This includes companies in the high-tech bio-sector, sciences and manufacturing fields.

The advantages of such locales are obvious. “They’re fully developed parks with infrastructure available to them. As municipal parks, there are development incentives available and appropriate zoning for your business, so you don’t have to jump through a lot of regulatory hoops to get a location for your particular type of operation. Utilities are readily available. We have some of the lowest utility rates in the state. And there’s fairly easy access to major transportation thoroughfares,” says Larson.

As for a low cost of living, the Marshfield Chamber of Commerce pegs the 2015 median sale price of a home in the city at $145,235.

The chamber of commerce currently offers professional development (PD) programs and training for local employees. These include programs with titles such as Building Blocks to Success and Java Jump Start. “All of these special programs are targeted at PD and incumbent worker training skills development,” explains Larson.

Marshfield can trace its roots back to the mid-1800s. The town was named in honor of John J. Marsh, one of the first property owners in the area. Initially, the region was primarily known for logging and milling. Agricultural development soon followed. The Wisconsin Central Railroad opened operations nearby in 1872 leading to “a significant amount of rail traffic,” says Larson. A post-office was set up that same year and Marshfield’s first school launched in 1873. A prominent early Marshfield resident was William Upham, who later served as governor of Wisconsin. By 1880, Marshfield’s population was around 670 people. By 1900, it topped 5,000.

One of the most significant developments in Marshfield’s history occurred a little over a century ago, “when six doctors got off a train and opened a practice here,” says Larson. In 1916, that practice was incorporated as the Marshfield Clinic, he continues.

In addition to being a good place to run a business, the Marshfield area boasts impressive recreational prospects and community events. The city has an extensive trail system for biking and walking, and “ample opportunities to snowmobile, ski, trail ride, hunt and fish,” states Larson.

Big community events include Maple Fall Fest, which just concluded. Held over one weekend in September, Maple Fall Fest features craft vendors, food and entertainment and attracts thousands of visitors. Spring is marked by Dairyfest, a festival held in honor of all things dairy-related and the largest community event in Marshfield.

Dairyfest “commemorates June being dairy month in Wisconsin and recognizes the importance of the dairy industry here in Wisconsin and Marshfield,” explains Larson. Events include a kick-off breakfast, parade, arts and crafts, vendors and entertainment. The community has been hosting the festival for over three decades.

In addition to such family-friendly fare, Marshfield gives potential residents “the opportunity to live in a very safe, cost-effective community with a lot to offer including great career opportunities. For a small community, we have many cultural and recreational opportunities. We have excellent school systems; our public school system ranks as one of the highest in the nation, and we have [well-respected] private schools … we have a technical school campus in the community as well as a UW college campus,” says Larson. The post-secondary schools to which Larson refers are Mid-State Technical College and a branch of the University of Wisconsin.

Looking down the road, Larson says it would “probably be nice” if the city of Marshfield grew to maybe 30,000 people. Even if this goal is not achieved, he points out that “over 10,000 people a day” come into the community to work or visit the local medical facilities.

To promote Marshfield, the Marshfield Area Chamber of Commerce & Industry takes part in trade shows and has a presence on social media. The chamber also works closely with local businesses, the City of Marshfield along with regional and county economic development groups to grow the region.

Larson again stresses that Marshfield is so much more than just a quaint farming community. In particular, the community is eager to expand its healthcare reach.

Healthcare “is our largest employer, so we would like to see that flourish. Healthcare’s success is tied to other industries’ success. If our other industries aren’t successful and can’t continue to add employees paying premiums, then our medical providers suffer,” he states.

Needless to say, no one wants to see that happen. “We want to see our area continue to progress. We’re a steady growth community. In particular, we’d like to see our existing industries continue to grow and invest in the community,” states Larson.