A Family Firm Lives Up to Its Name 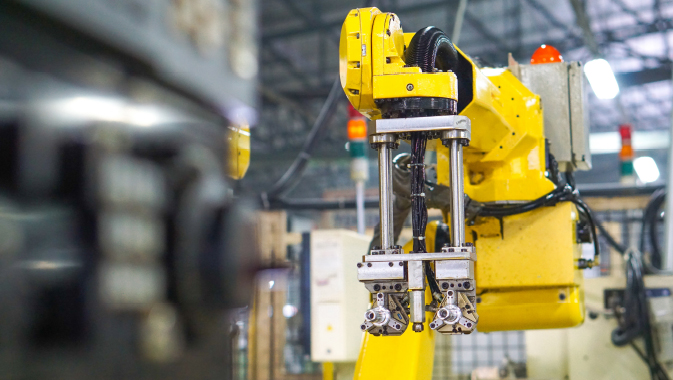 Manufacturers looking to increase efficiency and quality and maybe save on labor costs should consider getting in touch with Creative Automation, Inc., based in Whitmore Lake, Michigan. Creative Automation designs, assembles and programs customized automation solutions, primarily for the manufacturing sector.
~
“What we specialize in is machine tool tending … handling anything from very small parts to larger parts, loading them in and out of a machine tool and transferring them from one machine tool operation to another … We do some dispensing [systems] that basically dispense chemicals or glues or other materials. We also do vision systems that can be used for a variety of purposes – inspection, error proofing, robotic guidance and the like,” says Gerd Walter, vice-president of operations.

Automotive companies – both original equipment manufacturers (OEMS) and suppliers – make up about seventy to eighty percent of Creative Automation’s business, says Walter. “They are huge consumers of automation.”

The company’s systems are designed to pick, inspect, move or dispense parts, products and materials. The company’s solutions have also been used by companies making trucks, engines, commercial appliances and industrial parts. Although it has also developed packaging solutions, manufacturing is the company’s mainstay.

“We’ve got one guy making small widgets that go inside just about every gasoline pump in the country when you pump your gas,” says Walter.

While many of the company’s clients are Fortune 500 businesses with a global reach, most of Creative’s work is done at home. “Our primary field of operations is North America. The NAFTA environment,” says Walter.

The company’s headquarters and 50,000-square-foot manufacturing facility in Michigan are strategically located near the Detroit-area auto industry. Creative Automation also has a sales and service branch in Mexico and sales representation in China. These foreign outposts mainly serve to feed customer orders back to Whitmore Lake where all the design-build work is done.

It remains a family-run outfit. Walter estimates the company currently has around sixty to sixty-five employees, counting contractors. Last year at this time, the number of personnel was closer to fifty.

Growth has been the result of several factors, including a strong economy, global competitiveness, a desire by manufacturers to cut labor costs and a shortage of skilled workers. Consistent quality, as exemplified by the manufacturing mantra ‘zero defects,’ is another motivation. Companies “want the same results, every time,” notes Walter.

The automation solutions can involve robots, conveyors, deburring systems, palletizers, dispensing units and other equipment. Lately, Creative Automation has been adding machine vision to the mix. Machine vision systems can read bar codes and other data, check products and parts for errors and defects or guide robots. Machine vision is a growing trend that “nearly all our customer segments are starting to get into,” reports Walter.

The latest frontier in machine vision involves 3D vision, which allows for much more detailed scrutiny of parts and products. With another firm, Creative has developed a prototype system that uses 3D vision for bin picking purposes. Some of the technology in this prototype comes from robotics giant Fanuc.

“We’re using a lot of their base technology, adding on some layers and putting it into one combined package,” says Walter. It is the kind of task at which the company’s twenty-two member engineering department excels.

“We do the design work in-house. We’ve got mechanical and electrical and controls engineers as well as programmers in the engineering group. We do installations as well,” states Walter.

Installations involve more than just simply putting equipment in place. Company technicians have to make sure the control systems in Creative’s automated solutions are working properly and are synchronized with whatever industrial controls the client has in the plant. Many manufacturers want tracking capability, so “they know this part was done in this machine at this time. If something’s off, they can go back to that machine and start fixing or adjusting things,” says Walter.

With a few exceptions, Creative Automation does not manufacture its own equipment, although the firm is “starting to work on making our own systems,” he states.

The majority of robots it uses are built by Fanuc. It also works with robots from Kuka, Denso, ABB and other robotics manufacturers and products and technology from Rockwell Automation, Allen-Bradley Controls and Siemens controls. Often a company will specify what robotics they want. However, the big automotive OEMs usually acquire the desired robots and ship them to Creative to integrate into a system.

The company has ISO 9001:2008 certification and is a Robotic Industries Association (RIA) certified integrator. The firm follows the ANSI/RIA R15.06-2012 standard for safety. This standard requires that Creative Automation conduct risk assessments for given projects. If it is asked to build a robotic work cell, for example, company engineers identify various risks involving in running the system and suggest safety measures such as protective fencing. The company also proposes safety protocols for system maintenance.

The company is currently experimenting with 3D printing, also known as additive manufacturing. The firm has used 3D printing technology for prototyping.

“We can print out a couple sample parts, modify them as we need. Once we’re sure everything is working correctly, we can get the expensive version made,” says Walter.

“We’re always doing interesting projects,” states Walter, who mentions a noteworthy project Creative did for a large diesel engine manufacturer in the United States that was making a line of air filtration products.

The company’s production process involved multiple parts including everything from air filters for tractor diesel engines to air filters for diesel engines in giant mining vehicles. It had to come up with a production solution that was “fairly automated, with minimal changeover,” recalls Walter. All went well and the system Creative designed is now “up and running and working good,” he adds.

Now that Creative Automation is in expansion mode, the company has had to focus on its hiring process. Prerequisites for new employees “depend on the position, but generally we’re looking for people with relevant skills, unless we’re going for a strict newbie … [We want new hires who have] a good attitude and look like they have a reasonable work ethic. Of course, we also try to make sure they’re a good fit culturally. I don’t want to bring somebody on and they don’t mesh with everybody else. That’s counterproductive,” says Walter.

The family-owned nature of Creative Automation extends into the company’s corporate culture, says Walter. “We’re a little slow to hire but we’re also slow to fire. We try to be reasonable and flexible with our employees, but we’ve got our expectations. We try to make sure they understand that, but within those bounds we try to be as accommodating as we can and provide a good work environment.”

“Finding talent and then trying to keep cost competitive,” is what Walter cites as the company’s biggest challenge. “It’s always a balance.”

“I think we definitely have a ‘get it done’ attitude and want to take care of the customer. We’re still a relatively small organization, so a lot of people have to wear many hats. We also have a general open door policy, you know anybody can come talk to me or the boss … Sometimes I’ll go out, pick the guy on the shop floor’s brain because sometimes they’ve got good ideas. It doesn’t matter to me they’ve just been working on the shop floor twenty years and don’t have a college education.”

Creative Automation had a booth at the International Manufacturing Technology Show (IMTS) 2016 in Chicago. The company also has a website and videos on YouTube, but generally relies on more traditional means to promote itself.

“We do a lot of word of mouth. We get enough quote requests that our sales department can barely keep up. We’ve got a small social media presence as well but the big two are really word of mouth and some trade shows. We also get a lot of repeat business,” says Walter.

“We are looking to obviously grow … We’re also looking to have a few more standardized products. We continue to push into some new industries … I think machine vision is a growing field, so that’s an area we’re paying a lot of attention to. Another area we’re looking to expand is our service and support capability. We’ve recently added a service engineer in Mexico because we do a lot of business down there. We do a fair amount of business in Canada as well, and we’re growing into other areas in the U.S. We see a lot of opportunity in general industry, and aerospace is definitely another area for attention.”