An Educational and Economic Hub in the Everglades 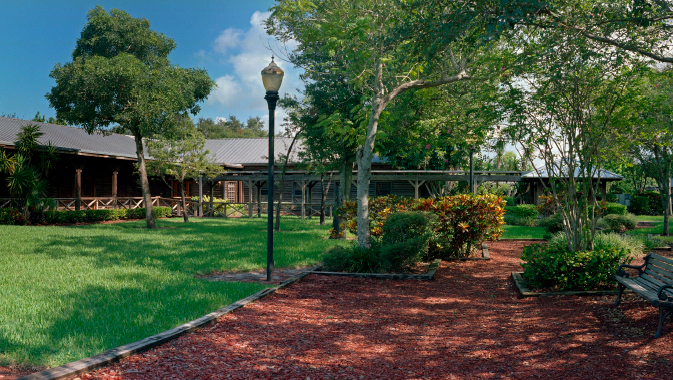 Davie is a thriving community based in what was, just a little over a century ago, unsettled Florida wilderness. Currently enjoying a major growth spurt, the town’s highly educated residents live in a region abounding in quality post-secondary schools and a breadth of economic development activity.
~
Located in Broward County, the Town of Davie, Florida has “a small town feeling” and an appealing blend of rural and urban traits, says Assistant Town Administrator Phillip R. Holste. While Davie originated as an agricultural community and still boasts ample green space, it is also home to the South Florida Education Center. The Center represents five colleges and universities in the Davie-area—Florida Atlantic University, McFatter Technical College, Nova Southeastern University, the University of Florida, and Broward College.

Indeed, Davie is working with Nova Southeastern University to set up a sizable “academical village” centered on a new hospital. The Town, in conjunction with its Community Redevelopment Agency (Davie CRA), also has big plans to develop space for offices, residences and commercial outlets, and to revitalize its downtown.

Holste cites a list of reasons why a business would want to set up or expand in Davie. The Town is strategically located with a well-educated workforce (30 percent of the population has a Bachelor’s Degree) and a high standard of living. “We have the type of employees that employers are looking for but we also have a solid consumer base where people have buying power to purchase products and services that are produced,” he says.

According to information from city-data.com, the 2015 estimated median household income in Davie was $60,959, compared to $49,426 for the state of Florida as a whole. As for transportation, major highways such as Reagan Turnpike and Interstates 75 and 595 run through Davie. The Fort Lauderdale/Hollywood International Airport and Port Everglades are located five miles from Davie. In addition to being well-served by transportation hubs, Davie is adjacent to ten other municipalities located in Broward County.

Open for business
The Town’s CRA offers incentives to businesses including grants for property improvements and rental reimbursements for small firms. In addition, companies are drawn by the Town’s low tax rate and a pro-business mindset.

“When a potential developer comes to Davie, they get meetings all the way up to Town Administration and Town Council in order to get feedback on their projects ahead of time. I think they appreciate that we’re no-nonsense and we get their projects through our development review process in a timely manner,” says Holste.

The educational institutes themselves are some of the biggest employers in town. Nova Southeastern has 5,500 employees on its campus while Broward College has 1,900, says Holste. Major private sector employers include Allergan, a pharmaceuticals company owned by worldwide firm, Teva Pharmaceuticals, and Stryker, a medical technology company.

One of most highly anticipated developments in Davie concerns the opening a 200-bed hospital to be located at Nova Southeastern University. The hospital is part of a planned “academical village” that will also feature medical offices, research facilities, commercial and university facilities. In total, the village will comprise 2.5 million square feet of office, medical, commercial and retail space, reports Miami real estate developer, The Brandon Company. Once open, the hospital and village will attract large numbers of healthcare professionals and other workers to the community.

“The Town has been an active partner with Nova Southeastern to bring the hospital to Davie and see the academical village project to fruition,” says Holste.

This isn’t the only major development on the go. Eager to entice new companies and residents to town, the Davie CRA is investing roughly $20 million in capital improvements within its boundaries with a focus on water systems, sewers and roadways. The CRA has also released a request for proposal to see private partners develop its downtown center, which is a multi-acre project featuring extensive commercial, retail and residential development.

According to Davie’s 2016 Annual Strategic Plan Report, the Town experienced over $400 million worth of new construction growth in the three years prior to the study. The report forecasts hundreds of millions of dollars in additional construction for the near future.

“We’re looking [to attract] sectors that have growth like health sciences and computer sciences, but we really haven’t been too focused on any one particular industry,” explains Holste. “We want to bring in businesses that have middle to high income levels to support the consumer base of the town.”

A winning lifestyle
Davie officials haven’t ignored lifestyle considerations in their economic development plans either. The downtown revitalization project includes investments in measures to make the area more walkable and livable, such as crosswalks, wider sidewalks and traffic-slowing initiatives. Town officials also hope to lure more restaurants, hotels and retail into the downtown to make it a more engaging environment and an entertainment destination.

Davie’s status as an educational and economic epicenter is all the more remarkable given the hardscrabble history of the town. At the turn of the 20th century, what is now Davie was mostly uninhabitable swamp. At the urging of Florida Governor Napoleon Bonaparte Broward, drainage and land reclamation efforts were made. Land sales commenced. Early investors included businessman R. P. Davie who purchased roughly 27,500 acres in 1906.

Settlers slowly arrived, lured by promises of good farm land and a warm climate. The first permanent pioneers settled around 1909, originally calling the community Zona. The name was changed in 1916 to Davie, in honor of the land owner who kickstarted settlement.

Initially, Davie was a rural community with a focus on dairy farms and orange groves. Life was tough for early settlers, who had to cope with a hurricane in 1926 and major flooding in 1947.

As Davie grew, it became known more for its post-secondary schools than for oranges. The town has retained the spirit of its agricultural heritage, however. The annual two-day Orange Blossom Festival takes place in late February and features rodeos and a parade. This isn’t the town’s only rodeo event either; each November, Davie hosts the Southeastern Circuit Pro Rodeo Finals.

Davie has also honored its heritage by preserving the Old Davie School—the first school built in the Florida Everglades, says Holste. The school, which marks its centennial next year, is now a museum celebrating local history.

Other local attractions include the Young at Art Children’s Museum which promotes youthful creativity, and Flamingo Gardens, a non-profit facility featuring various animals and plants. For the more athletically inclined, the Nova Southeastern University campus serves as the training camp for the Miami Dolphins. Davie has an extensive amount of green space and parkland that includes over 165 miles of trails for horseback riding, cycling, jogging, hiking, and more. The main athletic facility in town, the Pine Island Park Multipurpose Center, offers a wide variety of sports and rooms for meetings, clubs, arts and crafts, and other activities.

Housing and growth
Asked to describe the biggest challenge facing Davie, Holste says, “I think the challenge is balancing the new growth with our operating needs because again, we’ve seen a lot of growth. We’ve seen about 10,000 residents move into the Town of Davie over the past five or six years. As your population increases, your operating needs increase as well, so you have to find that right fiscal balance to provide the level of service expected by the residents.”

In addition to career opportunities and good access to transportation, many of these newcomers are attracted to the town’s enviable quality of life.

Families “will find everything they need or want here. The town has a strong secondary education system in terms of elementary, middle and high schools. We also have the South Florida Education Center. We have a variety of housing stock, an extensive open space and park system. Any activity you want to do, you can do in town,” says Holste.