Living Proof You Can Have It All 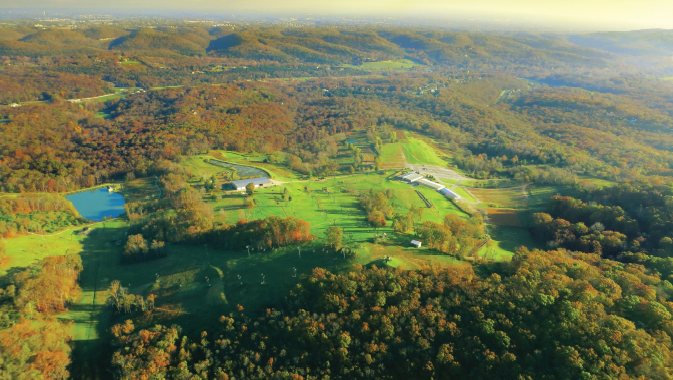 The City of Wildwood, with a population of approximately 36,000, at 68 square miles is the largest city in area size in St. Louis County and the third largest in the State of Missouri. Positioned at the foothills to the Ozarks, it’s known for its stunning physical landscapes and rich quality of life.
~
“Wildwood offers the best of both worlds – we are one of the largest municipalities in Missouri in terms of both population and land mass,” says Jim Bowlin, mayor of the city of Wildwood. “As part of one of the largest metro areas in the United States, that gives our residents and businesses the ability to enjoy some of the best nature in the State, while at the same time, having easy access to all that a large metro area has to offer.”

The City of Wildwood has evolved over the years. “Prior to 1995, the Wildwood was composed of a large portion of unincorporated St. Louis County, including 11 smaller historic communities dating back to the 1800s and early 1900s,” says Economic Development Manager Julian M.D. Jacquin. “As suburban growth occurred in St. Louis in the 1960s and 1970s, interest grew for new residential subdivisions in the area now known as Wildwood. At the time, county regulations allowed for large sites of residential development without any conservation or recognition of the natural environment and impact to neighboring residents. Plans had been identified for a new north/south ‘Outer-Belt’ that would split the region in half, and bring high-speed traffic through the heart of the community.

“In September 1995, residents in the area approved the incorporation of the City of Wildwood to preserve a voice and take control of Wildwood’s future growth and development. This allowed the residents to preserve the natural environment, establish a separate identity and plan for their community,” he explains.

“Within the first year, the City of Wildwood adopted a Master Plan identifying distinct portions of the City designated for certain uses. The plan established regulations for development and environmental protections, including a more detailed analysis of the impact on the natural environment,” says Jacquin. “Standards adopted by the City have resulted in high-quality, new residential developments that have more than doubled the number of residents in the area. More recently, the Master Plan has placed more emphasis on economic development and increased employment opportunities for City residents, many of whom still commute to St. Louis for work. The City has begun taking a proactive approach to promote more retail and office development to complement the residents and bring more employers to Wildwood. As its own municipality, the City preserves its natural environment and ensures future development is completed carefully and properly,” says Jacquin.

“Wildwood is unlike any other City in the region,” he emphasizes. According to Jacquin, Wildwood residents represent the top level of affluence and disposable income and Wildwood offers them a real sense of small town community. “I always say that we are a big city, but we are also a small town.”

The City’s heavy focus on high quality of life and small town charm sets it apart. “All commercial activity is directed to our master-planned New Urbanist Town Center in the heart of the community,” says Jacquin. “This makes it possible to preserve the remainder of the City for its large regional parks, trails, schools and residential areas. The City of Wildwood is widely known throughout the region for our physical landscapes and high quality living.”

The City is also unmatched for outdoor recreation. “With four regional parks and six municipal parks, the City offers over 11 square miles of parks and over 50 miles of hiking, biking and equestrian trails throughout the community,” says Jacquin. “Wildwood Community Park is a 66-acre, six-phase investment of approximately $12 million, including open play space, playgrounds, water features, a city dog park, six pavilions and reserved meadows. It is truly one-of-a-kind and unique to the entire St. Louis region,” he shares.

Wildwood is a special place. “Our only challenge is where we are in the evolution of a 20-year old municipality,” says Jacquin. “This is more of an opportunity than a challenge, as we are just getting started. We have built a consumer base and are in the beginning of our evolution, which is the ideal time to focus on new opportunities. We have spent the last 20 years as a community building and implementing our Master Plan, and are now in an excellent position to continue our growth efforts.”

Wildwood is proud of all its many benchmarks and accomplishments. “In accordance with the City’s Master Plan, our Town Center area has seen tremendous residential growth in recent years, with over 700 homes currently under construction (or planned for construction) in the heart of the community,” says Jacquin. “Designed by industry-leading planners, the Town Center provides a premiere location for locally-owned businesses in a forward-thinking, walkable environment with a healthy, active vibe.

“While this residential growth has occurred (and will continue to occur), the City is still able to preserve its natural beauty,” says Jacquin. “The City has a well-recognized natural beauty, and we have been able to preserve that landscape and still create room for growth. This has resulted in Wildwood being consistently recognized (and awarded) for Best Small Towns for Families, Great Schools, Featured Trail Town, Best Places to Live, Best Hiking Trails and so on.”

With the recent hiring of its first Economic Development Manager, Wildwood is placing a new emphasis on economic development conditions. “This approach seeks to improve the economic climate of the City through business retention, expansion and recruitment,” Jacquin explains. “Over the last year, we’ve worked with a consultant to create an Economic Development Guide, and plan for growth in identified areas of the community. Since then, the City Council created a new standalone Economic Development Committee to oversee this new initiative and make recommendations to the City Council. As the newly hired Economic Development Manager, Jacquin is the liaison at City Hall for the business community and is responsible for executing the economic development strategy adopted by the City. This new position allows the City to commit the necessary resources to retain and expand local business, identify new employment opportunities and recruit new retail and office users to the community.”

To be sure, the City of Wildwood’s unique physical landscapes and outdoor recreation is its primary tourism draw. “Much of the City’s economic activity is focused around parks and trails operated and maintained by the Missouri Department of Conservation and St. Louis County Parks and Recreation,” says Jacquin. “We have more parks and trails than any other city in St. Louis. And Hidden Valley Ski Resort is the only ski resort in the St. Louis region, and creates an immediate tourism draw to the City for skiing, snowboarding and tubing.”

The City of Wildwood also offers great access to education. “The City’s dominating presence in high quality living has generated some of the most highly-recognized educational institutions in St. Louis,” says Jacquin. “This includes the award-winning Rockwood School District (one of the largest school districts in St. Louis), and the St. Louis Community College: Wildwood campus (constructed in 2006, and the newest campus in the St. Louis Community College system). Educational institutions are the City’s largest (and most dominant) employer, and provide unmatched service to the City’s residents.

“The combination of these factors creates a very professional daytime population in the City of Wildwood, and one that consistently attracts new residents and tourists,” says Jacquin. “Due to the increasing number of new residential units being developed in the City, there is also a heavy inflow of construction crews helping build homes for new young families, millennials and empty nesters. Our combination of parks, trails, ski resort and special events create a mountain-style feel to the community, and much of the new development in the City reflects this. New homes are built with the look and feel of lodges and cabins you would find in Colorado, and new commercial development is pedestrian-friendly and aesthetically pleasing,” says Jacquin.

It’s an exciting time in the City of Wildwood, and it is just getting started. “The City of Wildwood has evolved to its current state with a well-conceived master plan,” Jacquin explains. “This document is the backbone of the City’s identity, as it recognizes the City’s significant history, and also emphasizes the importance of the City’s high quality of life and opportunities for outdoor recreation. Now 20 years old, we have begun to promote more retail and office development to complement the City’s residents and bring more employers to Wildwood.

“Even though we have nearly 36,000 residents across 68 square miles, with new homes being developed every day, we prefer to be recognized as a ‘small town,’ featuring local amenities, small businesses and a close-knit community feel,” says Jacquin. “This kind of localized charm can be very good for residents and our business community.”

As the City of Wildwood continues to move forward, it aims to preserve its identity, maintain its high quality of life, and attract new business opportunities to its “forward-thinking, walkable environment” with a “healthy, active vibe.”