‘We Can Get It Done’ 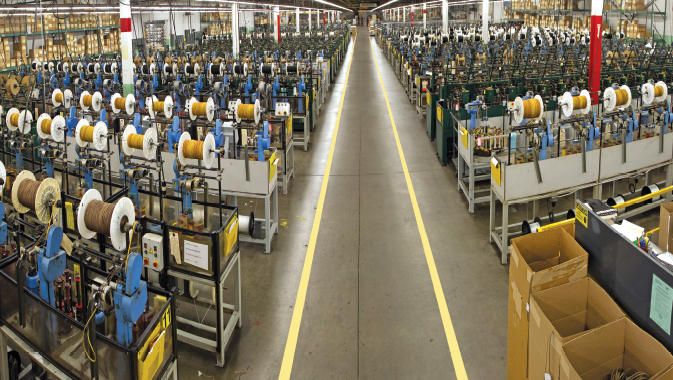 Hope Global is a 136-year old manufacturing company with its origins in textiles. It got its start on Rhode Island, but it now has locations all around the world. With a strong dedication to both its workforce and customers, Hope Global remains a close-knit, hands-on company with the
~
Hope Global began as a braided cord company and was eventually bought by the Casting family. Today, it remains a privately-held, family-run company that does braiding, but it has also expanded into knitting and weaving of fibres and wire and manufacturing interior automotive components which include wrapping, plastics, foam interiors, and a components’ division that has been expanded.

“Our name is exactly what it is,” says Cheryl Merchant, President and Chief Executive Officer of Hope Global. “The word ‘hope’ comes from the official state motto of Rhode Island, where we were founded, where our headquarters is situated, and where 300,000 square feet of manufacturing continues.”

The word ‘global’ is self-explanatory. “We are global; it is part of our vision,” says Merchant. “We have locations all over the globe—from Suzhou, China to Auburn Hills, Michigan.”

Hope Global is a full service, automotive supplier with a ‘we can get it done’ attitude. “We design, develop, and we consider ourselves experts as far as calling for when a design will or will not work,” says Merchant. “We take it from launch to end-of-product, to end-of-lifetime—from our high-quality standards to our perfect on-time delivery scores and products that are functionally superior,” she explains.

“I can’t believe the highs and lows that Hope Global has gone through,” says Merchant. “We were on an upward path in 1999 and reached a point where we tripled ourselves. We bought two companies and were fast expanding when we got hit in 2008, as everyone did. So, we cut ourselves in half, shut multiple factories down, and consolidated stream line. And we built a really tight team where every operator could do three and four jobs.”

Hope Global is very proud of its employees. “We’re blessed with having a workforce that is nearly as old as Hope Global,” says Merchant. “Some people are celebrating forty and fifty year anniversaries; those who started with the company in the beginning and understand everything about the company and its products. Our workforce is very tight and very strong, so we were able to knuckle down and survive where many could not,” she says.

“Survival was the name of the game at that time,” says Merchant. “We had fifteen customer bankruptcies, suppliers were lost, and we closed many factories. But we survived, and from 2010 to 2013, we continually had double-digit growth. The board of directors then switched positions and made a decision to double, and that’s exactly what we have done in the last three years.”

Right now, Hope Global is on the path of a very high-end, fast-paced growth. “We have hired somewhere in the neighborhood of eight hundred people since January, and we need another five hundred,” says Merchant. “We are facing exponential growth with extensive amounts of capital investment, with tremendous amounts of hiring and training, and we are doing it by remembering our core and our roots.”

Hope Global is very proud of its numerous accomplishments, one of which is how its product lines have succeeded in being very vertically integrated. “We do our best to buy the rawest of materials and make everything ourselves,” says Merchant. “We trust our own quality, our own support, and development path. We’ve also recently done that with plastic and foam. So, we now do both injection moulding in plastics as well as poured foam, and that continues to grow.”

Merchant shares that, “We survived two tremendous floods in our headquarters, lost the entire operation, and came back without ever missing a customer delivery—without ever missing a beat. We lost a tremendous amount of dollars, but survived and took care of the company. So, the accomplishments have really been amazing, especially this last year with nearly $70 million in new business.”

At Hope Global, employees come first. “We believe in our workforce, first and foremost,” says Merchant. “If you don’t start there, you’ll never be able to take care of the rest. So, we believe all are equal. And we treat all equal and fair. It doesn’t matter if you’re the president or the janitor, everyone deserves respect and will be treated that way. It’s vital to this organisation. We do that with continual communication across the globe. Every employee knows the exact status and where the company is at and what our visions are and our objective. There’s training programs that are extensive—actually mandated levels of training—and we’re constantly working to develop our workforce and take them to new levels and offer opportunities that everyone is looking for.”

The company’s website also features its employees’ stories, because “we believe that the employees are a key part. When some unit is launching or when anybody’s having an issue, you’re just as likely to find me out there,” says Merchant. “Whether I’m making or building a part, whether I’m standing in the lab with the testing going on. We once launched a product, and, due to complications, we went from being ahead of schedule to chartering parts. Everyone was down in Mexico working on this part, when myself and my entire executive team came walking across the floor at 7 AM on a Saturday morning. It was ‘wow, that doesn’t really happen.’ But, I think it should. We know everybody by name. We know each other, and we take care of each other. We’re very hands-on, and we do not want to lose the family aspect of our company. When I say ‘all hands on deck,’ that’s exactly what I mean.”

In the company’s vision, the customer is an extremely important partner, and so Hope Global makes every effort to have customers succeed. “If you’re working really hard to make your customers succeed, you end up succeeding yourself. We want our customers to succeed, and we work hard to give our customers what nobody else can in order to help win them business, and that will take them to whatever vision they’re looking at. That’s a huge part of what we believe in.”

Hope Global also looks after community at its sites around the world. “We take care of those around us in need, as well as the land that we sit on. That’s vital to us.”

A lot of Hope Global’s marketing is done via social media and the internet. “It’s an avenue of communication, and we use every avenue we can,” says Merchant. “The website and social media is all very linked to Hope Global, even though we are 136 years old. And we are working to continue to stay caught up,” she says.

“I’m (personally) a huge believer in manufacturing,” says Merchant. “I believe we need to make things. There are tons of products that make this world what it is; I believe in global manufacturing, and I think we can never lose that. There are tremendous amounts of jobs out there, from engineering to IT from the financial aspects of managing the costs of products and the profitability of making things to the supervision that know how to lead groups of people towards a common goal. It’s just a tremendous opportunity, and I would encourage everyone out there, from whatever age group, to explore those opportunities if looking for a very satisfying career.

“I encourage, from the speeches I give at universities and high schools or to young entrepreneurs, that manufacturing is an amazing world with many, many opportunities, and it’s worth exploring,” says Merchant.

As for what the future holds, there is no limit to this company’s potential. “We have a very supportive board of directors and a very ambitious, hard-working and capable team. I don’t think there’s anywhere we can’t go,” says Merchant. “And we’re going bigger and better.

“It all comes down to people,” says Merchant. “It comes down to having a workforce that has tremendous ambition and ability, and Hope Global has that.”