Proud to be Made-in-the-USA 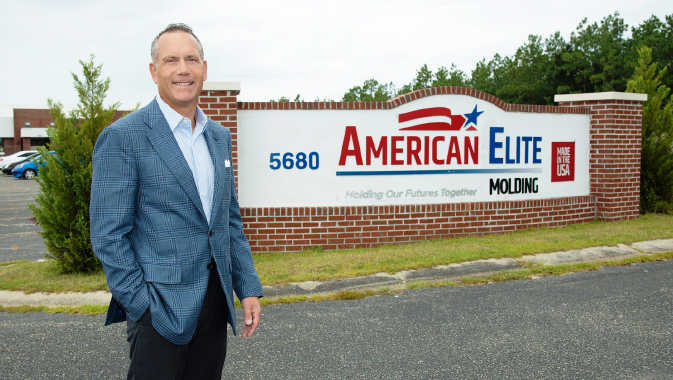 American Elite Molding (AEM) is a highly successful manufacturer that blends sound business practices with patriotic principles. This leading producer of nylon cable ties in the United States uses American supplies and suppliers when possible and produces its wares domestically.
~
“Approximately ninety-seven percent of what we sell is made here in our facility in the U.S. There are some oddball items that we don’t actually make, that help fill out our line, but really our focus is making and selling what we do here in the United States,” states founder and Chief Executive Officer Bob Sires.

The company’s head office and manufacturing facilities are based in Crestview, Florida. The firm produces over 1.5 billion cable ties a year, has enjoyed twelve years of double-digit growth and boasts annual sales of $25 million. With distribution centers in Florida, Indiana, California and Connecticut, AEM offers speedy delivery nationwide.

With its emphasis on products being made in America, AEM is proudly defying the trend that has seen U.S. companies move manufacturing operations to cheaper foreign locales.

“I get disgusted when people say we can’t do it successfully here. I have several companies in different industries, and my philosophy always is, ‘We’re going to do it here in the U.S., and we’re going to do it better than everybody else.’ And we’ve proven we can do that,” states Sires.

Maintaining very high standards is one of the secrets of AEM’s success. In addition to being MIL-SPEC approved, “we constantly have visitors in here to inspect us. We have a very robust quality department. We have full traceability. We can take almost any cable tie that we make, and we can trace it all the way back to the person who made that cable tie and the material used to make it. We’re testing twenty-four hours a day, seven days a week. If we have a bad product out there, that would be a disaster for us.”

AEM began life as Bay State Cable Ties, a firm founded by Sires in Massachusetts in 1998. In 2004, Sires moved it to Florida and set up a manufacturing plant. Sires says he appreciated Florida’s pro-business, low-tax environment.

The company achieved MIL-SPEC certification in 2008, which meant it could bid on all government contracts. Two years later, Bay State Cable Ties won a contract with 3M to manufacture private-label cable ties, and 3M remains one of AEM’s biggest clients.

“About seventy-five percent of our business is what we call private-label business. We make the products, and we put other people’s labels on the products,” explains Sires.

He knows the danger of relying too heavily on a single major client, however. “I don’t want to focus on one customer, so no customer is more than five percent of sales. And we play across all product lines, including heating and air conditioning, electrical, electronics, do-it-yourself, telecommunications, aerospace, marine, et cetera. We target the leaders in those industries and try to work with them.”

The firm continued growing, even during the 2008–2009 recession.

In 2015, Bay State Cable Ties added 25,000 square feet to its Crestview operations, an occasion marked by a ribbon-cutting ceremony attended by Florida Governor Rick Scott. The expansion was accompanied by significant internal investments. Between 2012 and 2015, the firm spent over $4 million on new equipment. And in 2016, the company also added four new molding machines.

Also last year, it added new warehouse facilities and officially changed its name to American Elite Molding. The change reflected the fact that the term ‘Bay State’ specifically refers to Massachusetts, not Florida, and the old name suggested the company was a regional enterprise.

“We wanted to portray ourselves as what we really are, which is more of a North American company. We can service everybody in one day. And we feel we are an elite manufacturer,” explains Sires.

The firm has come a very long way over the years. In just over a decade, the company expanded from 4,000 square feet to 75,000 square feet in size while personnel numbers grew from three workers to 160 today.

Besides the fact AEM makes excellent cable ties, Sires says the company’s rapid growth is a testament to its service-minded attitude. “I think we service our customers better than anybody else does. We provide superior customer service. We work with our customers, listen to their needs and meet their demands. And that’s why [we’ve seen] double digit growth year after year.”

Sires fully anticipates this growth to continue. “The only thing that stops us from growing is [the cost of] adding machines. Right now, we have fourteen custom injection molding machines. Each line costs about $1 million. We’re trying to add at least one line a year,” he states.

With this in mind, AEM looks for new hires with a positive mindset and spirit. “I want good people that are happy to be at work. It’s all about attitude for me. If you have a positive attitude, you can do anything. Almost every one of our supervisors and floor techs and people in key positions started with us from the ground floor,” states Sires.

“It’s not a political statement; it’s just a personal statement, but I believe people can’t survive on minimum wage. It’s just not a fair thing to do. We start people at $10 an hour. After ninety days, they get a fifty cents raise. We continue to give them raises. We have a 401(k) plan, we pay full medical benefits for people, and we constantly have training so that they can improve [their skills]. We have a lot of employees that have been with us for a long time, and that’s because they feel that they are part of a family,” he says.

Such efforts have earned AEM much goodwill. In January 2016, Sires won the Governor’s Business Ambassador Award for job creation from Florida Governor Scott. American Elite was a finalist for the 2016 Florida Manufacturer of the Year Award, in the medium-sized manufacturer (75–200 employees) category. American Elite Molding was also among fifty companies chosen in a 2016 competition of Florida companies to watch, organized by an economic development agency.

Winning such awards is “the culmination of the hard work and effort that we put into everything,” says Sires.

The company does not plan to rest on its laurels however and is always looking to improve. AEM recently hired consulting firm Hallet Enterprise to review its operations. Hallet investigated ways to increase efficiency, cut waste, minimize errors, enhance shipping and empower employees. Hallet’s investigation and training resulted in a fifty percent increase in assembly process productivity. The consultancy also showed employees how to detect defects early in the process and implement corrective solutions.

Sires, who is a strong advocate of lean manufacturing and Six Sigma principles, says these improvements came at a minimal cost. “It was just a matter of redeploying resources and moving things around. And from that, we significantly improved our throughput. We sell a commodity product. The price on a commodity product is dictated by the market, so the only thing we can do is improve our efficiencies and reduce our costs to remain profitable.”

AEM belongs to several community and industry groups including the Northwest Florida Manufacturers Council, the Crestview Chamber of Commerce and the National Electrical Manufacturers Association (NEMA). American Elite is also involved with a Rotary Club scholarship program to promote science, technology, engineering and math (STEM) education in area schools. The company’s involvement in such groups reflects a desire to give back to the community and encourage young people to take up technical skills.

Such involvement is also a good way to promote the company. Other promotional efforts involve a website, tradeshows and social media. However, old-fashioned word-of-mouth is one of AEM’s most effective marketing tools, says Sires.

As for the future, the company continues to look at adding new products or services while maintaining its upwards trajectory. In five years, “I would be very disappointed if we’re not at least – just in the cable ties sector – at $60 million in sales and 250 to 300 employees.”

AEM plans to achieve this growth while retaining its ‘Made in the USA’ focus. “I believe when we get our customers in here and show them that it can be done successfully in this country, at the price they need to be at, and we’re keeping Americans employed, and helping our own economy, it works out for them too,” says Sires.