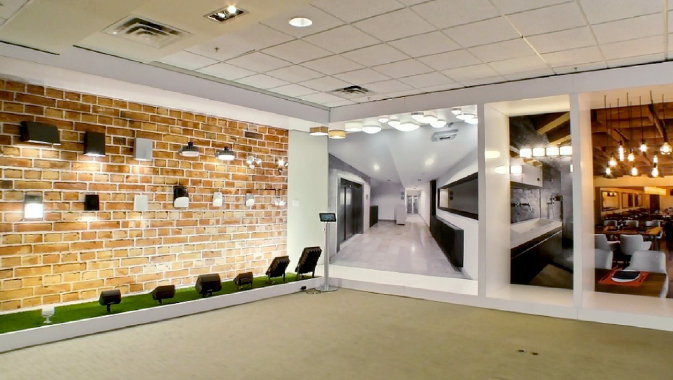 STANDARD Products is a Canadian-based lighting company. This full-line lamp and fixture manufacturer serves the Canadian market from coast to coast, with a passion for saving energy.
~
STANDARD started as a lightbulb supplier and manufacturer. “We basically brought in lightbulbs for the market, and with time and technology, things evolved, and today we offer a full line of lamps and ballasts, as well as lighting fixtures,” says STANDARD Executive Vice President Jason Prevost. “In the last five years, we have made a significant transformation to our business and our business model, transitioning the organization from a lamp company to a fixture company.”

“The organization started back in the 1970s. Haskel Nathaniel was in the business of importing things – products that he enjoyed, such as playing cards, shoes, luggage. With time, that business evolved a bit, and in 1982, he started to bring in electrical tape. That’s when David Nathaniel (his son) got involved with the business.”

When David Nathaniel made a trip to Toronto to meet a friend, he asked his father if he could make some sales calls while he was there. “At the time, they couldn’t support the employees,” says Prevost. “So, David decided that he would just go out on his own, make a sales call and see a few people, and if it developed the business, that would be good for his father.”

“He was able to land a meeting with a buyer at Canadian Tire,” says Prevost. “Long story short, they ended up placing an order that was the biggest tape order that STANDARD ever received.

“The following month, they got a repeat order, and from there, David Nathaniel got involved in the business,” says Prevost. “In 1983, he ended up going to Asia and finding some partnerships with light bulb manufacturers who would then build and design products based off of our requirements. From there, the business took off for lamps. We made some key acquisitions; we expanded the product line, and in the year 2000, we really began to transition our business to what we’ll call a full-line manufacture of lighting products.

“We made the transition to LED light bulbs in 2010,” says Prevost. “And in 2015, we saw further changes from the industry and transitioned our business to start playing in the fixture arena.”

Today, with approximately two hundred employees across Canada, STANDARD has a vast selection of LED lamps and fixtures while supporting some of the traditional technology that the market still requires.

STANDARD has a unique selling proposition that really sets it apart. “We structure ourselves a bit differently in terms of our sales force,” says Prevost. “Where typically, lighting companies would work with agencies, we employ our direct factory reps. We have over thirty factory reps across Canada who work one hundred percent for STANDARD, which allows us to really focus in on the needs of the market. Those reps are working with contractors, building owners, property managers and really trying to make a difference and save energy,” he explains.

“So, we’re able to develop products based off of those needs and respond to the requests from the utility companies, our customers, and end users in the function of saving energy,” says Prevost. “While it’s a bit more of an investment in terms of a business model, our passion is to save energy.”

With three facilities across Canada, STANDARD has coast to coast inventory. “The customer is never that far from our products,” says Prevost. “That’s another differentiation between us and some of the other businesses that may operate out of Canada or the U.S. Our customers can have next day/same day shipment for orders placed. In a very diverse and changing market where inventory and costs of inventory are increasing, our customers have said that is a significant advantage of picking us over some of the other companies in our field.”

STANDARD also offers a turnkey energy audit and upgrade service. STANDARD assesses the current energy usage of a building or facility, and its goal is to uncover opportunities to economically replace existing lighting systems. STANDARD will provide end users with a detailed report including all key elements required (cross-effect, energy savings, etc.) to help guide them through their decision process. The company will also inform end users of strategies to help them reduce their overall energy consumption.

As part of the energy audit process, STANDARD will analyse the end user’s current yearly energy usage and related costs and propose a lighting retrofit solution and its projected payback period of the investment as well as the return on investment. Next, the team provides end users with a complimentary lighting layout when the project requires lumen output data, and will verify if the local utility company offers a rebate for the proposed product. “We will even look after all the paper work involved for the eligible rebate. And all of this at no cost to the end user.”

STANDARD is proud of its many accomplishments. “As a family business, the goal was just to be able to offer something to the market that some of the bigger incumbents couldn’t offer. Today, however, STANDARD is now the second largest lighting company in Canada, just behind Phillips Lighting, but ahead of Sylvania and GE. That was a really significant accomplishment.

“With the company’s transition to the LED lamp and fixture market, STANDARD also implemented SAP as an operating system,” says Prevost. “It was a successful implementation, and from what I’ve been told, very rare, and a big feat for a small company. We have been running successfully on SAP ever since.”

STANDARD has garnered significant recognition in the industry. It is currently a Platinum member of the Best Managed Companies in Canada. “We’ve won the award seven years in a row,” says STANDARD Digital Marketing & Communications Director Stephanie Santini.

The company has also recently received a corporate social responsibility award from Electro-Federation Canada, for the work that it does and for what it gives back to the community.

“Our partnership with Habitat for Humanity was an initiative taken to really give back to the communities in which we do business,” says Prevost. “We thought it was a great opportunity because our product offering really aligned well to what Habitat for Humanity is trying to do.

“We do give and we do participate in different non-profit organizations across the world, but being able to give back in our own backyard was really important to us as an organization,” says Prevost. “We have really taken it to heart, and we participate every year in building three homes for families across Canada. We donate product, and we donate time. We’re also a corporate sponsor of Habitat for Humanity; we donate twenty-four lamps for every home built in Canada, so that the families have free, energy efficient lighting,” he says.

The company has five basic core values. “They originate from the ownership team and are shared throughout all of our employees,” says Prevost. “They are: Win as a team. Wow the customer. Treat others like you want to be treated. Have fun. And be your best.

“Each one of these core values is very important to every individual from the warehouse team, all the way up to ownership, and we live these through our day-to-day interactions as individuals, both internal and external to the organization,” says Prevost. “I’ve been often told, in front of customers, that, ‘Man, you guys really know how to have fun,’ and that’s really part of what we want to feel. We enjoy what we do and our ability to improve a workspace or home by providing proper, energy-efficient lighting.”

“STANDARD is a great success story,” says Prevost. “Some of our customers have said that we would make a great case study for a university because of the amount of change that’s happened in the last ten years, in the industry in which we play in. There have been significant companies that have closed their doors because they couldn’t change, but we continue to be successful. We continue to grow. We continue to be a very profitable organization.”

The future looks bright for STANDARD as the lighting market and industry evolves and technologies change. “I think in the last five years, there’s been more change in the lighting industry then there has been in the last hundred years,” says Prevost. As STANDARD grows, it aims to keep up with these changes, all the while giving back to the community and helping to save energy.