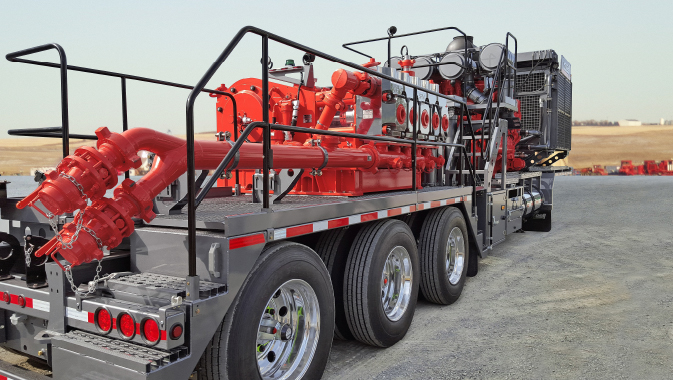 Propell has become one of North America’s leading producers of oilfield equipment. In addition to making equipment for oil and gas extraction, Propell offers refurbishment, training and after-sales support services. The company is proud of its products, technological edge and rigorous adherence to safety and quality.
~
Much of what Propell makes is used for ‘hydraulic fracturing’ – that is to say, extracting gas and oil from formations of shale rock. ‘Fracking’ as the process is commonly called, involves high-pressure injections of fluid (generally, water, sand and other materials) into the ground to fracture the rock in order to extract the oil and gas.

Propell recently acquired a Texas oilfield equipment manufacturing operation, expanding its reach and output while further tapping into the North American market. “We have three locations. Our manufacturing, engineering and administration is in Rosedale, British Columbia. Our largest manufacturing facility is going to be in Granbury, Texas. We also have a refurbishment and testing facility in Calgary, Alberta,” says Propell Marketing Manager Ben Hiler. The company is extremely focused on its target market. “Propell is strictly oil and gas,” states Hiler.

Propell’s product line includes the Sandstorm modular proppant handling system, the Frac Pump Unit, Gemini Twin Pumper, Coil Tubing Unit, Chemical Van Unit and Nitrogen Unit. A pressure pumping unit is the same thing as a fracking unit. Proppant is sand or other materials used in hydraulic fracking to hold the fracture open. “That would be our flagship line of products. Those are the main products we manufacture,” states Hiler.

The Frac Pump Unit is an integrated pressure pumping platform designed with safety, stability, low-cost and low-noise in mind. The Gemini Twin Pumper contains a clear-view composite cab, slide-out iron rack, and on-demand, cross-over chemical injection process piping, among other features. The Coil Tubing Units are all customized according to the application and work environment the client has in mind. The Chemical Van Unit is a first-of-its-kind vehicle offering a clean, safe, climate-controlled space for operators to work, recording data and other tasks. The ViperBelt is used in tandem with the Sandstorm system. The ViperBelt takes proppant from a transport trailer then conveys it upwards and into Sandstorm containers, called GravityBoxes. The process can be done by remote control.

The system generates minimal dust – in contrast to the pneumatic trailers traditionally used when loading fracking containers. This feature reflects Propell’s eco-friendly attitude and the fact government agencies such as Occupational Safety and Health Administration (OSHA) are getting strict about the amount of potentially harmful dust kicked up at work sites.

According to Propell, Sandstorm is highly mobile and can be set up in under three hours. While easy to set up, the system is slightly more complicated than other Propell products, so the company offers on-site client training for anyone using it. The company also sells parts for its products.

Propell’s main customers are oil and gas well service companies, some of which are located abroad. “We’ve had equipment go to the Middle East, South America and Russia, but our primary customers are in North America – Houston, Calgary, Colorado, West Texas. The major shale players,” says Hiler. The company will deliver this equipment wherever a client requests it, he adds.

In addition to manufacturing, Propell has a significant remanufacturing segment. Customers can bring in equipment that has been used in the field, and Propell will perform a full inspection, run tests, then put in any new parts or components that are required, manufacturing them up to the standard of the original equipment.

Propell was launched in 2008 by its parent company, Tycrop. Based in Rosedale, British Columbia, Tycrop describes itself as a “thirty-five-year-old product creation company that specializes in designing, engineering and building mobile industrial equipment solutions.” One of its specialties is industrial trailers. “Tycrop created Propell as their oil and gas division,” explains Hiler.

Getting customers in the early days was not a struggle. Building products to Tycrop’s demanding equipment specifications was more difficult, but Propell managed.

Propell continues to grow. In March of this year, Propell acquired the assets of Total Equipment And Service. This manufacturer of oilfield equipment is based in Granbury, Texas. The acquisition was designed to let Propell benefit from President Trump’s America First Energy Plan, which is intended to favor domestic oil and gas companies. Buying the Granbury location put Propell within easy reach of the huge Texas-based oil and gas industry as well.

The acquisition also doubled Propell’s manufacturing capabilities and boosted the size of Propell’s workforce from roughly sixty employees to two hundred. The Granbury facility includes a service facility, a machine shop, a fabrication shop and an assembly shop, and test facility.

There are no immediate plans for further acquisitions, “but expansion is always a goal … We’re continuously expanding right now. With the amount of service jobs coming in and the amount of new equipment that’s happening, we are expanding weekly,” says Hiler.

Propell was selected as the packager for the joint venture between the pump manufacturer Weir and engine manufacturer MTU. The companies came together to create a cutting-edge pressure pumping platform for fracking purposes. “We do not manufacture our own engine [for the project]; we don’t have our own pump; we don’t have our own transmission. But we package it all together in a safe, clean, efficient [fracking] unit,” he states.

Given the company’s rapid rate of growth, it is no surprise that Propell looks for certain traits among potential new hires, particularly a team spirit. “Everything is a group effort. Decisions are made in groups. We look for employees that match with the overall culture, which is a culture of the pursuit of perfection. We want all employees to recognize the importance of working in a safe environment – the importance of safety and efficiency,” states Hiler. “We adhere to a high quality of product… We have checks and balances at every point.”

In the same spirit, equipment innovation is a significant focus for the company. Its engineering staff is continually developing new products or making improvements on existing products.

As Hiler mentioned, safety is a huge issue for both the operators of Propell’s machines and the people making them. The company conducts routine safety checks and maintains procedures to identify existing or potential risks and hazards and come up with appropriate responses. Propell’s goal is a ‘zero harm’ working environment for employees. This emphasis on safety has been recognized; the Manufacturing Safety Alliance of BC honored Propell with a 2016 Safety Pinnacle Award.

Propell promotes itself with a website, attendance at trade shows, advertisements in digital and print media and emails to customers. The firm also does customer appreciation events. That said, promotion really comes down to a great deal of person to person interaction between the sales team and the customers.

The firm participates in local and regional charity events, such as golf tournaments and drives for school sports teams. Most charity activities are initiated by employees, with the company’s full backing.

Propell’s forward momentum was slightly blunted when oil prices slipped drastically a few years ago, from a high of nearly $200 a barrel. “The whole market took a dip when that happened. With the dip in the oil and gas sector, lots of service companies, lots of manufacturers went out of business … We were fortunate not to get hit as hard as other companies, but it definitely affected us over the last two years,” states Hiler.

With Tycrop’s backing, however, Propell endured the storm. Propell used the downturn in business to focus on improving manufacturing efficiencies and boosting quality.

Propell is currently working on expanding and enhancing its Sandstorm line, adding new features. Another huge challenge is living up to engine emission standards, set by the United States Environmental Protection Agency (EPA). New EPA ‘tier IV’ requirements for non-road engines mandate stricter emissions standards to which manufacturers such as Propell have to adapt. “It is a tough challenge but one that Propell is more than up for,” says Hiler.

He admits that forecasting the future of the energy sector can be tricky. “If you can predict the oil and gas market, you will be a very rich man,” states Hiler. For all that, he is confident that Propell’s growth will continue.

In five years, Hiler envisions “new offices, new expansion and [boosting] the amount of production that can happen.”