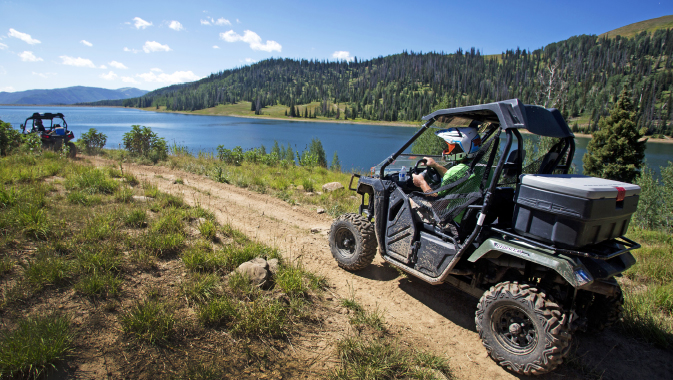 Sanpete County, Utah was established in 1850 and is nestled between the Wasatch Plateau on its eastern side and the San Pitch Mountains to the west. This largely agricultural region is also known for being a popular travel and tourist destination. From snowmobiling to the Arapeen trail, rock climbing and golf courses, Sanpete has something for all tastes. We spoke with Sanpete County Economic Development Director Kevin Christensen about the area and its many attractions.
~
Sanpete is a small rural county, with close to thirty thousand residents. It lies within a valley surrounded by mountain ranges and this provides many outdoor recreational activities. The area is situated about an hour from the Salt Lake City and Provo metropolitan centers, but close enough that many visitors from the city will come to the country on weekends.

The valley contains thirteen communities, the largest of which has about seven thousand people. Its history is steeped in agriculture which includes cattle and sheep farming and a large turkey industry. Norbest turkeys are produced here.

“We have also been a big coal producer. A lot of people have worked in the coal industry and commute to mines just outside our community. There is a big concern that as coal production lessens it will negatively impact our economy. We are keeping a close eye on that,” says Kevin.

With that in mind, Sanpete needs to diversify, as agriculture is no longer what it used to be. If the coal industry goes away as well, new industries must be sought. It starts with developing a skilled workforce.

Snow College has been a traditional junior college and is ranked as one of the best in the country. There are approximately 5,500 students over two campuses in Ephraim and Richfield.

“We work with that college to develop new programs, one of which was just developed. It is a software engineering degree, which is actually a bachelor’s program. This is even though Snow College is a junior college,” says Kevin.

The school now features two bachelor’s degree programs. As well as the software engineering degree, there is a commercial music program. Enrollment comes from all over the state.

One of the top site selection factors for businesses is the availability of skilled labor and Snow College works to fill that need, especially in fields that are compatible with this rural location. Technology is something that the county can benefit from as Utah has a huge technological sector, known as the Silicon Slopes between Salt Lake and Provo. The location of Sanpete County is ideal since it is just a little over an hour to reach Provo.

“We are close enough to that cluster that we can foresee small offices and tech branches being in the Sanpete Valley that are affiliated with companies in Provo. It is often very difficult for these companies to get the labor that is needed, and we are going to try and provide that,” says Kevin.

One of the things that Sanpete lacks is interstate access. However, it possesses great broadband capabilities, and in some of the small towns that dot the county, you can get fiber right into homes. Not many rural communities have this advantage. In fact, a lot of urban areas do not have access to a fiber network for residential use.

“So, we have a good fiber infrastructure, a great quality of life with our outdoor recreation, and now we are developing software engineering. You don’t necessarily need to be in the city to develop software or to become a small [information technology] company. We are trying to develop that further to diversify our economy,” says Kevin.

Utah is a very friendly place for off-road exploring. It is an area blessed with great scenery, high mountain elevations, and the local and state governments promote all-terrain vehicle (ATV) and snowmobile use. This is not the case in many other parts of the nation. There are a host of places to ride an ATV, and one of the most visited trail systems is the Arapeen, named after a Ute Indian chief from the 1800s.

The Arapeen is located on the Manti-La Sal National Forest, which includes over six hundred miles of roads and trails. These trails climb as high as 11,000 feet, and people are just beginning to discover its splendid views and many winding trail systems. At the summit, visitors can see both sides of the mountain.

“In all our valley towns it’s legal to ride your ATV, so you can stay in a motel and ride your ATV to the gas station, right up through town, up the canyon to the mountain. This is very unique, and in the city, this would simply not fly,” says Kevin.

The Arapeen Trail is open in the summer and fall seasons as well, and the trail system is one of the best in Utah. To the south is a neighboring system called the Paiute Trail, in another county. In the winter, due to the high altitude, both have great snowmobiling opportunities. At the top of the mountain range, is the Skyline Snowmobile Complex.

“It goes about eighty-seven miles along the ridge of this mountain range. It’s all back-country snowmobiling. There are some groomed trails up the canyon to take you right to the top. Once you reach the top, the choice is yours for destinations. It is the best place in Utah to snowmobile,” says Kevin.

Sanpete has several recreational maps that people can request. “If you go to our website at sanpete.com, you can request our free snowmobile map. There is also an Arapeen Trail map which we produced on a water and tear-resistant synthetic paper. It is a high-quality map that is on sale for $9.99,” says Kevin.

Another feature that lures people to the area is Maple Canyon, which is very well-known throughout the U.S. for rock climbing. A few years ago, Maple Canyon graced the cover of Climbing magazine, and there are over five hundred bolted routes for sport climbing. Preplaced bolts on the rocks can be clipped onto by climbers to the site.

It is a great opportunity for climbers in the summer because the canyon walls are very narrow and give plenty of shade. Other mountains are more exposed, so it may be too hot to climb in the summer months. It is all conglomerate rock, so it looks like boulders cemented together, giving it good hand and foot holds for climbing.

Sanpete County Economic Development has done much advertising on the internet as a part of the broader target marketing efforts. On local and state levels, there is involvement with outdoor recreation shows, where the emphasis is on the trail system and snowmobiling opportunities. Videos are also used to market outside of the state.

Another benefit to being in Sanpete Valley has to do with the cost of living. Housing in Utah generally costs less than most other states. When the economic development groups bring in company representatives for site visits, people are always amazed at the quality of home that can be had for such an affordable price.

“We also have a lot of open spaces, and you can readily get building lots for a reasonable price,” says Kevin. Looking to the future, Sanpete is ready for business and population expansion.