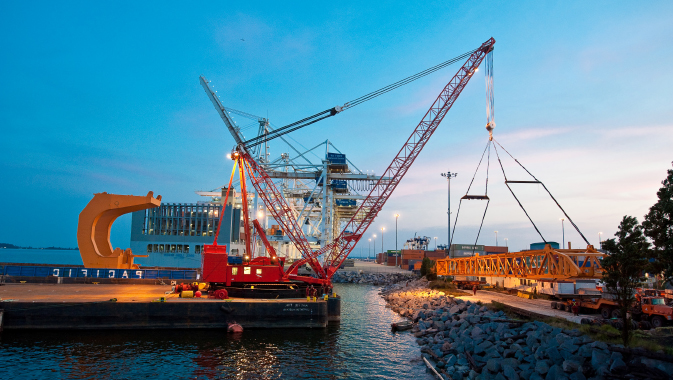 Amix Group is a collection of companies headquartered in New Westminster, British Columbia specializing in marine transport services, marine salvage, marine projects, steel and surplus sales, and ready-mix concrete delivery. This is a company with a broad range of capabilities, and it is actively seeking opportunities to provide a full scope of logistical services.
~
The company was founded in 1971 by Ed Jackson as a scrap salvage business and originally ran with a single truck based out of his backyard. As the project grew, he moved to the coast in Surrey and set up shop on the Fraser River. He opened the doors to local scrap companies and walk-in customers and watched the business grow from there. Eventually, he began shipping scrap to Tacoma on barges, which was the first step toward the marine side of the business.

Ed and his son Willie Jackson developed the business to become the largest scrap dealer in Western Canada. In addition to twenty plus barges that Amix was loading every day and shipping to Tacoma weekly, they were also exporting steel in containers to Asia.

In 2011, after decades of success, the duo sold the metal-recycling portion of the company to a publicly-owned American corporation, Schnitzer Steel. It retained the tug and barge side and expanded its heavy lifting capabilities by bringing in several cranes. Amix then got to work log barging on the west coast, while growing the infrastructure side of the business. The infrastructure work led to salvaging marine-recovered steel, and that resulted in the addition of a surplus component to the Steel and Surplus sales.

Today, the Marine Group consists primarily of three parts: a traditional tug and barge, an infrastructure business and a marine salvage operation. The tug and barge segment focuses on transporting products like logs from as far north as Alaska and as far south as Oregon or wood chips from Amix’s twenty-acre chip loading facility in Prince Rupert, British Columbia. These are moved to pulp mills in the lower mainland area and from the United States into Canada.

In addition to these two primary product types, the company also transports general cargo including equipment, aggregate, and scrap metal.

The other important aspect of the marine division of Amix is what it calls the projects group. This division has been involved in but not limited to construction and destruction of bridges, terminals, vessels and much more. Deconstructing vessels and marine infrastructure results in the company recovering large volumes of salvaged steel. Amix is the only industrial-scale marine vessel deconstruction company, and from that deconstruction, it collects motors, generators, and other scrap that can later be sold through its Steel and Surplus Asset divisions.

Steel also purchases steel directly from factories in the United States, Canada, Asia, and Europe. Amix’s deconstruction and decommissioning operation reaches beyond marine projects into land-based work as well. “We pull apart factories, mills, and buildings,” says Marra, “and from that activity, we collect beams, pipes, and much more.”

The acquisition of the company by Schnitzer Steel in 2011 was a defining moment for Amix. At the time, the company was focused primarily on scrap recycling, but with Schnitzer’s help, it was able to expand the marine assets that were already being used to move scrap and extend the company into many profitable areas.

Recently, the company has returned to its recycling roots but in a more industrial sense. Rather than collecting scrap from walk-in customers, the company salvages from its deconstruction activity and sizeable deconstructions performed by other companies along the Fraser River.

Amix Group is a company with many functions, and its ability to achieve them all is a testament to the quality of its people as well as their expertise and ability to adapt to the range of businesses into which the company has expanded. The staff consists of crane operators, iron workers, truck drivers, administrative staff, more than eighty mariners, and more. Each of them is committed to providing professional service to customers and to adding to their expertise.

There is a strong culture of safety that is upheld through diligent training. The company’s occupational health and safety program has been certified by the British Columbia Construction Safety Alliance.

The lower mainland and harbour areas throughout Vancouver have many great infrastructure opportunities that fit neatly into Amix’s unique skill set. There are two substantial bridge projects that are in various stages; several large grain terminals are being built, and many similar projects. Recent legislation to mitigate the environmental impact of derelict vessels on the coast or in the Fraser River and other populated marine environments is also presenting an opportunity for the company due to its expertise in vessel deconstruction.

One interesting sideline that Amix has stumbled onto is providing industrial and marine sets for the film industry. Port Mann Studio is a large building owned by the company that, while not a traditional studio, lends itself to what the film industry is looking for. Besides the building, scrap yards with giant cranes, waterfront, and decommissioned ships make for visually exciting environments for film crews.

For the first Deadpool movie, 20th Century Fox spent three months filming at Amix’s marine facility in Surrey, and the company made a name for itself as a film-friendly partner by helping the crew build film sets. Amix staged equipment including cranes and small vessels in the yard, set up scrap piles, and helped install the sets for stunts. The company sold 20th Century Fox the steel for the construction of the many environments they needed to create inside the studio.

Amix is committed to helping employees build lasting careers with the company. It brings new employees into entry-level positions but is constantly looking to move them up so that they can be leaders. In the marine environment, the company has brought in deckhands who have become mates and eventually masters, and every step of the way, the leadership is looking for ways to help them on their path. This includes helping them through school, providing training opportunities, and more.

“We’ve had a number of instances where guys who’ve worked with the company since the eighties have brought in their sons right out of high school, and they’ve become red seal mechanics,” says Marra. “So it’s a lot of support in providing jobs and helping people turn that job into a career.”

Finding qualified mechanics, crane operators, and mariners has been a challenge. “It’s a blue-collar business, and we face challenges in finding good qualified people as much as any other business that depends on skilled labour,” says Marra, “but we invest in our people.”