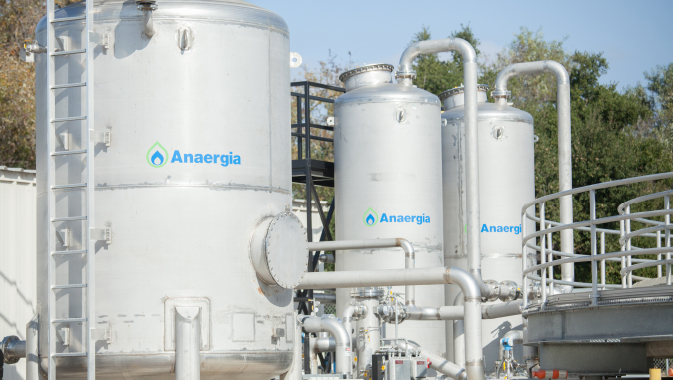 Anaergia’s proprietary technologies create renewable energy and fertilizers from municipal, agricultural, and industrial waste, generating new revenue sources for clients while reducing greenhouse gas emissions. The Burlington, Ontario-based company has fourteen satellite offices and three manufacturing plants from which it serves nearly two thousand resource recovery customers around the globe.
~
Back in 2015, we spoke with Anaergia’s Chief Executive Officer Andrew Benedek. He took us through a journey of environmentally conscious practices spearheaded by his company that made the future look increasingly bright. From innovative resource recovery projects to wastewater and solid waste management, new technologies were enabling the company to surge forward in areas such as California in reducing our carbon footprint.

Recently we had the opportunity to speak with Anaergia’s western U.S. region Managing Director Yaniv Scherson about the company’s advances since. Yaniv joined the company four years ago as a process engineer. He has an impressive background in mechanical and environmental engineering, and at the time he joined Anaergia, he was at Stanford University as a Ph.D. student where he created a new wastewater treatment process.

“About one and a half years ago, I took the role of managing director, and since then, the region has developed, successfully financed, and started construction on the largest food waste digester facility in North America,” says Yaniv.

Anaergia is creating a bridge between the wastewater and solid waste – such as food waste –industries since most of our organic waste ends up in trash that goes to a landfill or as wastewater sludge. For the most part, its energy and nutrient value as fertilizer are not recovered.

The company puts equipment at waste hauler transfer stations and uses existing infrastructure at wastewater treatment plants to bring a very cost-effective and rapidly deployable solution. “We utilize the 156 wastewater plants in California that have anaerobic digesters. Our unique technology with specific California know-how and experience allows and enables us to bring solutions that are technically viable, proven, and cost-effective,” says Yaniv.

One new project is in the City of Toronto where an Anaergia technology facility processes and anaerobically digests food waste from the city. Meanwhile, on the West Coast of the U.S. at the Hale Avenue Resource Recovery Facility (HARRF), the company has a facility that generates renewable energy from biogas. “One is in the city of Escondido, in San Diego, and the other is in Northern California. We are taking food waste and or organics out of trash and bringing them to a wastewater plant to make biogas,” says Yaniv.

Biogas is a mixture of gases created by organic matter breaking down in the absence of oxygen. The combined heat and power (CHP) systems use digester gas from the wastewater treatment process to generate renewable electricity and heat for the facilities operations.

A new plant is being built in Rialto, California that will become the largest food waste digester facility in North America and possibly the world. The Rialto Bioenergy facility is trying to solve two major issues in Southern California: the need to divert of organics away from landfills and the requirement to produce renewable energy. The main contributor is food waste.

“It is a one thousand ton per day facility that is receiving seven hundred tons per day of food or organic waste that is currently in landfills supplied by Waste Management and Republic Services that are the two largest haulers in the country,” says Yaniv.

These organics are going to be converted into biogas that will be injecting renewable fuel into the gas pipeline to be used for both power generation and fuelling trucks. This is especially relevant due to a 2016 California law called SB 1383 that establishes emissions reduction targets and requires seventy-five percent of all organic waste to be diverted from landfill by 2025. This corresponds to about 200 million tons per year of organics and two hundred facilities that will be needed across the state.

The costs associated with building facilities are high with conventional technology, but Anaergia’s anaerobic digestion and solid waste processing technology brings solutions that are economical and take advantage of the existing infrastructure. “With these abilities, the solid waste community can have solid waste processing solutions that are competitive today and the ability to tap into either new or existing infrastructure,” says Yaniv.

The second problem tackled by the new facility concerns biosolids. Currently, biosolids are, for the most part, hauled out of state to Arizona or hundreds of miles away to facilities in Central California. This is done in an unsustainable manner, and Class B biosolids still contain pathogens and so have many restrictions placed on their use.

“It’s an unsustainable practice because of the long hauling and the potential for political discomfort. It is literally sludge from wastewater plants being dumped in the lands of other people,” says Yaniv.

With the seven hundred tons per day of biosolids received by the facility, Anaergia is using the waste heat produced at the site to dry these biosolids and produce a Class A biosolid. The Class-A designation indicates that pathogens have been eliminated, and now it can be used on agricultural land as a fertilizer. It captures the rich nutrient value in both food waste and biosolids, putting them back into the soil.

“Biogas is the only carbon negative fuel in existence according to the California Air Resource Board. The fuel we produce in the pipeline is sequestering and taking carbon dioxide out of the atmosphere, like planting trees. By doing this, there is a massive reduction in greenhouse gas emissions,” says Yaniv.

The facility will prevent the release of 220,000 metric tonnes of greenhouse gas emissions per year and will bring significant air quality and environmental benefits to the region that no other energy source can deliver. This is significant because California has a goal to be carbon neutral by 2045. This is not practical without biogas being a significant part of the solution.

The plant is currently under construction and about one-third completed, as of March 2019. For it to be successful, Anaergia needs to work with many groups because it is a huge problem that no one company can solve.

“The challenge is that we will need a portfolio of solutions that can manage different types of waste. But, ultimately, the real key to success is being able to rapidly deploy solutions that are cost effective. The most efficient method for this is to use wastewater plants,” says Yaniv.

Companies that can use wastewater infrastructure will be the ones that will be the most cost-efficient solutions. Their facilities are large, are permitted and already exist. Retrofitting a wastewater plant is cheaper and faster than erecting a new facility. Anaergia is the only company that has the technology solutions that create significant capacity with wastewater plants.

Anaergia is showing the world that sustainable practices can and will help with environmental initiatives. “We call it an end-to-end solution, by linking two of the largest industries by managing organic waste not currently linked and creating one so they can benefit from one another. There are synergies between the two that are realized through our technology offering,” says Yaniv.