Leading the Future of Urban Development 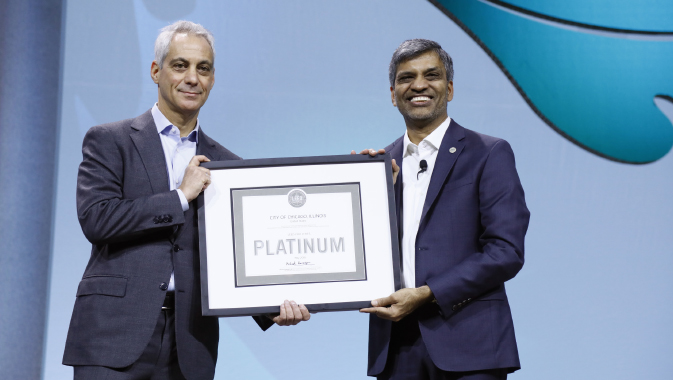 On a quest to create sustainable, smart and equitable cities around the world, the U.S. Green Building Council (USGBC) launched the LEED for Cities program in December 2016.
~
LEED, which stands for Leadership in Energy and Environmental Design, is an environmental rating system that has traditionally been used for buildings since the 1990s. Today, LEED is being applied to entire cities and communities as well, allowing them to measure and improve their performance and set a positive example for other parts of the country and the planet.

According to the USGBC website, “LEED for Cities helps you measure and communicate sustainability performance across an array of metrics. No matter what the size of your city, you can start using the technology – you can even begin by focusing on an eco-district, micro-grid or single neighborhood.”

As Dr. Vatsal Bhatt, Director of Cities and Communities at USGBC says, the benefits of using LEED are widespread and affect the day-to-day lives of those who live and work in those areas. “Conceptually speaking, LEED for Cities is touching upon various aspects of quality of life. For example, it looks into energy, water, waste, transportation, as well as quality of life issues such as education, health, equitability, and safety. What cities gain out of this is certification in where they are in the process, because we are looking into best practices, but at the same time we are also talking about performance,” he explains. “What are the outcomes? What are the results that you and I as common people see, touch, feel and experience every day?”

For instance, green building policies are intentions. From there, solar panel installations are actions. And healthier communities boasting higher standards of living are results. Being able to track a city’s current position in any given eco-parameter, compare it to others, and see where and how it can be improved is the first step in creating more dynamic cities for the 21st century.

Another benefit to certification that is not to be understated is the branding of LEED. Under LEED, cities are prepared to be competitive in the market when attracting the topmost talent, the most forward-thinking businesses, and the best financial opportunities.

“For example, Washington, DC was the first city to become LEED Platinum certified in August 2017, and they utilized this designation as one of their five main differentiators in their application for Amazon’s HQ2,” Dr. Bhatt mentions.

The nation’s capital was recognized by the USGBC for having 65 percent of its neighborhoods being walkable, boasting various routes that do not require a car (over half of residents do not take a car to work), and running every government building on 100 percent renewable energy, as mentioned in Architectural Digest. Amazon’s HQ2 is to be located in Arlington, Virginia – a DC-area county that is also LEED Platinum certified, under LEED for Communities.

The distinction is that LEED for Cities applies to megacities, cities, and towns, while the broader terminology of LEED for Communities is more applicable to counties, districts, and even individual neighborhoods that are making meaningful and progressive changes toward sustainable goals. For instance, Lake Placid, a village in New York State’s Adirondack Mountains known as a popular ski destination and former host of the Winter Olympics, is one such smaller community that is currently undertaking the process of certification under LEED for Communities.

Both cities and communities are tracking the same key parameters for certification, but each city or community is different, even from its neighbors. The USGBC recognizes that they all have their own priorities, and allows them to track from a list of 200 other parameters or create their own custom list based on their unique goals. This flexibility has allowed many cities and communities to start their sustainability journey.

In fact, in the short time since the program was launched, 91 cities and communities around the globe have now been certified under LEED, including major hubs around the U.S. such as Denver, Las Vegas, Phoenix, Chicago, and San Jose.

Because LEED is centered on continuous improvement, becoming a smart city is not something that is done overnight, nor is it a goal to be achieved once and put away. These green cities take a long time in improving their performance one day at a time. They set intentions and enact policies, which are then converted into projects. They continuously adopt incentives for green buildings, solar rooftops, wind energy, and improved transportation choices such as electric buses and bike lanes. They constantly strive to keep up with the latest technology to improve their performance every day, every month, every year.

But even with the best of intentions, these resilient and inclusive cities cannot track what they aren’t measuring. If your city is interested in LEED for Cities certification, city project teams must first register their cities in the Arc platform, complete the prerequisites, and provide data to receive a performance score in Arc.

Arc is a data measurement platform that was co-launched in December 2016 with LEED for Cities. The platform is a vehicle for certifying cities and communities, and is also used to certify or re-certify individual LEED buildings or show buildings where they rank so they can eventually work toward certification. Using Arc, everything a LEED city needs can be accessed online. The entire certification process is now e-friendly, convenient, and cost-effective.

Both those who strive toward LEED, and the LEED program itself are continuously improving. In April, the USGBC launched LEED version 4.1 for city, community, and residential projects.

As stated in a press release, LEED v4.1 expands on the earlier performance-based approach to deliver a comprehensive framework to support phases of planning, design, operation and performance management for new and existing cities and communities, in alignment with the UN Sustainable Development Goals. The new LEED version also incorporates leadership standards and best practices from complementary systems, like the previously integrated STAR Community Rating System, as well as the PEER, TRUE, EDGE and SITES programs. The STAR Community Rating System was merged with LEED in June of 2018, with the 75 STAR-certified cities and communities now undergoing LEED certification.

As we can see, many changes have taken place in the USGBC’s LEED program over the last couple of years, including the implementation of LEED for Cities and Communities, the data-driven Arc platform, the newest LEED version 4.1, and even LEED Zero for working toward developers’ net zero goals. Yet in a short amount of time, many cities and communities worldwide have begun pursuing LEED goals and adopting these metrics into their enhanced community plans. As the USGBC works toward green buildings for all within a generation through voluntary adoption of LEED standards in a way that works for individual cities, many more changes are to be expected in LEED’s future.

“I’m going to be very open here – LEED has been in operation for many years. We have such a great legacy, but LEED for Cities is a new program, and we recognize that we are the new kid on the block,” shares Dr. Bhatt. “However, we are very mindful of the kind of capabilities that we bring to the table. We’ve done a lot of background research to really understand other rating systems, what other programs cities are doing, and how we can complement them as well as differentiate ourselves from others.”

While LEED becomes a household name among developers across continents and seas, Dr. Bhatt acknowledges that the LEED for Cities stronghold is still firmly within the United States for the most part.

“We are working very hard to make a mark in Latin America, Eastern and Western Europe, India, China, other parts of Asia, and Africa. We are working on developing the best possible technical and complementary system available in the global market,” he concludes.

Any city or community around the world is encouraged to pursue LEED certification, which is in line with the United Nations’ goals for sustainability. Even for those who are uncertified, just tracking LEED’s key parameters can offer an aspiring city valuable information on where they stand next to other urban areas at a global level.

To find out more about how LEED certification can be a part of your city or community’s development plans, visit new.usgbc.org/leed-for-cities.