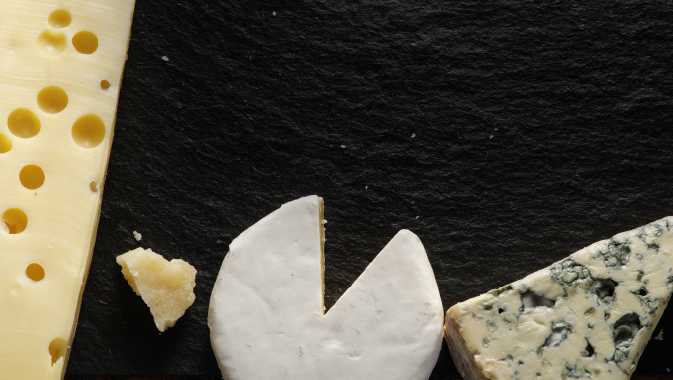 With a family history of cheese-making in Wisconsin – ‘America’s Dairyland’ – G & R Foods Inc., is the go-to source for retailers, food service providers, and food manufacturers that depend on quality, on-time delivery of cheese and other dairy products.
~
“My father, Jarold Glick, was involved in cheese-making all his life, and so was his father before him,” says Michael J Glick, president and chief executive officer of G & R Foods, Inc. in Reedsburg, Wisconsin. “There were plants in Wisconsin and North Carolina where we made cheese and yogurt, and the family and its partners owned one of the first whey dryers in the state of Wisconsin.

“When my father was born in 1942, his father was making cheese, mainly American style barrel cheddar and daisies, which are twenty-five-pound cheese wheels that were waxed either red or black. Later we made red rind Muenster, beer kase, cheddar daisies and barrel cheddar.”

Although the Glick family’s last cheese plant was sold in 1986 when Glick was still a teenager, he remembers going into the plant. “Today, I could still make cheese if I had to.”

Instead of continuing to manufacture cheese, Glick, his parents, and another partner applied their knowledge to a food trading company specializing in cheese and other dairy products. The company was formed in 1995 when Glick returned from Seattle University. Since 2009, when his mother became ill and the other partner left, he and his father have managed the business, which employs ten.

It is an intimate knowledge of cheese manufacturing and of dairy products that sets the firm apart from other traders. Others may have good business skills and know how to run a company, but lack the specialization that makes G & R Foods so good at connecting cheese suppliers to customers.

“We listen to what our customers want, and we know how to deliver it. We deliver to numerous countries and all across the U.S. Name a place, and we will send it,” Glick says, noting that some customers, which include national accounts, have been with the company for over twenty years.

The products include natural, processed, and Imitation cheeses in various forms including blocks, horns, and wheels; or sliced, diced, and shredded; in package sizes ranging from eight ounces to five-hundred-pound barrels. There are cultured products such as yogurt and cottage cheese. The company even carries canned cheeses which keep fresh without refrigeration and a variety of powders and proteins such as whey powder and rennet casein used by cheese manufacturers.

The range of cheese is almost an A to Z list of varieties, starting with an award-winning Asadero and ending with another award winner: Wisconsin Swiss. If there were cheeses starting with the letters X, Y, or Z, no doubt those would accompany the other twenty varieties the company lists including award-winning brick, cheddar, Colby, Monterey Jack, and Muenster.

Some varieties are available as certified Kosher, organic or free of artificial growth hormones that increase a cow’s milk production. In addition, special formulations can be provided for reduced fat, reduced sodium, extra sharp, and aged cheeses.

When Glick says G&R Foods will deliver what the customer wants, he means it. “Although we no longer manufacture cheese, if someone came to us and wanted a restricted-milk, processed cheese, for example, we would take that request to a manufacturer and have it made for specifically for them,” he explains.

“Three years ago,” Glick says, “we were approached by a group of farmers in Ireland that wanted to sell butter in the U.S., so what we did was develop a brand of Irish butter and cheese that is trademarked and then started to sell it.”

It arrives in bulk in the Port of Philadelphia and then is cut into sticks and sold as one pound quarters. “We also hand roll Irish butter which is packaged in a white freezer paper and sold under the Waterford Irish Dairy Products label or private label brands. It was doing really well in Wisconsin and Missouri, and then it was picked up by a company we do private label for, so it’s pretty much nationwide now,” he says.

He describes Irish butter “as rich in color with an awesome flavor because the cattle are grass-fed on average 300 days a year. People who are doing the keto diet want it, and the people that are drinking ‘Bulletproof’ coffee want it because of the high amount of CLA (conjugated linoleic acid) that is supposed to promote weight loss.”

Although Glick does not promote Irish butter as a health food, the CLA in it has been found to be a beneficial fatty acid that helps the body build muscle rather than store fat. CLA is also seen as beneficial in helping to prevent bone loss. Several nutritional studies point to grass-fed butter as containing more fat-soluble vitamins – A, D, E, and K2 – a better omega-3 to omega-6 ratio, and fewer toxins than grain-fed butter.

Now, “We’re looking to expand,” says Glick, “and we’d like to get into new markets, and at some point, we’d like to get back into manufacturing, but exactly when and what that will be is to be determined.”

What is certain, however, is that G & R Foods will continue doing what it does best, which is maintaining strong relationships with suppliers and clients. Describing his role as a trader, Glick says with self-deprecating humor, “We’re the middle man nobody likes.” That, however, is far from true. G & R is the company cheese manufacturers have been relying on since 1995 to either get the ingredients they need with no delays or get their finished product to market on time.