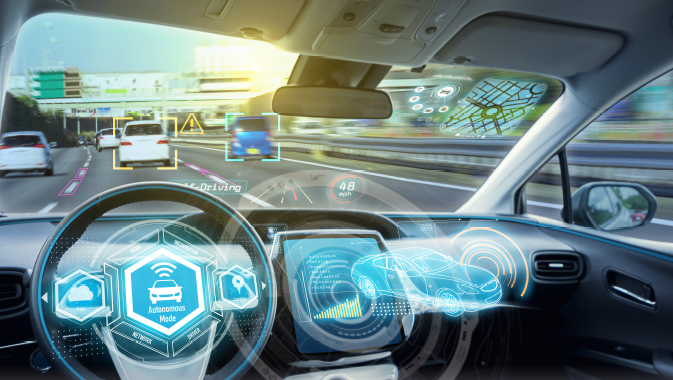 While there is no single hard and fast definition of self-driving cars, The Union of Concerned Scientists – a non-profit group founded by scientists and students at the famous Massachusetts Institute of Technology “to use the power of science to address global problems and improve people’s lives” – considers self-driving vehicles to be those where human drivers “are never required to take control to safely operate the vehicle.”
~
Call them self-driving cars, autonomous vehicles, or driverless cars, but the market for these futuristic vehicles is on the rise. In less than a decade, the notion of seeing cars and trucks driving themselves on our roads has gone from ‘not likely’ to ‘wow, it is really happening!’ To the general public, this seems incredible, but to industries investing countless millions of dollars into the self-driving vehicle market, this was inevitable.

Backed by technology industry juggernauts, engineering, innovation, development, and production of these vehicles is happening at breakneck speeds.

Self-driving vehicles are equipped with a combination of artificial intelligence (AI) software, RADAR, cameras, and an array of sensors, light detection and ranging (LiDAR), and internal maps for guidance.

As surprising as it may seem, the vision of cars driving themselves is not new; in fact, it goes back almost a century to 1926. On December 8th of that year, The Milwaukee Sentinel reported a driverless ‘phantom auto’ was going to “haunt the streets of Milwaukee” that day. Guided by radio control, the ‘ghost car’ was the brainchild of the Houdina Radio Control Co., a radio equipment company created by electrical engineer Francis P Houdina. The car was set to start its engine, steer itself through busy traffic, and possibly “‘sass’ the policeman at the corner.”

As time went on, numerous other trials of ‘ghost cars’ took place around the world. In the 1980s, successful trips were made automobile manufacturer Mercedes-Benz, Carnegie Mellon University’s Navlab, and others. Research has been spearheaded by the likes of Toyota, BMW, Audi, Nissan, Ford, General Motors, and others since the 2010s. The past five years, in particular, have seen the self-driving car industry make tremendous gains through Tesla Motors, Uber, Volvo, Delphi Automotive, and Google.

With technology industry leaders like IBM and Microsoft supporting the emerging driverless vehicles and the backing of dozens of automobile manufacturers, market confidence in the future of this technology is at an all-time high. Recent predictions from the likes of Zion Market Research, HTF Market Intelligence, and Grand View Research forecast staggering growth in the coming years.

Last year, Bloomberg reported that private, second-quarter investment in the sector exceed previous combined private investment for the prior four years. In short, billions of dollars worldwide are aggressively being pumped into the autonomous vehicle market, with no signs of slowing down over the coming decade.

Like any new product, the price of driverless vehicles will decrease as technology advances, and more players enter the market. Despite some reported setbacks, including an autonomous Uber striking and killing a pedestrian in Arizona last March during testing, confidence in the self-driving car industry grows. Many financial advice sites are stating that self-driving cars are coming and that anyone with interest in investing needs to pounce soon.

Another example of the faith in the future of driverless cars comes from the automakers themselves. Some, like the Ford Motor Company, have been around for well over one hundred years, but refuse to remain in the past. Ford reorganized its research and development of self-driving vehicles last year, drawing attention from investors, with some other rival long-time automobile makers left scrambling.

As the autonomous vehicle industry is expected to reach some $7 trillion by 2050, even the most esteemed manufacturers will have no choice but to embrace new technologies, or risk being left behind.

Mary. T. Barra, Chief Executive Officer of General Motors and the world’ first female CEO of a worldwide automaker, famously stated of the industry in 2015 that: “We’re going to see more change in the next five to ten years than we’ve seen in the last fifty.” Part of that change is going to be the evolution in self-driving vehicles. The automotive industry is going to be forming new and dynamic partnerships with other key players like Microsoft and LG Electronics.

South Korean LG Electronics – known for its televisions, appliances, mobile phones, and other devices – will be using Microsoft’s cloud computing system Azure and artificial intelligence to provide a technology platform to a still-unnamed premium German automaker. The system will include monitoring cameras and improved advanced driver assistance systems.

Not to be outdone, other car companies are embracing software and high-tech firms, with German multinational automotive maker Daimler AG recently announcing that its trucking division is purchasing the majority of Torc Robotics, the brainchild of a group of student engineers from Virginia Polytechnic Institute and State University – also known as Virginia Tech. Torc made three self-driving vehicles for the non-profit Association for Unmanned Vehicle Systems International (AUVSI) Intelligent Ground Vehicle Competition, and its unmanned technology is used by the United States Marine Corps, the U.S. Department of Defense, construction industry manufacturer Caterpillar Inc., and others.

Many of us already use alternatives to driving our own car or taking public transit like Uber or Lyft, so it makes sense that the next step in driverless vehicles will extend to taxi services. Waymo LLC was originally a Google project and is today a stand-alone subsidiary. Waymo announced earlier this year that 2019 would see self-driving ride services in Phoenix, Arizona.

Waymo has been aggressively testing its vehicles and systems in six states over the past decade. Its fleet of 25,000 self-driving vehicles has already completed over ten million miles of driving on public roads and another seven billion simulated miles.

With continuing research and projections of billions of dollar in investment in the coming years, there is no doubt that our drivers very shortly will be more machine than human.