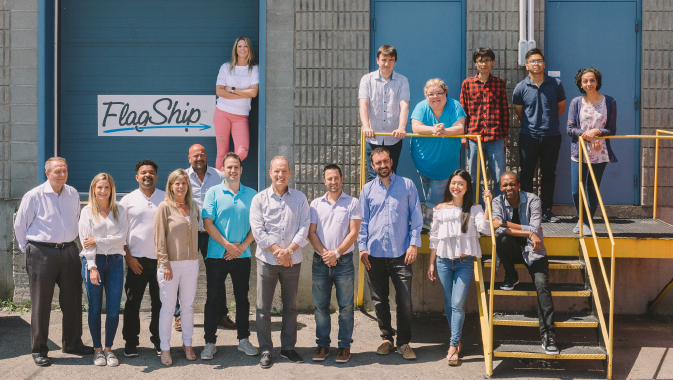 The dictionary defines the word “flagship” as the best, largest, or most important of a group of things such as products or stores, and if the people behind FlagShip — an authorized reseller of major Canadian courier services — have their way, the company will more than live up to its definition.

Before forming his current business, President Howard Kruger spent the better part of his career in the shipping industry, founding a Montreal messenger service in 1985, building it up locally for several years before adding on a transport end, mirroring its success in Toronto, and eventually creating a laneway between the two cities.

“I did that for 15 years, and that’s where I developed my relationships with couriers like Purolator for instance,” says Howard. “I sensed that I had reached my plateau when I had about 200 employees on the road; we did our own pickups and deliveries and I realized I wanted something greater. I wanted to understand the international side of the business to complement the domestic.”

Howard sold his company in 1999, and for the next few years he did something he’d never done before: he worked for someone else, a good friend who owned an International custom brokerage company.

“I told him I wanted to learn the ins and outs of that industry to understand how the international community worked, and I told him this was a short-term stop for me. I had an idea percolating that would then require me to go back into business for myself and open up something that would help modify the courier and transport industry.”

While travelling in the States in the early 2000s, Howard met someone building a prototype for the U.S. market, using technology instead of labour to bridge the gap between the supply chain, from the couriers to the end users.

“I was very intrigued by this technology just coming to forefront,” he says. “I’m not a technological person at all, but I do have an entrepreneurial brain, and this was something interesting because Canada usually follows the U.S. – and I said if it’s in the U.S. and it’s not in Canada, I wanted to be one of the first.”

Howard continued to investigate different avenues and possibilities, and in 2004 he left his friend’s business after having forged important relationships with the couriers themselves – and just as the technology was starting to emerge in the transport/courier industry. “There are many thousands of small clients that are very costly for the couriers to service I suspected. I wanted to build something where I would be taking all these small clients off their hands so they can focus on one point of contact— FlagShip — and we would be their point of concern,” he says. “We would take potentially thousands of clients’ issues out of their phone system and handle all the customer service ourselves, whether it’s delivery or invoicing issues, as these could be tremendously taxing problems on couriers. I needed this to be a win-win situation.”

It took six months to get couriers in line while Howard outsourced to get the right technology framework in place. Next came the company name. “I give credit to my wife for naming the business in 2005,” he says. “FlagShip gives us a lot of leverage, because it means a lot of different things, a flagship store or flagship idea. That name is at the forefront and that was important.”

FlagShip grew so rapidly within its first year of operation that it required a larger company to help with technology – and then outgrew that company as well. That’s when Howard made the strategic decision, along with his two sons, now both Vice Presidents, to bring the technology in house.

“My whole life I’ve seen him grow within the industry and I’ve seen the industry change a whole lot over that time of 30 years,” says Josh Kruger, who was with his father on day one. “I was sitting there with him in the office – just me, him and one customer – and where we’ve grown from 2005 to now has been an unbelievable ride to see.”

“My brother and I didn’t get rushed into our positions,” David says. “We learned the business from the ground up, and now I’m able to bring the company into the direction we’re going. The great growth we’re having is amazing to see, and I’m just looking forward to the upcoming years — we have a lot of exciting developments coming down the line that will keep us growing and keep the name FlagShip strong in the marketplace.”

“Adopted son” Patrick Leblanc, Director of Technology, was brought on board when Howard realized the company needed some serious, in-house technological support. “I knew right away at the time that this was an industry with a ‘technology first’ component,” says Patrick. “We talked about the possibility of me joining the company and they understood that becoming a tech company would allow FlagShip to gain a very strong advantage against the competition. That’s what allows us to be extremely efficient and offer a superior service to our customers.”

The heart of FlagShip, says Howard, is that it’s not a courier, but the go-between, an authorized re-seller of Purolator, UPS, FedEx, Canpar and DHL, five couriers of choice offered to customers. When clients sign up on the website and enter the parameters for a shipment, a menu of courier choices for that delivery outlines services and prices, along with labels to print for packages. Once the client selects the courier of choice, the courier comes to pick up the package and handles the delivery from start to finish.

FlagShip also has a dedicated LTL (Less Than Truckload) division, for when clients need to ship something like a skidded freight, larger than what a courier handles. “We can actually handle anything from an envelope up to a skid of freight no matter where it’s going to,” says Howard.

The company also offers several plugins for platforms like Shopify, allowing clients to go directly to FlagShip to show their own rates to customers, who then have an easy link between their e-store and FlagShip.

“E-commerce is the next big thing here in Canada,” says Patrick. “Everyone wants an e-store and everyone wants to sell online. We’re very aware of that, and have been in the past few years building connection points to plug in to those systems. We’re very focused on helping our customers, because it’s not easy to start an e-store. A lot of customers have questions and concerns, and we see an opportunity to help them build and solidify the relationship with FlagShip for shipping goods online.”

“Because of the volume we supply, the couriers give us very good discounts which we then pass on to the clients,” explains Howard. “These small clients enjoy good discount rates, but most important to us – more than the rates – is that FlagShip isn’t strictly rate-conscious; we’re very, very strong in customer service. To us, that’s our first focal point. When a client needs us for issues, our staff helps them right at the point of the phone call, way quicker than they could have done on their own.”

Howard’s emphasis also focuses on a win-win for the courier themselves, and he understands both the marketplace and the clientele.

“We’re not interested in stepping on the couriers’ toes,” he says. “We want to be a complement to these couriers. We want to be an extension of their services to the end users, these small clients. We’re not interested in going after a market that belongs to the couriers themselves. We stay within our own sandbox, we understand that there’s enough business out there that keeps our sales force busy.”

As for the future of the business, the Kruger family is dedicated to maintaining high quality, encouraging growth and continuing to explore technological advancement. “My brother and I have learned a lot through the industry and the company and the way a business runs from what our father has taught us,” says Josh. “We’re very confident in ourselves and Howard is confident in us that we’re able to take FlagShip to the next generation, hopefully over the next 20 years.”

The family has plenty of ideas about how to do that, and while the industry itself is not a “sexy one,” it’s one that’s absolutely necessary, and one that they feel very strongly in continuing to build, for themselves and for the customers. “We’ve always taken great pride in our customer service and it’s something that really separates us from our competition,” says David. “There are other re-sellers out there, and they have great discounts with the couriers, but the reason why companies come back to us is service.”

It’s that pride, commitment and passion that the Kruger family is most proud of when they talk about what FlagShip has accomplished, and what lies ahead.

“I’m happy and proud about FlagShip because we’re not a company that rests on our laurels,” says Josh. “We don’t take any success or growth for granted. We want to continue growing our company, and we’re always coming up with different innovations and programs to continue growth into the future. We’re not a company that takes our foot off the gas pedal – we always have our foot down and want to grow as much as we can.”