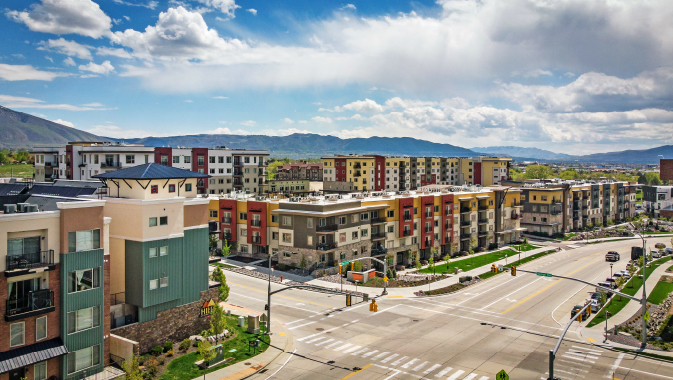 Sandy, Utah is a city of nearly 100,000 residents located within the Salt Lake City metropolitan area. In 2012, Sandy’s municipal government released the first draft of a twenty-five-year plan to turn the city’s downtown core into a modern, walkable, transit-oriented city center, known as ‘The Cairns.’ This project emphasizes sustainability and has a strong focus on pedestrian-friendly, environmentally conscious design principles.

The plan aims to reposition and develop Sandy’s 1.100 acre downtown core into a collection of urban villages designed to be a home for commercial businesses, civic activity, a variety of residential accommodations, and recreational amenities. Utah is home to many beautiful mountain towns, but the Cairns project aims to make Sandy into a mountain city.

According to the project’s master plan, a vital design element will be a ‘mountain meets urban’ aesthetic. Located at the foot of the Wasatch Mountain Range, Sandy City and its residents are deeply connected to the mountain. It has shaped the region, its history, and its culture for as long as people have lived there. By marrying the design of the Cairns district to the mountain and the natural landscape, Sandy hopes to display the connection between the people and the area.

To capture this in the architecture of the district, six key design elements have been selected: peak, valley, forest, meadow, stone, and water. To complement the peaks of the great Wasatch mountains, buildings in the Cairns district will be composed of undulating heights, stepped back as they rise from the street. Valleys will be represented by outdoor rooms and patios with buildings surrounding them. The beautiful mountain forests will be mirrored within the Cairns by green spaces, groves, and canopies that will provide shade for pedestrians. Gardens and plazas of bright colors will represent meadows. Finally, stones and water will be defining features, built into the urban landscape throughout the district.

With 1,200 acres of open space, two hundred miles of woodland trails, beautiful mountain vistas, and a friendly community, the Cairns will only add to the wonderful place that Sandy City has always been. “You can do everything here. When you ask the residents what they like about Sandy, the number one thing is that it’s safe. People love their neighborhoods. They love living here, and there’s camaraderie.”

Part of this camaraderie sees the city pull together to remember the heartbreak of 9/11. “We have a big parkway between us and the Shops at South Town. Right now, there are over 3,500 eight-foot-tall flags out there to represent each fallen person from the 9/11 tragedy. This is our seventeenth year of doing that,” says Sandy City Director of Business and Economic Development Nick Duerksen.

The development aims to meet the growing desire among Sandy residents to live closer to mixed-use centers. Surveys taken during the early development of the project found that seventy-seven percent of Sandy residents would prefer to live closer to work, shopping centers, and recreational amenities. For decades, the trend has been to move residential developments into suburban neighborhoods, which tend to drift further and further from city centers, but that seems to be undergoing a reversal.

According to Sandy’s research, one of the main reasons that its residents and Utahns, in general, are interested in living closer to city centers is a desire to reduce traffic congestion and to improve their ability to get around without driving. As a result, the Cairns master plan has put a great deal of emphasis on public transportation, walkability, and bicycle access.

Three public transport stations are already in place within the district. One station for the FrontRunner commuter rail system is on the west side, and two stations for the TRAX light rail system are situated on the east side. Routes throughout the district will be designed to carry traffic between the many urban villages that will make up The Cairns.

Central to the design of the Cairns is the segmentation of the 1,100-acre property into unique community spaces that the developers are calling urban villages. Public transportation routes, bicycle lanes, and pedestrian walkways will connect these villages throughout the district, enabling an interconnected, walkable city center. Currently, three villages are under development, while others are in the planning phase.

The East Village has been designed around access to public transportation. Residential and commercial allotments will travel throughout and connect to the existing TRAX station. Several new developments in this district are currently underway, including new office buildings, housing, and retail locations. Finally, the largest of these three sub-districts is the South Village.

The South Village is home to several major developments. The Shops at South Town is the city’s largest shopping center, combining retail locations, restaurants, and other amenities. MidiCi, The Neapolitan Pizza Company, recently opened its first location in Utah in the South Village, and it is not alone.

“There are more new restaurants coming, and brewpubs that will be coming this fall. There will be more renovations, new tenanting, some construction, and some rebuilding of the mall itself. It’s a phased project, and it will take some time. They’re working on bringing in additional retailers but also some new experiences, including entertainment and recreation,” says Duerksen.

Another landmark of the South Village is the Hale Centre Theatre, a facility with an unparalleled quality that draws many visitors to the area. “We did the bond for the theatre based on an attendance of 278,000 people a year. We thought if we hit a home run, we’d see 400,000 to 450,000 people. We just got the numbers, and last year we had 569,000 people. There’s no performing arts theatre like it in the country,” says Duerksen.

The Cairns master plan will develop the area surrounding the theatre with plazas, open spaces, offices, and residences, all organized in a dense configuration to complement the artistic vision for the area.

Another significant development in this region is the Summit. This $500 million project has just completed the initial design phase and entered the contractual phase. Ground-breaking is expected to happen this coming spring. This multi-use property, featuring two office buildings, a hotel and glassed retail space that will connect the hotel and the office buildings, will be the most iconic landmark in the entire Cairns district. One of these will be a twenty-two-story high rise, the tallest building in the region. The development will also include a parking garage, residences, and restaurants.

The East and South Villages are under development currently, but other villages are also being planned. “We just completed a Stadium Village master plan in June, around the Rio Tinto Stadium. The city owns ten acres within that area that just went out to a request for proposal a month ago. We’ll be closing on that in the end of October. We’ll be selecting developers in early December,” says Duerksen.

A historic schoolhouse built in the 1930s has recently taken on a new role in Sandy. For over a decade, the building was vacant, but now, a ShakeShack opened in the space. The restaurant opened to immediate success with a six-hour wait to get in on the first day.

Multinational corporations have taken notice of the investment and progress that the city of Sandy is making in its development. American Express, Avidxchange, NICE inContact and Cornerstone onDemand have each moved corporate headquarters to the region. All of this activity is putting Sandy City on the map.

Even before this development, Sandy, Utah has always been a beautiful place to live. “We have a great quality of life here. We have great neighborhoods, great residents, and it’s always rated as one of the safest places to live in the country. People love it here. The recreation opportunities, the Canyons School District is one of the best education systems in Utah, and we’re right in the heart of two large university campuses, Brigham Young University and the University of Utah,” explains Duerksen.

The Cairns project aims to make Sandy the most stunning mountain city in the State of Utah by connecting the people to the natural landscape through architecture and design principles inspired by beautiful Utah mountain ranges.