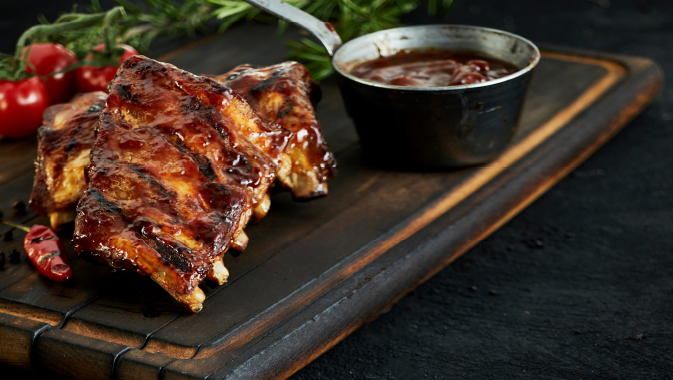 South Carolina’s Spartanburg Meat Processing Company – working with beef, pork and chicken – is fanatical about freshness and quality. For instance, products are made only to order, and to the customer’s specifications. With this approach, nothing ever sits around on a shelf.

Established in 1999, Spartanburg Meat, a USDA-inspected plant, has become well known for its fall-off-the-bone, fully cooked, pork baby back ribs. The research and development team works with customers to help create custom recipes and packaging based on the desired flavor profile. A good portion of the business is co-packing private-label products for other companies. The size of the packaging varies from single servings to bulk packs. Spartanburg Meat also services restaurants, deli departments, and grocery stores.

Spartanburg has a plan in motion to further develop the TGI Fridays brand and it includes some products that will be suitable for the freezer.

Expanding the line
“We’re developing line extensions under the TGI Fridays brand to be able to offer more products. We’ve got some items that are going to be available for the freezer section, and then we’ve got a couple of fully-cooked items that will be available for the meat counter. And also a line of dips that will be for the deli department, all under TGI Fridays brand,” explains JoAnne LaBounty, President and CEO of Spartanburg Meat.

Spartanburg Meat had five partners when it was founded in 1999, and its first success was in the chain restaurant industry. In the unfortunate aftermath of September 11th, the company was forced to make some hard decisions because many of the chain restaurants it had been servicing went out of business. “We had to decide whether we were going to lay people off and go back to being smaller – or what we were going to do – and we decided to go into the retail products,” explains LaBounty.

After the decision to diversify was made, and the company applied for an SBA loan, three of the partners chose to resign their shares rather than put up personal guarantees. JoAnne LaBounty bought out her last remaining partner in 2002, and Spartanburg Meat became a fully woman-owned business.

Located in Spartanburg, South Carolina, the company has expanded the premises three times since purchasing the building. Most recently, 40 by 60 square feet of office space was added to free up more space in the processing plant, and the company is planning another 15,000 square-foot expansion in 2020.

The business is slightly seasonal because grilling is more popular in the summertime. Throughout the year there’s an average of 80 employees. Roughly 30 of these have been with the company for over five years. “We’ve got a good core group of people. My son is my general manager, and I’m very fortunate for that – he’s been here for 18 years. My daughter does our accounting and she’s been here from the beginning, since 1999. You might say we’re a family-run company, and it makes things a lot easier when you don’t have to worry about your key management people,” says LaBounty.

Last year, Spartanburg Meat calculated its territory coverage and discovered that its products are present in 30,000 grocery stores across the United States. The company also takes pride in its exports to Canada, Mexico, Korea, Japan, and South America.

The private label co-packing services offered by Spartanburg Meat are delivered with custom product solutions. Meat products can be flavored or marinated and cooked in numerous ways and the research and development team puts its expertise at the service of private label clients so they get the bespoke products they really want.

Co-packing and cooperation
Unlike many companies in its position, Spartanburg is open to building networking relationships with others in the meat industry. This is something that most large brands would never consider offering since it would only create competition for them. Nevertheless, Spartanburg Meat is happy with the niche it has found in co-packing.

When it first began providing co-pack services, Spartanburg Meat would have to track down companies that could benefit and convince them of the value it could offer. Today, it has gained a reputation in the industry, and companies seek out Spartanburg Meat for its quality service. Add to that the general high regard for the company’s strong ethical culture, its belief in honesty and integrity.

The current challenges facing this woman-owned company are very different from those in the past. “When we first started, it was so very much a male-dominated industry and that was really a challenge. They didn’t really look at us as being a viable source because we were woman-owned,” says LaBounty. “I think that we’ve overcome that.”

Keeping up with the inventory
The issue for Spartanburg today is staffing and funding. It is difficult to find a bank willing to finance a business that requires so large an inventory and the volume of meat processed by Spartanburg Meat demands plenty. It carries approximately four-million dollars’ worth of raw meat products at any one time.

And the labor shortage in the United States has certainly affected Spartanburg Meat. Working in a meat processing plant is hardly considered a glamour job, and there are some large manufacturing companies in the area competing for the employees.

As a smaller company with one location, Spartanburg Meat does not have the high overhead costs that some of the bigger meat-processing companies may have. This allows it to reduce costs and focus on the quality of its products. “Our margins are able to be a little bit tighter and so we’ve got very good pricing and very good quality, and that seems to be keeping us as a competitor to all the big players that are out there,” says LaBounty.

Food for our fighters
Spartanburg Meat is proud to sell its quality meat products to the United States Armed Forces. “We supplied a number of items to the forces while we were in Iraq, and we’re still supplying products to the military for our troops in the Middle East. Even though we are not at war, they still have to eat, and that’s a good part of our business,” says LaBounty. The company also sells to Federal and State prisons.

Community involvement looms large in the culture at Spartanburg Meat, and as a meat processing company, it seems fitting for it to support the hungry and homeless. It consistently donates to the shelters and churches that feed the homeless in the area and has an ongoing relationship with the Salvation Army. Since its products are only made to order and it doesn’t hold an inventory of packaged products, charities get the benefit of any excess products that might result from production overrun.

Another example of the company’s good-hearted attitude was when Hurricane Katrina landed in the United States. Spartanburg Meat donated $50,000 worth of products to feed people made homeless by the hurricane who were being housed in a football stadium in Atlanta.

LaBounty is a member of various boards locally through which she applies her efforts to give back to South Carolina. She is on the USC Upstate Foundation Board of Directors and focuses on inspiring and educating college students with regard to agriculture. And with the intention of giving back to local businesses, LaBounty is a member of the Small Business Administration (SBA) Advisory Board for South Carolina. Spartanburg Meat is also planning to establish an intern program beginning in 2020.

Committed to quality
For the present, with its emphasis on quality and integrity, Spartanburg Meat is highly committed to its own high standards, day by day, and to exceeding the industry standards set by the USDA.

For the future, the company plans further development of the great potential of its in-house TGI Fridays brand, and will continue to offer its made-to-order co-packing private label services.

Despite its status, in a largely male-dominated business, as one of the few meat processing companies in the United States led by a woman, this woman-owned company has built a countrywide name for itself in the last twenty years.

Spartanburg Meat has secured its reputation as a trusted source for meat across the nation and abroad.