Trendsetters in the Ice Fishing Industry 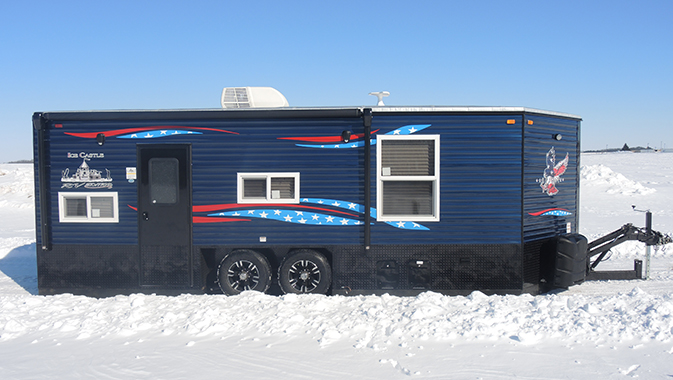 A fish house provides shelter to those who venture out onto frozen lakes to cut holes in the ice and fish in the dead of winter, and there is no better place to manufacture and sell ice houses than Minnesota, nicknamed the ‘Land Of 10,000 Lakes’ (though in truth, there are 11,842).

Minnesota endures a long, cold winter that easily produces three feet of ice on its lakes, making this the perfect market for American Surplus & Manufacturing (AS&M), better known as Ice Castle Fish Houses, the largest producer of ice fishing shelters in the world.

If you are in Minnesota and step out onto a lake in the winter, you will see an Ice Castle. Some lakes have hundreds of units dotting the area. However, these fish houses are not the rudimentary shelters of the past; they are towed like any camping trailer, but once on the ice the differences become clear, as the fish house can then be lowered to the ice surface and has hatches in the floor to access the ice, allowing comfortable fishing.

We spoke with Brett Drexler, President of Ice Castle Fish Houses. And it seems the ever-expanding business that Brett’s father Jeffrey Drexler started twenty years ago all began with a request to build a moveable ice hut – and the rest is history.

The first house was built in 1997 in a small shop in Montevideo, Minnesota where the current headquarters sit. Brett’s father used to work at mobile home manufacturing plant Friendship Homes and would do his regular work there during the day before transitioning to fish houses in the evening.

“My father used to build storage sheds before delivering them to various places around Minnesota. One day his sales manager asked him to try building a fish house, so he gathered some people in the know and got a frame. They used to crank out frames that went lowest to the ground, designed one up, delivered it, and sold it instantly. This is how Ice Castle was born,” says Brett.

Eventually, Brett’s father quit his day job to concentrate on Ice Castle Fish Houses full-time. Only four hundred units per year were made in the early years, but it just kept growing. The average yearly output now is three thousand units sold by thirty-two dealers worldwide. Since its inception in 1997, it has manufactured over 25,000 ice castles in forty-three models.

No business begins without its struggles and Jeffrey was doing a lot of the work on his own. He would order all the materials, take the houses to customers, and perform all the pricing. Unfortunately, he lost track of the market price increases, so profits went down.

He was going backwards, and that was when he decided to start hiring people to help. He started with a purchasing agent from his former employer and that person is still with the company to this day. More systems were developed that would ensure that Jeffrey would never have to deal with that same situation again.

“My father was self-taught and does not possess a college education. He was a self-professed D student in high school, so blood, sweat, and tears got him to where he is today. He spent many hours on the business battlefield. It is very motivating to have a father figure do that as an example,” says Brett.

Brett explains he and his father were not much for going out on fishing or hunting trips, but he feels blessed to have had the opportunity to work with his father every day. He recognizes that not a lot of people can claim that they work side by side with their “old man.”

Jeffrey still works but is much less involved these days. He is, however, an integral part of closing deals and selling products and has maintained great relationships with all the dealers around the globe. Ice Castle Fish Houses has, for the most part, been with the same dealers since 1997.

The company presently has 160 employees. “As the company produced more buildings, new people needed to be hired to keep up with demand. For every foot of concrete, you must hire another employee,” says Brett.

The competition in this market is also growing. There are currently at least twelve manufacturers in the state of Minnesota, but Ice Castle Fish Houses has been the example to follow. Competition may be becoming an issue, but it also propels the company forward.

“When other people saw the potential through our success, they decided to make a go of it. When we started, there were practically none. A few guys were operating side businesses, such as carpenters laid off in the winter that would build a few, but not have an actual corporation like Ice Castle does,” says Brett.

“We see what they are doing and try to stay a step ahead, but competition is a healthy thing because it spurs you on. You look at yourself in the mirror and decide what you are doing wrong or right,” says Brett.

The trailer maker has received various awards, and the charitable work also does not go unnoticed. “American Heroes has given us awards for our work with veterans. We put together fish houses for them so veterans can fish and get outdoors. They are wounded warriors or those dealing with PTSD,” says Brett.

Every year, Ice Castle has donated over $1 million to various charities such as the Make a Wish Foundation, and this is all made possible through the success of the business.

The product line starts with a basic insulated fish house that is 6 ½ by 8 feet. At the other end of the spectrum is the 8-by-34-foot model, which is fully loaded with fiberglass sidings, foam insulation, full showers, toilets, and water heaters. Though large, it too can go out on the ice.

“We get three feet of ice here during the winter months, but a lot of people also use our ice castles as a camper in the summer. Our most popular model is the 8-by-21-footer. It is not the biggest, but not the smallest. It falls within the category of mid-size unit. We can do a full RV package with that one,” says Brett.

Ice Castle Fish Houses has built many fishing trailers, and customization is not something from which it shies away, with a huge choice of sizes, floor plans, and features. One customized house was built to look like a caboose with living quarters where the owners can enjoy fishing during the day and sleeping overnight.

Brett and his wife built one that was ten feet wide and thirty feet long. This unit is what is known as a ‘park model’ and does not go on the ice. Park models can be moved like an RV, but are designed to be parked somewhere for long periods, often with a skirting attached so that it looks like it belongs on the site like a cabin.

Another request entailed ten-foot walls, with the whole of the upstairs acting as a loft and the downstairs set up as living quarters with a bathroom and toilet. It resembles a park model RV, yet can be taken onto the ice and drops to the surface like its other ice fishing houses.

A new venture is underway, as Ice Castle Fish Houses will be manufacturing two houseboat units, and later in 2020, park models will be added. The two houseboats will go on a bay in the Illinois River. People can either buy them outright and have their own area in the marina or they can just rent them.

Ice Castle is constantly putting out new models and looking at various possibilities. There seems to be no end to what can be accomplished, and the units can be shipped anywhere within the U.S.

“On Christmas day, we will be delivering a house to Tennessee. We will also be meeting up with another dealer that is bringing one to Florida, so we are moving into different territories. As time marches on, we hope that this new venture will take up half of our production efforts. If that means we need another manufacturing building or even decide to open a new location, that is what we will do,” says Brett.