A 21st-Century Grid – Renewable Energy on a Massive Scale 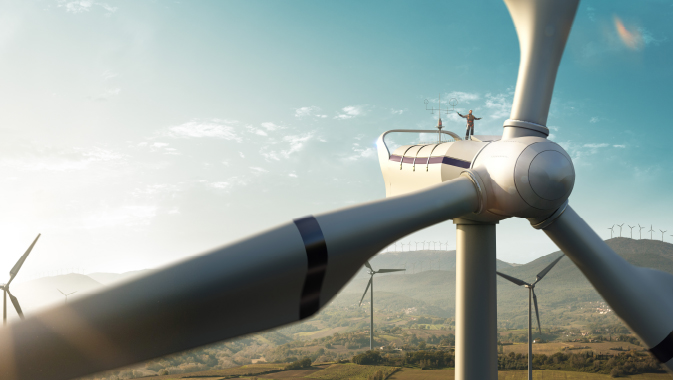 As Canada continues its ambitious goal to become carbon neutral, the drive for sustainable and renewable energy sources has rapidly shifted from pipe dream to national priority. Borea Construction, Canada’s largest renewables constructor, is working to blaze a trail of colossal projects across North America.

Borea, named for Boreas, the Greek god of the north wind, began as a joint venture between US-based Blattner Energy and Quebec-founded Pomerleau. Blattner, headquartered in Minnesota, built roads and highways across the United States before reorienting itself into a renewable energy provider in 1997. Today, the company is the top solar contractor in the U.S., according to Solar Power World Magazine’s annual ‘Top Solar Contractors’ list and, to date, has delivered over four hundred projects across North America. Pomerleau, the other half of Borea’s equation, has built over two thousand projects across Canada.

The two companies originally pooled their resources back in 2006, but Pomerleau formally purchased all assets to make Borea a wholly-owned subsidiary just last year. As the two companies have a wealth of experience in construction, Vice President of Communications and Branding Debby Cordeiro says that this was a natural decision. “It was really a desire to build on that experience in the construction field, apply it to renewable energy, and build it from that,” she says.

Slightly over one year after this acquisition, Borea has over 150 professionals, with an estimated five hundred subcontractors and staff working on projects across Canada. More than sixty-five projects, representing over 5500MW, are either completed or ongoing, demonstrating its skill and efficiency. Naturally, Borea’s initial projects and expertise began in the east. Yet recently, the renewable energy market has seen a dramatic shift to the west, where there is an impending moratorium on coal-fired energy generation, creating a demand for new, cost-effective energy generation. For this reason, Borea now sees 75 percent of its work in Alberta and Saskatchewan.

This experience and ability to provide turnkey service set Borea apart from its competitors. “Building on that expertise, we’re able to add value from the very onset of a project all the way through to its realization.” The company builds efficient, cost-effective solar and wind plants guaranteed to produce clean energy in a short period. It continues to work with private companies both large and small to provide both solar and wind power to communities across Canada.

In one of Borea’s most recent and ambitious projects, the company is partnering with Hydro-Québec, the province’s main utility provider, to build two solar plants just outside Montreal. These plants will be Hydro Quebec’s first solar plants and a welcome expansion for the utility.

La Citière Project, located in La Prairie, and IREQ Project, located in Varennes, will add over 30,000 photovoltaic panels to Montreal’s electrical grid when completed in autumn 2020. “When all of this is said and done, we’re creating the capacity to power over a thousand residential homes,” Cordeiro remarks.

A project of this magnitude is also a prime platform to display the company’s professionalism. “This project will have a significant impact on the development of Quebec’s expertise in photovoltaic power generation, and we are very pleased to be part of it,” says Murray Westerberg, Director, Western Canada.

Borea is closely communicating with Hydro-Québec on all aspects of the project from resource allocation to personnel management. A specially-appointed leadership team ensures that the companies’ values are aligned. “It’s the basics. It’s relationship-building. It’s communications. It’s making sure that we’re building a team that will gel well with the client,” Cordeiro explains.

Cordeiro and her colleagues hope this project will prove the viability of large-scale renewables and their ability to provide power, thereby overcoming one of the industry’s impediments. In Alberta, for instance, a recent request for proposals found that solar energy is now available at $0.048 per kilowatt, with wind energy also available at an even cheaper $0.039 per kilowatt. In contrast to gas or nuclear plants, which require long construction periods, renewable energy is also faster to build. “A 200-megawatt wind project or a 50-megawatt solar facility can be constructed, commissioned, and providing energy to the grid within one calendar year,” Westerberg says.

Borea’s staff and clients recognize time is not a luxury. “We know how much pressure our current energy system in Canada is under, and this is a worldwide trend,” Cordeiro says. “It’s a combination of the technology being mature enough and cost-effective enough to make sense.”

Borea’s clients across Canada recognize the international drive, particularly among younger generations, for a switch to renewable energy for primary power sources, and this drive is making many younger professionals flock to the company. This is also seen as a stable, long-term employer, something that potential employees find attractive in a volatile world. “If you join the family, we will help you develop your career,” Cordeiro says of the company’s recruiting strategy.

To this end, it invests heavily in training and professional development, including a large training centre in Quebec City, known as PX3. For health reasons, the facility is working online at the moment to provide continual professional development for Borea employees, both new and experienced. The company employs both recent graduates and highly-experienced construction professionals looking to apply their expertise to the renewables sector. It also works with universities across Canada to recruit the nation’s best and brightest.

Many workers are attracted to working in an industry dedicated to improving our planet. “This is something that we feel really resonates with young workers, who are really looking for employers with a purpose and employers that will give them the tools that will help them grow and develop,” Cordeiro observes.

Despite these recruiting measures, Borea still faces the challenge of a worker shortage. “That was true pre-COVID, and it’s true today as well,” she says. She cites the company’s work in Saskatchewan’s ongoing Blue Hill wind farm project, which will require over two hundred workers over two-years, as an example of the need for skilled workers. To fill worksites, the company is engaging in workforce development and culture enrichment to recruit and retain Canada’s future workforce.

“Internally, we spend a lot of time designing programs, designing initiatives, engaging with our employees, and creating a culture that’s innovative, that’s rewarding, and where we’re really focusing on people’s potential for development and growth,” she says. “To deliver solid and quality projects, we need solid and quality talent, and one cannot happen without the other. We’re just taking one project and one successful onboarding of an employee at a time.”

“We see some great opportunities to elevate the way energy is produced in our current market,” Cordeiro says. “As more and more research and research dollars are invested into the potential of renewable energy worldwide, I think we will see other elements emerge, but right now, we’re really remaining focused on solar and wind.”

Naturally, the company is moving forward cautiously in a COVID-affected world. “We’re taking it one thing at a time,” she confirms. “Delivering a quality project is important.”

Borea is fully committed to switching Canada to renewable energy. “Renewable energy is now the cheaper source of new electricity,” Westerberg says. “The demand will continue to grow because we are green and cost-efficient.”