Tourism for a Changed World 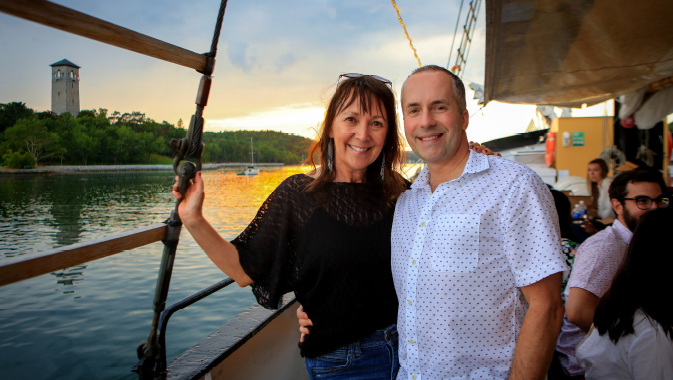 Perhaps no industry has borne the brunt of COVID-19 more than hospitality and tourism. In a socially distanced world, tourism providers across North America are reinventing themselves to present a new type of business to an equally new type of customer. Halifax’s Ambassatours Gray Line has reoriented and consolidated its business practice to offer more affordable tours while expanding to capitalize on growing area opportunities.

Ambassatours has demonstrated an uncanny knack for adapting to customer trends over its thirty-plus year tenure in Halifax and greater Atlantic Canada, as we found when we spoke with Chief Executive Officer Dennis Campbell in September 2019. Over a year later, the company has been forced to reinvent itself to accommodate smaller markets.

The company has experienced an estimated $16 million in lost revenue from cruise ship passengers alone, and Campbell laments not being able to hire over three hundred seasonal staff. “That was tough for sure because these are wonderful people. They do wonderful work for us, and they create magical experiences for our guests,” he says. “To not be able to hire them is tough.”

Despite an unprecedentedly low season in summer 2020, the company was diversified enough to avoid bankruptcy. Varied collateral and potential revenue streams helped Campbell and his staff work out a plan to keep the company solvent under different scenarios. He expresses relief at having weathered the storm; however, he and his colleagues also know that COVID will be an unfortunate fact of life for the foreseeable future, and Ambassatours must be prepared.

“We believe that tourism recovery is likely to be a three-year recovery and could be three to five years,” he says. “We have to look and say ‘what do we have to do to make sure we’re around long-term?’”

Campbell freely admits the company has made deep sacrifices to remain afloat, selling many of its watercraft and amphibious ‘Harbour Hopper’ trucks, several tour buses. It has even auctioned local icon Theodore Tugboat, mascot of the eponymous nineties children’s TV show. The hometown hero will continue its operations for the company until this winter.

But now, Ambassatours is reinvesting in its core fleet as well as in new technology. The company is one of several investors in Canada’s first electric passenger ship, which promises to provide environmentally-friendly operations and can store power during excess production. As touring vessels sit dockside roughly eight months of the year, excess power from Halifax’s power grid can be transferred to large-scale batteries close to home.

This investment, if proved sound, could open the door to a fleet of electric watercraft. “If they all were largely hybrid-electric, they would be massive battery storage,” he notes, confirming this is only the first stage of a long-term investment.

Ambassatours is also refocusing its efforts from cruise ship passengers to locals. As Canada’s major Atlantic port, Halifax has been a major cruise ship port of call for decades, and those passengers typically made up most of the company’s Haligonian customers. With this large revenue stream closed, it has shifted its focus from international to local visitors, particularly since Nova Scotia is in what is known as the ‘Atlantic Bubble.’ Because of the low Covid-19 numbers in the region, residents of the Atlantic provinces may travel without needing to self-isolate for two weeks. Taking advantage of this, the company is focusing on smaller, more intimate offerings to satisfy this clientele.

One of these new offerings is Dinner on the Ocean Floor, a unique dining experience previously available only to cruise ship passengers due to its high price. Diners eat a meal of local and sustainable food and drink right on the sand during low tide while enjoying signature Maritime views and weather. This is possible as its unique geography gives the Bay of Fundy the highest tides in the world.

“We’re going to have a regular schedule of that product for the general public, whether it’s locals or visitors,” Campbell says, adding the company can offer the experience for locals at approximately one-fifth of its previous price. “You can still have a wonderful experience, but still make it much more affordable for locals.”

Entertainment is also being added to most offerings. The company is working with authentic Maritime artists to include music and dancing for its guests, to showcase previously untapped Nova Scotian talent. “We’ve learned the value of entertainment and creating the experience, more than ever before,” Campbell remarks, elaborating that this ties into Ambassatours’ strategy of uncovering Nova Scotia’s hidden facets.

The results have been heartening. “It was really amazing to see how cooperative and understanding the public were,” he relates. “We’re seeing the satisfaction level go through the roof when [we] up the experience.”

Ambassatours’ most ambitious plan is also its newest. It will be managing all tours, including transportation, to nearby Georges Island. Canada’s newest National Historic Site offers history right in the Halifax harbour. The island served as a fortress and prison during the eighteenth and nineteenth centuries, with subterranean passages crisscrossing the island. Although there is a wealth of local history and folklore, public tours to the island were unavailable until this year, when Parks Canada formally opened the island to visitors. Ambassatours was one of several companies considered for the contract and won the bid to ferry customers to and from the island on several weekends this past summer and autumn.

While landing the contract has been a major coup for Ambassatours, it was hardly unforeseen. The company had natural advantages in waterfront assets and resources such as watercraft to ferry customers to and from the island, and strategically-positioned ticket booths and bilingual staff to handle transactions in English and French. Still, Ambassatours took no chances, writing a two-hundred-page proposal for consideration. “I’ve never seen a proposal as detailed come out of our office,” he states. “We wanted to leave no stone unturned and make sure we exceeded expectations.”

Tickets for island excursions sold out within forty-eight hours, surpassing Ambassatours’ wildest expectations. “We knew the demand would be strong, but we didn’t have any idea of just how strong,” Campbell says. “In a down season, it was nice to have the bright light of that for sure.”

Following this success, the company is working on sophisticated GPS audio guides to enhance the experience. “It’ll give people the idea to perhaps go for an entire day,” he says, explaining that customers are now bringing picnic baskets. The success of this first venture is giving Ambassatours new ideas on how to continually improve its service in 2021. “We think we can even ‘up our game’ on the environmental aspects and the novelty on the next go-around.”

Campbell and his colleagues are emboldened by the success of Georges Island and by reports from abroad of cruise ships returning to Mediterranean ports. Passengers can now leave ships for shore excursions under tightly-controlled conditions, and a significantly higher percentage of passengers are leaving ships than before COVID. So even with cruise ships carrying fewer passengers, more passengers taking shore excursions are bringing numbers back to pre-COVID levels. “It’s encouraging to see it unfold,” he says.

In addition to upgraded operations around Georges Island, Ambassatours is also in the early stages of operations around nearby Oak Island. Already the subject of legends and a hit TV show, Oak Island previously hosted tours for cruise ship passengers that were “extremely well-received,” according to Campbell. He anticipates launching tours from the much closer town of Mahone Bay, rather than Halifax. “The demand is there, and when we get this together, it’ll be a very entertaining and exciting product.”

Other potential ideas include a new ramp for its Harbour Hopper amphibious trucks, providing a more central location and free advertising when they hit the water, and a ‘haunted bus’ tour featuring some of Halifax’s spookier elements.

On a smaller scale, Ambassatours is paying close attention to changing social dynamics. On one of its tours, a customer voiced the criticism that the company’s offerings paid short shrift to the Indigenous and Black Nova Scotian populations and their efforts in shaping the province. Taking the comments to heart, staff members are working with representatives from both communities to offer a more balanced and inclusive tour. “We thought we were pretty good before,” he comments, “and we came to realize that we weren’t. It was a humbling experience, in a good way.”

This desire for self-improvement comes not only from Ambassatours’ values but also from Campbell’s realization that customers are more precious than ever. “Customers have lots of choices, and you can’t take anyone for granted. You have to ‘wow’ them, and I think that’s how companies are going to survive,” he observes. “You’d better be good.”