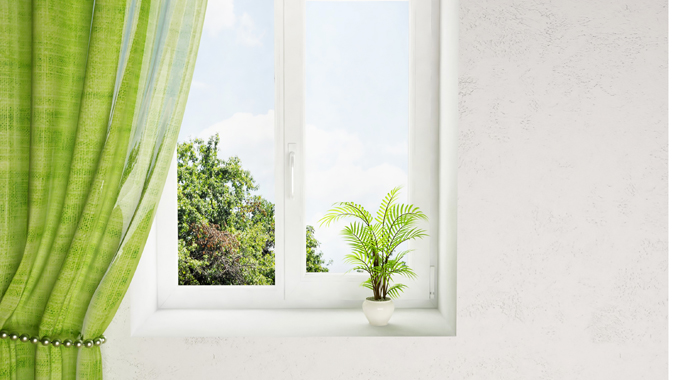 As the winter months continue to impress their power upon us – and on a completely unrelated note, I’m thinking a nice long visit to our Australian offices is long overdue – it’s only natural that our minds turn to ways we can keep the heat in. While home improvements in the dead of winter may not be the most popular choice, necessity sometimes wins out. It’s cold here in Atlantic Canada, and the time for new windows is at hand!
~
When building or renovating with heating, cooling, and efficiency in mind, a building’s “envelope” is of paramount importance. A structure’s outer shell, shielding the interior from what lies beyond, the envelope includes such elements as the roof, walls, foundation, and floors. All of these features can be made “greener” in myriad ways – yet, at the end of the day, the installation of windows is sadly akin to punching giant holes in that envelope. Of course, nobody wants to live in a dark, windowless box, and in any case, unless you’re working with a new build, you may not have much choice in the size, number, and placement of windows. I know I’m not about to start bricking up my view, my sunlight, or my fresh air.

We come, then, to what goes inside the “hole in the envelope.” The wrong choice here can mean significant losses in energy efficiency, as the average home may lose as much as 40 percent of its heating or cooling through its windows – inexcusable losses in these carbon-crunched times (not to mention, in February). Yet the right choice can make all the difference. Today’s windows are becoming available in increasingly energy-efficient, and even eco-friendly varieties, with new materials and technologies to be found in every element from the framing, to the coating, to the glass itself.

Windows can tell us a lot about a building. They are an ever-evolving element of the construction process, and, as one that is by its nature impossible to hide, they can speak volumes about a building’s age, style, and degree of energy efficiency. It wasn’t until the late 17th century that glass windows became common in homes (before that, windows were actually made up of panes of flattened translucent animal horn, paper, or thinly sliced marble) and the first of these tended to be small, as glass was expensive and seen, rightly, as a very poor insulator. Over the centuries, windows have evolved from a tiny hole in the wall designed to let in a little fresh air and light into an integral aspect of a building’s functionality and aesthetic. Yet for much of that time, they have remained largely inefficient, the weak link in most buildings’ envelopes.

Recent developments in the field have done much to change this. In terms of the glass itself, stronger and larger slabs are now much more accessible, allowing for the stunning walls of windows often seen on modern skyscrapers. Of course, windows are not as insulating as solid walls, but allowing more natural light in can help regulate a building’s temperature and can lessen occupants’ reliance on artificial lighting, helping to keep energy costs down. Double or even triple glazing also drastically improves insulation and temperature regulation, and low-e argon filled glass can be used to further tweak the amount of sunlight which enters – arguably, this latter type of glass makes a bigger splash in warmer climes that are trying to keep cool.

All of these factors contribute to a window’s U-value, a number which indicates the amount of heat lost, the inverse of the R-value associated with insulation; in the case of U-value, the lower the number, the better.

For those of us who may be thinking green, it is important to keep in mind not only energy efficiency but the entire life-cycle of the product. In terms of materials, the most common type of window frame currently on the market is made from PVC – polyvinyl chloride. While inexpensive and readily available, this material contains very little recycled material and releases dioxins in both its manufacture and eventual disposal. It is strongly discouraged by environmental groups and some countries, such as Germany and the Netherlands. Yet this is a very well understood material with good thermal resistance and low maintenance needs, often coming with highly skilled installation and robust warranties, and it should have quite a long lifespan.

Another long-lived framing option is aluminum, often used in commercial installations or in architecturally designed homes. While non-toxic, aluminum is a good thermal conductor and can allow approximately 87 percent of warm air and 49 percent of cool air to pass through. Wood is a renewable option with high aesthetic appeal, but must be treated and maintained to maximize its lifespan and prevent rot. It can be subject to shrinking and swelling with humidity, and is particularly vulnerable to water ingress. Perhaps the most eco-friendly option is fibreglass; both physically and thermally stable, fibreglass is stronger than PVC and will not rot like wood or conduct heat like aluminum. It is, however, significantly more expensive than other options and not as commonly available.

Considered a significant investment, high-performance fibreglass windows are largely used in Germany, a country known for its leadership in the area of energy efficiency, and are also available from a series of leading Canadian manufacturers, including Accurate Dorwin, Duxton, Fibertec, Inline Fiberglass, and Thermotech. Even U.S. builders often import from these companies, writes GreenBuildingAdvisor.com’s Martin Holladay. These quality products aim to meet or exceed Energy Star and LEED standards.

In any material, the frame itself can also have an impact on heat loss and energy savings. Upgrading from a typical 3 ¼” frame to a more robust 4 ½” can have a significant effect. Even the weatherstripping has an impact.

Finally there are the window mechanisms themselves to consider. While any infiltration of air equals energy loss, practically speaking, people want windows that can be opened for fresh air. A hopper style window – hinged on the bottom and tilting open at the top – is the best performer here, followed closely by a casement window, which is hinged on either the left or right side and opens out with a crank mechanism. Among classical style windows, single hung perform better than double hung, and these, says Moncton, New Brunswick’s Window World, “do not interfere with walkways, decks, flower pots, or anything that you might place outside your windows.” As such, they have enduring, timeless appeal and a certain classic aesthetic.

The orientation, placement, and coverings of windows also play a role in their green performance; in most instances, maximizing daylight while minimizing heat gain is optimal. In our homes, we may have different needs for each different room, depending on its purpose; there’s little benefit in a blindingly bright media room, after all. But in public buildings or workplaces, natural light and views of the outdoors have been shown to contribute positively to the workplace environment, and this element is beginning to be woven into some of North America’s newest, smartest designs. Blinds and other window coverings may be chosen in part for lending privacy, but can also play a role in minimizing summer heat gain. “For example, when completely closed and lowered on a sunny window, highly reflective blinds can reduce heat gain by around 45 percent,” according to Energy.gov. Drapes and shades also have an impact, while awnings on south- and west-facing windows can help to limit solar heat gain at the source.

When glass windows first came on the scene in the 17th century, it likely couldn’t be conceived that they would one day feature so prominently in whole-house efficiency and sustainability. But with such important roles to play across the spectra of both liveability and energy efficiency, it’s no wonder that windows often serve as the make or break point in green building design. Much more than just “holes in the envelope,” windows frame our view of the world, and they impact upon it far more than we may realize. Even in February, the view looks pleasant.