Higher Education and a Healthy Economy 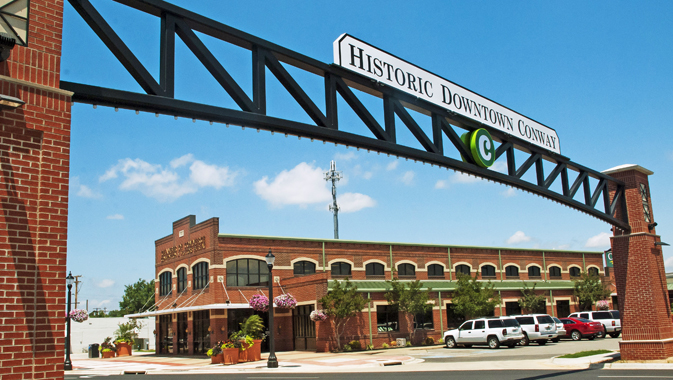 How does a city come to be? Logic dictates that a city should be formed where there are resources or perhaps a body of water. Another way, long romanticized, is that of the community that springs up along a railroad track. Conway, Arkansas is just such a place.
~
This city is also known for its higher education. It also possesses one of the most diverse economies in the U.S., low unemployment, an educated workforce and the recent discovery of natural gas. Business in Focus spoke with Jamie Gates, Senior Vice President of the Conway Development Corporation, to find out more.

Conway can trace its roots back to the late 1870s, when it was founded by a Harvard-educated railroad engineer by the name of A.P. Robinson. He acquired the deed to a one square mile tract of land near the old settlement of Cadron and began to develop that land after railroad came through. Shortly thereafter, the railroad offered land at twenty cents per acre in order to bring in Roman Catholic German immigrants along with Swiss and Austrian settlers. This provided the foundations for Conway.

What probably defined the city, more than anything else, was its strategic decision, over one hundred years ago, to pursue higher education. The city successfully attracted three colleges. “We were a community of 10,000 people that had three colleges, and now we are a community of 65,000 with three colleges,” explains Gates. “That changed our future, as our earliest economic development decisions were to pursue institutions of higher learning. Everything that has happened to us after that is a direct result of those colleges.”

Thankfully for Conway, that is an industry that becomes more relevant with each passing year; every May, it launches a new class of professionals into the workforce. For this reason, Conway has a reputation for punching above its weight in the competition for white collar office jobs. Almost forty percent of the city’s working population has a bachelor’s degree, which is a significant number anywhere in the country. “So, we have three colleges that are all completely different. They essentially represent three different silos in the higher education field, and they are all over one hundred years old,” says Gates.

The University of Central Arkansas is a public institution with over 12,000 students. Its strength is in health sciences, with occupational, speech and physical therapies as well as education. It was founded as a teachers’ college, a traditional education foundation, but now offers over eighty majors.

Hendrix College is a nationally respected private liberal arts college. “It is seen as one of those colleges that changes lives – one of the best value colleges in the country.” It has over 1,000 students and more than half of them are drawn from outside Arkansas proving its allure. In 2010, it was named as one of ‘The Top 50 Schools That Produce Science PhDs’ by CBS MoneyWatch.com.

The private liberal arts Central Baptist College also has 1,000 students and offers four year bachelor’s degrees to go along with a number of two year associate degrees. It offers majors in the fields of religion, behavioral science, general education, business, science and music. Central Baptist College is the fastest growing of the three colleges.

“We have the colleges, but we’ve also got economic activity that offers opportunity to a college graduate. When you get the college graduates, you get the people to come here as freshmen. Then they get their first or second job here and start having kids. It drives growth; it drives our median age down. When you keep those graduates, it drives our median incomes up, so it’s a great cycle to be in!”

Conway is different from many college towns because it does have other independent economies. A central figure in the economy of Conway is the Acxiom Corporation. With about 2,000 employees, it is the largest holder of consumer data in the country and was founded in Conway in 1969. It uses consumer data, analytics, IT, data integration and consulting solutions to help companies conduct direct marketing programs.

Also in the technology sector, earlier in 2015, it was announced that three new companies – all technology oriented – would be locating in the downtown core. Attracted first and foremost by the availability of a young, educated workforce, companies are also drawn by the affordability that comes from being in Conway. Companies that move here are also not going to have to sacrifice employee quality of life that sometimes happens when one is looking for a bargain.

“We’ve got a great downtown, great public spaces and a convenient location that can quickly get you to a number of social amenities,” shares Gates. “On a cost basis, we are obviously going to be competitive as we are in a low-cost state. We have a very pro-business climate and a young workforce.”

More recently, energy has been in the news. Natural gas was found in 2007, and Southwestern Energy has a regional office located here. It employs about 1,000 people. “We actually have the regional headquarters here and an office facility with several hundred employees. They manage operations for exploration around northern Arkansas. So we’ve got more engineers of every stripe, and also all of the supporting white collar activities that go with that, like accounting.”

This industry is seen as stable but not presently expanding due to gas prices. That said, the average wages in the energy field are some of the highest in the country.

Conway also has a thriving manufacturing sector that employs people across the region. Well-known manufacturing names like Snap-on and Kimberly-Clark have come here where they develop advanced next-generation products.

Why do they come to Conway? One of the reasons has to be proximity to the I-40, a major interstate located in Arkansas’ largest metropolitan area, only thirty minutes from downtown Little Rock.

Both manufacturers are in facilities that the economic development group, Conway Development Corporation, built as one of the first industrial parks when the I-40 opened.

“Those are our legacy type tenants who have thankfully reinvested and automated and have kept up with all the progressions that have taken place within the manufacturing sector over the last thirty to forty years.”

Conway does not necessarily enjoy the booms that other parts of the country have, but has never suffered through the busts either. It is a more stable economy characterized by sustainable growth since the Second World War. It has thriving facets of its economy, including a couple of state facilities, that are stabilizing factors.

“Some of our best years for job growth were 2008 to 2010. During the housing recession, our values never went down. The rate of growth slowed, but no one here lost money on their home. Compared to the rest of the country, this was a rare occurrence.”

A new hospital is under construction that is part of a Baptist hospital system. The $130 million project is a full service hospital that will have 450 employees. Already, the city is seeing some further growth spin off from that project.

‘Central Landing’ is a 150 to 200 acre development underway. Nearby ‘Lewis Crossing’ will be another shopping development that will be anchored by a Sam’s Club and Academy Sports. More big-box store development is going to happen in 2016.

The city is redeveloping its former airport. In September, a new airport opened worth $30 million, with an expanded runway and full features. “That left our former airport site right in the middle of town, open for development. In the fall of 2016, we will open a lifestyle centre. That building will almost certainly be worth about $100 million.”

At the south border of the University of Central Arkansas campus, the city will be urbanizing Donaghey Avenue. Fraternity and sorority houses will be built, and there will also be mixed-use development with student housing on top of retail, more restaurant space and a new science facility.

Add up all of the projects underway in Conway over the next twenty-four months, and one is looking at $300 to $400 million in commercial construction. Those are big numbers!

“There are a couple of ideas, that are emerging, that are important in our future. What we offer is a young, educated workforce and community that is a nice place to live when you are not working. Also, if you are going to start a business, the last thing you need are inflated wages, rent and start-up costs. We are just trying to build the best city we can to help people be successful.” The bottom line is that, from a housing, safety, educational and livability point of view, Conway is more than appealing; it is an opportunity waiting to happen.