A Convergence of Art and Technology 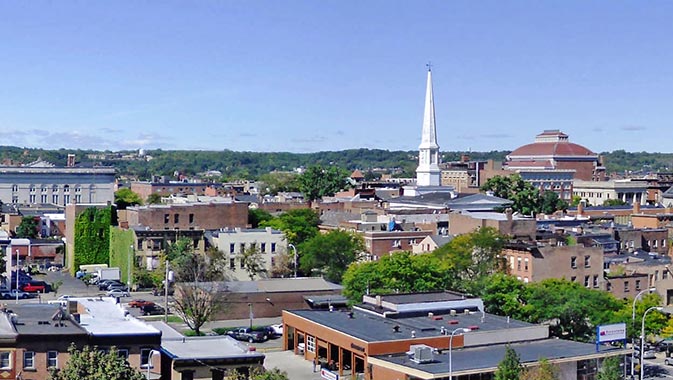 The City of Troy, New York is a historic urban core with a vibrant history that remains imprinted on its streets and buildings. It had a long legacy of manufacturing and was a bustling centre of development during the industrial revolution. Today, the local economy has made a resurgence as a hub for businesses, professionals, artists and tech entrepreneurs alike.
~
New York’s Capital District has a geography that is distinct from the layout of most metropolitan areas. Usually, as cities grow, suburbs develop around them. Here, however, there are suburbs surrounded by three cities: Troy, Albany and Schenectady. This tri-city area, of which Troy is a major pillar, has cultivated a unique economic environment for businesses, both in terms of working capital and growth prospects.

While many areas struggled to embrace the digital revolution, Troy dove in headfirst. Surrounded by educational institutions, hospitals and industrial infrastructure, Troy had the foundations of vast industrial growth in place but decided to leverage its resources to attract a particular, technology-centric segment of the market. Troy’s urban core legacy may have mapped the trajectory of its current growth spurt, but the city’s expanding economic footprint is built on a renewed commitment to creativity and community.

With a boom in its residential population and businesses alike, Troy is a city on the rise. Mayor Lou Rosamilia and Economic Development Coordinator Monica Kurzejeski gave us an inside look at what sets Troy apart.

Recently renamed ‘Tech Valley’, the Capital Region’s economic footprint is changing, with Troy serving as an important contributor to this shift. Through a vertically-integrated infrastructure that blends technological development, the creative sector and a funky urban lifestyle, Troy has become an attractive environment for all kinds of technology firms.

Information technology, programming, video gaming and advanced manufacturing industries are some of the fastest growing businesses in the area. The trend is ignited in part by Troy’s highly specialized labor force. Troy is home to not one, but three nationally acclaimed colleges, which have cultivated a highly-skilled talent pool, essential for advanced technical firms. Rensselaer Polytechnic Institute, as well as Russell Sage College and Hudson Valley Community College, draw in students and researchers from across the world.

As Rensselaer’s Director of Community and State Relations Chris Nolin explained, these vast educational resources feed back into the wider economic development of the region. “Research conducted at Rensselaer fosters discovery to address the world’s most pressing challenges: from energy security and sustainable development to biotechnology and human health. Rensselaer graduates provide a rich pool of talent for established companies vital to the economy of the region such as IBM, General Electric and GlobalFoundries.”

Classical arts and architecture have been a fundamental draw for tourists to Troy for decades, and that trend has continued with a twenty-first-century twist. A recent study found that the creative economy is the sixth largest employer in the capital region, and the number is growing. A title like ‘Tech Valley’ brings with it professionals and organizations with an eye on progress and an appreciation of the value of creativity.

A creative economy is one based on the arts, design and, you guessed it, creative professions. Often areas fall short in a commitment to investing in these endeavors, viewing the arts as an expense, instead of an opportunity. However, in Troy, the unique blend of creativity and innovation has stimulated unparalleled growth, and technology firms and tourists alike are finding opportunity in the city.

With an eclectic mix of arts, engineering and design, Troy’s economy meets at a strategic cross-section of arts and technology, creating the perfect conditions for companies who think outside the box. From information technology to the video gaming industry and even advanced manufacturing, creative professionals play a crucial role in innovation across the industrial spectrum. As a result of the professional and educational setting of Troy, there is a substantial population of graphic artists and designers who call it home. Ms. Kurzejeski explained that the potential of this market will only increase in the years to come. “The creative economy, which is developing in Troy right now, is very unique and exciting in terms of what it means for the future. We are anticipating further growth.”

With its technology development and creative economy, Troy has fostered a prime environment for innovation. The city’s ‘Center of Gravity’ and Rensselaer’s ongoing research initiatives are a practical case study of Troy’s innovation.

The Center of Gravity is a ‘makerspace.’ Makerspaces are community-driven locations where people gather for the purpose of sharing resources and knowledge. In these spaces, novices, professionals, creative-minded people, lobbyists and technology enthusiasts come together to collaborate towards innovative ends. Laban Coblentz, a board member from the Center of Gravity explained, “The Center of Gravity brings to Troy a unique formula for ‘community-based business cultivation.’ We don’t ‘incubate’ or isolate; we integrate. We want our companies and inventors to be tied into Troy’s hands-on urban scene, adding vibrancy and can-do creativity as part of the community.”

‘Maker culture’, or technology-based do-it-yourself, has become an integral part of the wider tech industry, and Center of Gravity has leveraged this collaborative development to create new grassroots growth in Troy. This epicenter of innovation works to develop new products and business with the aim of eventually taking them through to commercialization. It benefits the local economy on a larger scale as it creates ripples of growth throughout the region.

Rensselaer’s ongoing research is another major contributor to the development of innovation in Troy, and The Jefferson Project at Lake George is a prime example of this. Chris Nolin explained the global significance of this ingenious research:

“The Jefferson Project at Lake George is a collaboration between Rensselaer Polytechnic Institute (RPI), IBM Research, and The FUND for Lake George. The Jefferson Project involves more than sixty scientists from around the world including IBM Research labs in Brazil, Ireland, Texas and New York. The project is deploying Internet of Things (interconnected objects with sensors and electronics that exchange data) technology on a grand scale.”

“The project, one of the most ambitious research projects to deploy big data (a term for sets of data larger than traditional processing applications can handle) and analytics (analysing data to discover hidden useful information) technology to manage and protect a body of fresh water, is entering a new phase in which enormous amounts of data will be captured from sensors and analyzed. Scientists anticipate that insights uncovered from the data collection and discovery stage of the project will not only help manage and protect one of America’s most famous lakes, it will also create a blueprint to preserve important lakes, rivers and other bodies of fresh water around the globe.”

Innovation is the major theme of Troy’s current economic development, but this ethos has carried all the way through to the area’s quality of life offerings as reflected in the city’s tag line ‘Enjoy Troy.’

“In the up-and-coming industries, people work hard and play hard, and they want to be a part of the community itself, so neighborhood development is an important part of our economic development overall,” explains Mayor Rosamilia. In recent years, community investment has been at the forefront of Troy’s regeneration.

With three education institutions and two major hospitals, Troy’s promise for young professionals is undeniable, but the area’s neighborhood development extends beyond the confines of basic infrastructure.

Historical urban core areas were often constructed with waterways at their back door, but Troy has flipped the urban design to highlight the beautiful natural resources of the city. Aiming to attract progressive businesses, Troy created a walkable downtown and several community initiatives that completely shifted the look and feel of the city. While maintaining the integrity of the architecture for which the city is so famous, Troy offers an atmosphere of urban sophistication and the benefits of close-knit community.

“We have some phenomenal infrastructure here which is now being repurposed. The walkability and accessibility of the city is now attracting a lot of young millennials,” says the Mayor. As industries and professionals continue to flock here, the youthful hip setting is a cherry on top of its vertically-integrated recipe for success.

Laban Coblentz, from Tech Valley Center of Gravity (CoG), summed up this unique local culture best: “Troy is the ultimately hip small-town convergence of art and technology. Whether your passion is steampunk or the next world-changing technology, you can build it here in the shadow of Victorian-era architecture. Troy’s brand is still emerging: a sort of post-industrialist decay chic. That’s rare.”