A Business, A Passion 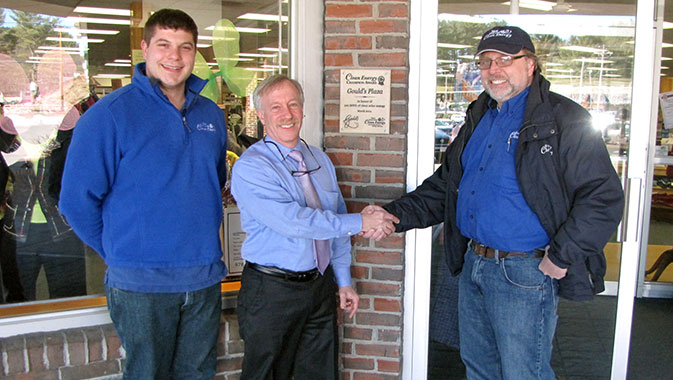 As a journalist, I have had the privilege of interviewing a wealth of interesting professionals from across the spectrum. Although all businesses come with a story to tell, there is only one thing more impressive than an entrepreneur with vision, and that is an entrepreneur with passion. New England Clean Energy’s President, Mark Durrenberger, is one of those professionals.
~
In speaking to Durrenberger, the firm’s founder, it was clear that this solar energy provider was born out of not only business ambition, but also a personal belief in the importance of clean energy. The business’ website sums it up best, saying: “We just believe individuals can make a difference, and we want to be among those individuals.” It is this point of difference which has propelled New England Clean Energy to the forefront of the U.S. energy sector, earning it recognition as the sixth largest solar installation company in Massachusetts and 301st nationally, according to Solar Power World’s 2015 Top Contractors List.

Taking it Personally
At New England Clean Energy, business is personal. Despite the fact that the energy industry is increasingly shrinking and saturated by major multinationals, Clean Energy has managed to not only survive but thrive while remaining true to its local roots and personal ethics. Through focusing on personalized service and face to face interaction, the company has built a sturdy reputation and a rich portfolio of major projects.

The company charges sustainable margins to ensure it is around for the long haul to serve new and existing customers. It is privately held, 100% self-funded, debt free, and has the financial stability and the management capability to assure its continued growth, profitability, and customer satisfaction.

With 32 employees and multiple installation teams, the company is able to address projects of all shapes and sizes, deploying installation crews to multiple projects each week or to one larger install when more hands are required. Using only its own electricians and solar installers helps meet internal quality standards.

New England Clean Energy was created just as interest and concern over sustainability and fuel began to peak. Starting with small wind turbines, the operation would eventually develop into a residential solar energy company, later growing into a major provider of solar systems for both private residences and commercial projects. Mark Durrenberger founded the firm in 2006. With an education in energy engineering, Durrenberger developed his career in project management and consulting where he found himself with the desire to make a more meaningful impact on the world. He had a personal concern about climate change, and a drive to create a solution; ultimately, it was this passion that would lead to the creation of the company we see today. Durrenberger believes strongly in empowering people to gain energy independence via sustainable sources. This conviction was so strong it even led him to undergo training directly from Al Gore, working as a sort of environmental ambassador of the sustainability-focused documentary An Inconvenient Truth.

In the nine years since the company started, it has grown into a regional leader, turning over millions of dollars annually. Today the company is one of the most trusted providers in New England, servicing a wide portfolio of clients throughout central Massachusetts, Northern Rhode Island and Northeastern Connecticut. The company’s astounding success has been built on a commitment to ethics and service, providing a case study in business development done right.

A Bigger Benefit
In recent years, solar energy incentives have become a major talking point for politicians, and consequently inflated the competition in the sector to an all-time high. As new alternative energy providers have begun to pop up almost daily, New England Clean Energy has offered the promise of knowledge, experience, and the human touch.

The technology behind solar electric systems has undergone major changes since its first entry into the market. Solar energy has become an extremely reliable, virtually no-maintenance solution to energy efficiency. Solar energy has become widely accepted as not only a sustainable, but an affordable energy option. Thousands are turning to solar for cost-saving and environmentally-conscious reasons. Since private citizens and major commercial works alike are able to incorporate solar energy and almost immediately see the financial return, it is no surprise that the systems are becoming increasingly common.

Although solar is inarguably environmentally sound and affordable, these systems are heavily impacted by the support of the public sector and the waxing and waning of the U.S. political system. There are currently very advantageous national and even state-level subsidies in place for individuals and companies who invest in clean energy, so the savings of these systems far surpass the basic monthly household energy bill. Durrenberger explained that, “Solar energy is definitely growing in both the commercial and residential market. The major motivator on the commercial side is the tax benefits, and there are clear benefits on the overall energy bill for everyone.”

Local and Proud
While much of the alternative energy market has moved overseas, run by corporate multinationals with regional subsidiaries, New England Clean Energy has remained wholly New England owned and operated. The importance of on-the-ground local knowledge is important in any industry, but as Durrenberger explained, it is uniquely essential when it comes to solar energy.

Since New England Clean Energy started as a residential solar provider, its roots are based in client relationships. With a cohort of staff that live locally, customers have found an alternative to the impersonal and often unsightly work of competitors in the space. Durrenberger went on to explain that clean, respectful, and trustworthy service on site is what the company is known for, and one of the prime reasons it has been able to withstand the influx of competitors. “When people are done with us,” he said, “they always notice it was done differently. They compare us to other contractors and we leave the site noticeably cleaner, we are exceptionally respectful and are always responsive to their requests. We describe it as a craftsman-like quality.”

The firm’s growth has been built on a foundation of experiential expertise and a corporate commitment to providing the same level of personal, holistic solar energy services to every project regardless of size. In-house, the firm offers each step of the solar energy process including design, engineering and of course, installation. This turnkey solution to alternative energy cuts out the complexity of subcontractors and ensures that each system is created and serviced by experts that have an in-depth understanding of its function and value. As Mr. Durrenberger said, “[When it comes to solar energy], it is a very personal relationship because we are helping people become independent. We are much more about the relationship than other contractors.”

This emphasis on relationships translates to a reputation worth its weight in gold. In the residential market, Clean Energy has more customer reviews on the independent consumer website Solar Reviews than all but two other installers in the country, and one of the highest ratings. That same level of attention is applied to the commercial market to ensure not only an unmatched level of service but a delivered system that will endure and provide clean renewable energy for a long time to come.

A Bright Forecast
At the core of New England Clean Energy lies a belief in not only the business potential of solar energy, but also its social and environmental importance. This integral aspect of the firm’s ethos is what has ultimately driven its success in the increasingly competitive market, and will for years to come. New England Clean Energy has been growing by about 50% a year, driven by increases in the number of systems installed and the size of those systems. The company has recently begun expanding into energy efficient heating and cooling, as well as exploring new battery systems. New England Clean Energy proves that business achievement backed by ethics is the way forward – and moreover, that business paired with personal passion is a force to be reckoned with.