Serving Craft Beer and Saving the World at the Same Time 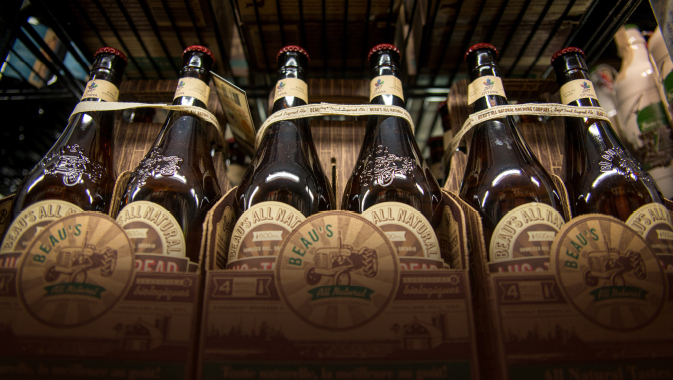 Beau’s All Natural Brewing Company, based near Ottawa, Canada, is built on a foundation of excellent beer, idealism and sound business practices. Fired by explosive growth, the team at Beau’s are proud of their brewery’s reputation for independence and social responsibility.
~
“One of things that makes us very different is that we have a higher purpose. We are in this to make wonderful beer but we are also trying to use that as the engine to make the world a better place. I really believe beer tastes better when you can feel good about drinking it,” says CEO and co-founder Steve Beauchesne.

There might be something to this as Beau’s growth has been tremendous: “In the last five years we’ve grown by 525 percent. We tend to be growing at a rate of between 25 to 40 percent a year,” reports Beauchesne.

The company was launched in 2006, following discussions between Beauchesne and his father, Tim. For decades, Beauchesne Sr. had run a textile business in small-town Vankleek Hill, Ontario (population roughly 2 000), only to see the textile sector dry up or move increasingly offshore. He had a building but no functioning company to occupy it. Tim Beauchesne had business experience while Steve Beauchesne was a home brewer and craft beer aficionado. It was decided to meld these talents and Beau’s All Natural Brewing Company was born, with Steve as CEO and Tim as president. The firm remains headquartered in Vankleek Hill.

A brewer named Matthew O’Hara was brought in as a consultant to develop beer recipes and “help us understand the technical side of making good beer … as soon as we opened up, we moved him from consultant to master brewer. He’s still in the role,” says Beauchesne.

The first beer the company made was called Lug Tread Lagered Ale. It remains Beau’s flagship beer, accounting for 70 percent of sales. In 2016, Beau’s made more than 40 beer brands in total, some of which were seasonal or single-batch offerings.

From the start, Beau’s brews were a critical hit: “Our very first batch of beer won the award for best beer of the festival at the 2006 Golden Tap Awards,” notes Beauchesne, referring to an Ontario-based craft beer competition. The company has since gone on to win multiple awards (100 as of late 2016) for its beers and brewing, as well as for packaging and design, and business and entrepreneurial practices. Beau’s growth strategy was predicated on building up market share in its own backyard before expanding outwards.

“We had the mindset of, ‘let’s keep the beer as close to home as possible’ instead of trying to ship it everywhere. So for the first three or four years we stayed in eastern Ontario; we went as far as Kingston. When we felt ready, we moved into Toronto. A couple years ago, we added in the rest of Ontario, then we added Quebec and a little bit of New York State. [In 2016] we moved to the rest of Canada,” says Beauchesne.

Beau’s All Natural beers can currently be found in roughly 2 500 to 3 000 restaurants in Ontario, most provincial liquor and beer stores, and in a handful of supermarkets (grocery stores only recently received approval to sell beer in Ontario). The company’s products are also widely available in Quebec stores, restaurants and other outlets.

“It’s harder to find us [outside Ontario and Quebec] but we’re in pretty much every province now. If you hunt for us, you can find us,” says Beauchesne.

Beauchesne explains how Beau’s stands apart from corporate breweries. Corporate breweries aim for consistency—making sure the company’s beer tastes the same from city to city and batch to batch. While consistency is important at Beau’s, the brewery allows for “a certain amount of natural variation” in its beers.

For example, brewers at Beau’s don’t pasteurize their beer, which allows yeast to flourish. “The living yeast in the beer is going to add beneficial qualities and flavour … From one beer to the next, because you have living beer, the flavours will evolve.”

In addition, the company has “really taken sustainability to heart, so not only is every beer we make certified organic, we use local spring water. Our water has natural variations. There’s more mineral pickup in winter months than summer months … It means the beer you’re drinking is not just of a particular place but of a particular time,” adds Beauchesne.

Sustainability and social responsibility are key to what Beau’s is about. The brewery is now 100 percent powered by green electricity and natural gas, and a program is being put in place to ensure that green fuel goes into the Canadian supply to offset the company’s vehicles’ consumption of traditional fuel. Beau’s has made a commitment to donate $5 million to community groups, charities and arts organizations between now and 2026. Among other projects, the company is helping a female entrepreneur set up a craft brewery in Rwanda.

In 2013, Beau’s became the first brewery in Canada to become a certified Benefit Corporation (B-Corporation). Certification was made by B Lab, a nonprofit organization that promotes socially responsible business.

“It’s a certification similar to being fair trade or organic but it’s someone certifying not the product but the company that makes the product. So they look at your governance, the way you treat your employees, the social impact you have, the environmental impact you have … In the last phase of certification, you literally have to change your incorporation papers [to say] you exist not only for shareholders but other [stakeholders] like the environment and community,” explains Beauchesne.

Attaining B-Corporation status is a reflection of the company’s self-reliant attitude. Being “fiercely independent” has meant the company has had to turn down financing offers from venture capitalists— “angel investors that want to see fast growth then sell the business,” notes Beau’s CEO.

Lug Tread has been declared the official beer for Ottawa 2017, a celebration of Canada’s 150th anniversary in the nation’s capital. Beau’s involvement with the event will allow Beauchesne and his team the chance to interact with craft beer fans across Canada and introduce them to their beer. This approach is typical of Beau’s grassroots, do-it-yourself brand of promotion. The company relies on internal resources rather than outside advertising or marketing firms to promote itself.

“We have what would constitute a full service ad agency that we run ourselves—graphic designers, videographer, content manager, events team, marketing specialists, etc.,” says Beauchesne. “We have a simple philosophy that says if the packaging is interesting enough to make you want to try the beer and the beer is good enough to make you want to buy it a second time, we’ve pretty much done everything we need to do.”

In mid-2016, the company also introduced an Employee Share Ownership Plan (ESOP)—an initiative that essentially allows a firm’s workers to buy the operation. “Since we started, every fan we’ve talked to at a certain point says, ‘please don’t ever sell out to a major brewery.’ This is our way to say we’re going to respect your wishes on that matter and stay independent,” explains Beauchesne.

Beauchesne will remain CEO as the employee-ownership plan takes effect. He and other family members are going to buy out their father’s shares over time, to allow him to move toward retirement. The motivation behind the ESOP was to ensure that the firm remains independent after Beauchesne and other key staff members eventually retire themselves. As the company grows, it faces the challenge of attracting qualified workers to Vankleek Hill. To get around this challenge, jobs are offered to the spouses of new employees when possible and promotions are made from within (allowing entry-level employees to rise up the ranks).

With a toehold in New York State, Beau’s may expand further into the United States but “we won’t take our focus off Canada and Ontario and Quebec in particular … We’ve been seeing a lot of media attention from the States and a lot of people there are asking us to come down,” shares Beauchesne.

Asked where he sees Beau’s in five years, Beauchesne says, “from a value perspective, we’ll be in the exact same place we are now: trying to make world class beer and using our business as a force for good. From a business viewpoint, we’ll be established across the country. We will have at least one or two new divisions doing completely new things. Our core focus will remain on Lug Tread but we will continue to play with experimental styles and fun new flavours in beer.”

The company has no plans to veer from the beverage that has made it such a success. “At this point, we’re pretty stuck on beer; I didn’t start the brewery because I love soda. We’ve been really been focused on making beer. That said, we do have a new spinoff brewery launching this spring and we’re planning on introducing three or four new brands. There are lots of cool projects coming up. One of the things that keeps us successful is we don’t say, ‘Hey, we’ve got a good thing, let’s stop and be satisfied.’ We’re always challenging ourselves,” says Beauchesne.