Who are Millennials and What do they Want in a Career?
Written by Jessica Ferlaino
View in Magazine
FacebookTwitterLinkedInEmail 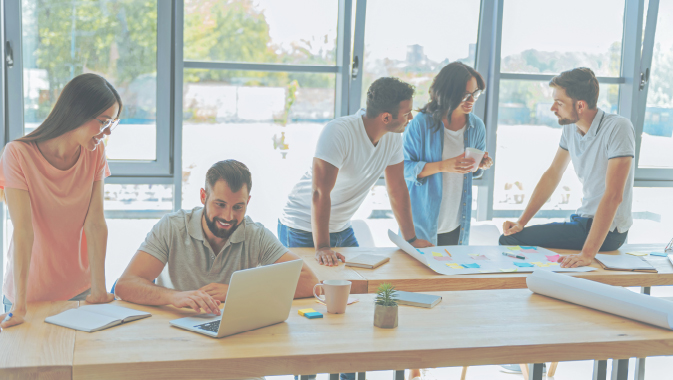 There are many stereotypes, perceptions and misconceptions about Millennials and their role in the workforce that need to be dispelled, especially as a labour shortage threatens the productivity and profitability of some industries, as they could be the solution to that problem…
~
From accusations that Millennials are entitled and lazy to claims that they have no work ethic, there is a lot to learn about Millennials, what they want in a career and how they can contribute to the strength of the economy.

Millennials have officially overtaken Baby Boomers as the largest living generation in North America and by 2025, the cohort is expected to comprise 75 percent of the global workforce, meaning like it or not, they are the future of the workforce. And, no. We’re not doomed.

According to the Pew Research Center, in 2017, 56 million Millennials (aged 21 to 36) were working or looking for work, compared to 53 million Generation X-ers and 41 million Baby Boomers. Millennials overtook Gen-X the previous year.

While there are very clear generational divides between generational groups, the truth is, each cohort is a product of the conditions of the time they were raised and are working with what they’ve got. So what do Millennials have that can contribute to the workforce?

Baby Boomers often criticize Millennials and are quick to compare their experiences to their own at the same age, which took place in very different socioeconomic times. It must also be noted that Baby Boomers are the generation responsible for raising Millennials.

Millennials, unlike Baby Boomers before them, do not have the same career prospects directly out of high school. They were told to go to university with promise of gainful employment upon graduation; instead, they racked up debt at an early age, unlike their parents, which has limited their participation in the housing market. They are starting families later in life and without stable employment, the outlook seems pretty grim for some.

While there are jobs and human resources aplenty, unfair assumptions, mismatched skill sets and cultural incongruences all serve as barriers to Millennials’ full participation in the workforce in a meaningful way.

Dispelling myths
Millennials are said to be entitled: they want everything handed to them instead of working hard and paying their dues. The reality is, Millennials spent years in school trying to achieve good grades. They participated in extra-curricular activities to strengthen their résumés to be more competitive in the market. Recruiters describe Millennials as a generation that is more aware and willing to speak up for what is right, willing to share ideas to develop better solutions that can potentially improve the organization they are in. This all depends, however, on having the right environment, resources and support.

The work culture of a company is important to Millennials. They want to feel engaged and valued, and they would appreciate opportunities to socialize and have fun with their peers, especially given that they spend a great deal of time with them and it fosters a greater sense of camaraderie and collaboration. An ideal environment to foster these qualities starts with respect: respect for their educational and career experiences to date, despite their relatively young age, respect for them as a person, and respect for other people, the community and environment. Social justice and philanthropy is very important to this generation.

Millennials are more willing to show their emotional side, and with this, they expect that their employers will personally interact with them, that there will be open lines of communication, transparency, and opportunities for professional and personal growth and development. Companies that are technologically advanced, communicate rapidly using digital platforms, foster innovation and entrepreneurship, and have evolved with the market are the most attractive for Millennials when choosing a career.

The general belief about this generation is that they shy away from hard work, they are lazy and they have no loyalty to any employer or career path. This couldn’t be further than the truth, for the most part. Millennials are more likely to hold out to find a career or a position that best suits them, but when they find it, they are loyal until the end. Millennials have spent much of their lives performing as students and as active community members to demonstrate their skills and build their résumés to make them employable, and they want to seek out a job that puts their unique skill sets to use.

It is likely that after graduation they were forced to take a minimum wage job, a job outside of their field or a precarious job to get started in a highly competitive labour market. Despite having more education than the generations before them, only 44 percent of Millennials are employed in permanent, full-time jobs.

The promise of long-term employment with a single company is no longer a reality, and Millennials have learned to adapt, with one-third of them working short-term contracts, freelance or employed through a temp agency. This gig economy, however, has been linked to poor mental health.

Pay is not most Millennials’ first priority, though it can be a motivating factor. Instead, they value flexibility, work-life balance, meaningful work and building relationships instead of just working a daily grind. Coaching is more attractive to Millennials than micromanaging or a top-down management style. They want a fair manager who is a true leader, who will provide mentorship and support, who will help them to be the best version of themselves professionally, and who will provide constructive feedback upon which they can build and improve.

The misalignment of Millennials’ education and experience with the needs of the market is due in large part to funding cuts to programs and apprenticeships and a gap in communication between education and industry. There are more job openings than there are eligible or qualified workers to fill them.

There is also a lack of career guidance and preparation at the high school level which has led many to pursue skills, degrees and designations that are irrelevant or inapplicable to the needs of the market – or are viewed as such – and cannot be transferred. Many Millennials would be willing to upskill or retrain if given the opportunity.

Business leaders and major industry players, recognizing the need for labour in non-professional streams, are increasingly bridging the gap with education to collaboratively solve the shortage of labour in the market, be it through apprenticeships, internships or job fairs and gearing programming to the needs of local markets.

Right now 6.7 million job openings need to be filled in the U.S. alone. Positions in the skilled trades, construction, truck driving, and other sectors that are necessary to keep infrastructure up and running are no longer desired careers and are in great demand of talent. It is up to industry to communicate the various advantages and opportunities to Millennials to pique their interest in these careers.

Millennials will represent more than one of three adult Americans by 2020 and it’s likely that they have no idea of their own power. If asserted, the collective strength of the generation could lead to a serious shift in the workplace and in the economy. This is especially true of the impact it will have on the composition of the workforce, not only in terms of representation but also in terms of the ability to meet the demands of various industries and sectors while at the same time reconciling the demands of a generation of digitally and technologically savvy individuals who know and go after what they want.

With the labour shortage reaching critical proportions, especially in North America, Millennials are going to have to be the answer to the problem. As the largest active cohort in the workforce today, the true implications of this generational shift has yet to be fully realized socially, economically and culturally and it may require companies to rethink their recruitment strategies.

Rebranding efforts and redefining a company’s priorities can also serve companies well when trying to recruit Millennials. A fresh vision and approach is the perfect way to attract an enthusiastic, encouraged individual who wants to make a positive impact through the work they do. Changes can be incremental but efforts should be made to overhaul a company on technological, organizational, cultural and philanthropic grounds to be appealing to the millennial workforce.

Companies may need to reach out to prospective employers via social media platforms like LinkedIn and Facebook to communicate the vision and mission of the company and the advantages of a career, meeting Millennials where they are to address human resource needs. Millennials are a generation who knows what they want, have worked hard to achieve it and are innovative enough to figure out how to make dreams a reality, even if this isn’t in line with the demands of the market and economy. Many of them want to work hard and find stability for the long term but it is a dream that, more often than not, feels out of reach.

When you boil it down, Millennials aren’t asking for much: they simply want a transparent and positive environment that fits their values, where their skills can be utilized to impart meaningful change in the markets and the communities they are a part of. What they want might actually be good for business and that’s worth investing in.