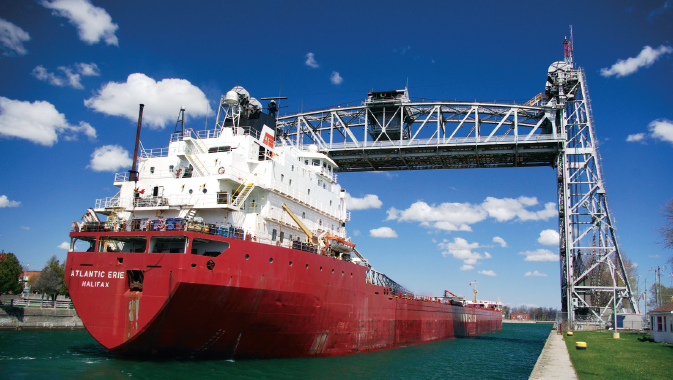 Port Colborne, a Francophone designated city, is ideally located in the Niagara Region which has close to 425,000 people. It is near major urban centres such as Hamilton and the GTA, while only being thirty minutes from Western New York and the Buffalo region. GO Transit trains are on the horizon which increases its accessibility even further. We at Business in Focus caught up with the Mayor of Port Colborne, John Maloney, to find out about the impressive amount of progress the city has undergone over the last four years since we last spoke.
~
Recently, the City of Port Colborne was granted a $2 million investment for the Lakeshore Road water main project and another $2 million for the Nickel area storm sewer project. That may not seem like much, but it is huge for this community. “There were some old systems in the Nickel area, and the large mains were just deteriorating. I had a school class in here yesterday and showed them the old pipes. You would not want to drink the water that passes through,” says the Mayor.

There are also multiple new projects in the City, approved under Infrastructure Canada’s Clean Water and Wastewater Fund of approximately $510,000 from the federal government, plus provincial government funding near $255,000, with the City providing the balance. This will improve the quality of life within Port Colborne by ensuring that water and wastewater distribution and collection meet the provincial standards.

The main pipes have been replaced, and the City is now moving toward assessing the sanitary and water service lines that go from the main line into the residences. It is suspected that there is a problem with water loss, and a portion of this issue is not on City lands, but on individual properties. Improvements to the water infrastructure will create a cost-effective system for the users.

New water meters are being introduced to help track leakage. The Mayor believes that the city could capture a lot of this lost water if it had the technology to efficiently pick up any leaks on private property. “These projects include introducing upgrade processes to enhance the capacity of our facilities by replacing aging components. This program helps to keep our waterways clean and communities healthy and viable,” says Mayor Maloney.

The Public Transit Infrastructure Fund provided $96,500, allowing Port Colborne to upgrade trails and to link with the City transit system, preparing for the move toward a Regional transit system. This will flow into the GO system that is coming to the Niagara Region from Toronto over the next couple of years. “We anticipate many of our citizens will use Go Transit to visit Toronto for business or recreational reasons and vice-versa,” says Mayor Maloney.

Port Colborne is constantly reviewing the needs of the business community to adopt strategies that will spur investment attraction and business retention. “Some of these initiatives implemented by the City include a freeze on Development Charges. We’ve temporarily waived municipal development charges for our community. We had a developer in here yesterday, and when we told him this, his eyes lit up!” says Mayor Maloney.

Port Colborne has an Industrial Community Improvement Plan, or C.I.P., which provides opportunities for new and expanding businesses on industrially designated land within the City. It allows them to receive financial assistance from the city for improvements to their property. The main goal is to promote investment that results in the productive use of lands and buildings to establish and maintain a business or expand an existing enterprise.

“We are bending over backward to assist people in developing their properties and to provide employment. It helps with our tax assessment and new jobs for the community, and they all work together,” says Mayor Maloney. It appears to be working as there has been job growth from 2011 to 2017 with 472 jobs added, which is significant for a community the size of Port Colborne.

Some local companies have been looking to expand over the last few years. Companies such as J Oskam Steel Fabricators Ltd. and Allied Marine & Industrial being examples, and another huge employer, Jungbunzlauer,is also expanding. It purchased Ingredion and has made a major investment into this facility. In June of this year, the food processing firm Olymel L.P. announced it is acquiring a local industry, Pinty’s Delicious Foods Inc. Olymel L.P is a large corporation and will have a positive effect on Pinty’s.

Craft breweries are all the rage, so it should be of no surprise that a new one opened recently in Port Colborne. Breakwall Brewing Company was established by a local entrepreneur, and all the beer is named after local sites within the community. People have an affinity for this hometown brewery, and it is faring well.

“We are also part of a business development project based on innovation and collaboration called the Niagara Development Corridor Partnership. Port Colborne is involved with four other regional professional economic development offices, confirming that the city has much support from the region through partnerships,” says the Mayor.

The City also works with the Region of Niagara and other members of the Niagara Development Corridor Partnership, to manage and promote the Niagara Foreign Trade Zone, which is a component of an economic diversification and competitiveness strategy. The Foreign Trade Zone offers five export programs to businesses. “Our proximity to the U.S. border makes these programs operate very well. We are a great location for them,” says Mayor Maloney.

There is a highly skilled workforce in Port Colborne that meets the needs of the manufacturing sector. It leads Niagara municipalities in college-educated and apprentice-trained workers. There may be a skills mismatch in Ontario with jobs that cannot be filled, but this is not a problem for Port Colborne where the local labour force has the skill sets desired by the manufacturing sector. There is a good spirit of cooperation in Niagara between the municipalities to provide economic support to both new and existing businesses.

Port Colborne has a budding tourism and arts and culture program which contributes to its standard of living. The Sugarloaf Marina is in a unique location where the Welland Canal meets Lake Erie, having over seven hundred slips. A new coffee house is situated where people can relax and enjoy a beverage while watching boats of the world pass through.

“This complements the diversity of restaurants we have. It’s more than just a hamburger and hot dog route, but not necessarily all upscale. Simply put, it is affordable, good food,” Mayor Maloney says.

The Roselawn Centre for the Living Arts is a popular spot. This wonderful 1860s Victorian building is home to a 268-seat professional forum which hosts the Showboat Festival Theatre. There is also a monthly author series where the likes of Ken Dryden and Margaret Atwood have been featured, along with local author Adam Shoalts, who wrote about crossing the Arctic in a canoe.

The upcoming Canal Days Marine Heritage Festival is celebrating its fortieth year with events alongside the canal on West Street and at H.H. Knoll Lakeview Park, which overlooks the Sugarloaf Harbour and Gravelly Bay on Lake Erie. The tall ships come in, and as part of the entertainment, there will be some Canadian bands over two nights with performances from 54-40 and Lowest of the Low. “We are expecting a good crowd as it is a free concert,” says Mayor Maloney.

Residents also have access to recreational opportunities like the Greater Niagara Circle Route. This lengthy trail goes from St. Catharines along the canal through Thorold and Welland to Port Colborne, down a former rail line to Fort Erie, along the Niagara River Parkway to Niagara Falls and Niagara-on-the-Lake, and back to St. Catharines, and is perfect for rollerblading, cycling or strolling.

The future looks positive when you see that Port Colborne is in close proximity to Niagara College and Brock University where partnerships have been nurtured over the years. Port Colborne’s industry has been fuelled by these relationships. One of the catalysts in all of this is the great lifestyle of the Region. Anyone who lives and works in Port Colborne is only about ten minutes away at any given moment.