New Technology and Old-Fashioned Quality Come Together at Tejas Tubular 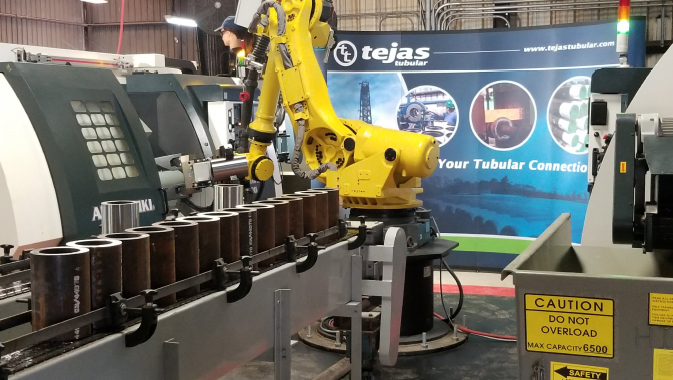 Oilfield supplier Tejas Tubular Products, Inc. manufactures American Petroleum Institute (API) tubing, couplings, and pup joints, among other products. Currently, the company is embarking on its third endeavor with robotics to improve upon the speed and safety of manufacturing. This includes the invention and application of new technology to help the robots operate at full potential.
~
Maximo Tejeda Senior has experienced firsthand the ups and downs of the petroleum industry, but as a now seasoned veteran, he has learned the intricacies of riding these waves to success. He started as a co-op student with Midwest Steel in 1970, and here he began a career as an industrial engineer working out of Portage, Indiana. He soon after found himself working at a tubular plant for National Pipe and Tube Liberty Texas. While the plant came to a close in 1982, this gave him his first taste of the industry, and in 1990, he started the company he oversees to this day.

It was in 1989 that Maximo was faced with the decision to continue working for other people, saving money for his children’s education, or striking out into oil country on his own. “I started the company with $68,000 that I had saved for my kids’ college,” said Maximo.

Taking a chance on the value of the experience he had acquired while working for different companies in the mid to late eighties proved to be a worthy investment. Through to 1994 Tejas Tubular solely produced American Petroleum Institute (API) tubing. One of the first big expansions came through the acquisition of Caporal Industries in 2003 which saw the growth of tubing production. This was followed by a major factory expansion in 2006 when it added a casing processing facility to its arsenal, giving the company the ability to use hot sizing and hot straightening capabilities in the production of steel tubing. Then in 2013, the company constructed a fully-automated casing processing facility as its first foray into robotics.

In 2014, Maximo was honored with the Male Hispanic Entrepreneur of the Year award, issued by the Houston Hispanic Chamber of Commerce in recognition of his outstanding contributions to the Houston business community. “I am completely humbled by this experience,” he said at the time, “and would like to thank the Tejas Tubular Team for making this possible.”

As Tejas Tubular started as a relatively small company, Maximo and the team were able to take advantage of the cyclical nature felt across the industry. Navigating downturns as the little fish allowed the company to turn a profit in times where bigger companies would struggle. This led to the continuous growth experienced by the company for the nineteen years that followed its inception. While the industry continues to throw curve balls, Maximo remains unfazed.

“2015 through 2017, the industry went through the biggest downturn it has had for quite a while, but we are now on the rebound,” said Maximo confidently.

Manufacturing takes place at an electric resistance welded (ERW) tubing plant in Stephenville and two casing plants that found homes in Houston and New Carlisle, Indiana. These are joined by the original plant, also located in Houston, which is capable of producing an array of joints, couplings, tubing, and oil field drill pipe.

Amongst the automaton workforce is a robot affectionately named Cathy. As part of the automated manufacturing process behind the company’s couplings, a robotic arm with a multitude of articulation points, touts a special handling tool designed by Tejas Tubular. This special tool imbues Cathy with better grip and maximum procession when handling couplings. Robots can do the work of two regular employees while also splitting time between multiple manufacturing lines. As the robot produces couplings, a quality assurance inspector oversees the process to ensure the final product meets the company’s standards.

The processes through which metal tubing and couplings are made generates hazardous debris known commonly as ‘chips.’ This type of waste comes in forms of dust, shards, or coiled shavings, and the cleanup and handling of chips is closely watched by OSHA. With regulations in place that require the doors of a computer-controlled lathe remain closed to prevent the spread of chips, the company was inspired to improve upon a time-consuming portion of manufacturing. Working within the rules, it has devised a method of gathering chips during the cutting process to greatly increase productivity. As the patent is pending, Maximo is playing this one close to his chest, but he believes that it is going to revolutionize the industry.

“We are in the final trial phase of this process, and we believe that it will be applicable to many different industries,” said Maximo.

Along with futuristic coupling production, is Tejas Tubular’s automated pup joint processing line. A pup joint is used to supplement a length of tubing to meet the exact requirements of each drilling job. As customers require very specific measurements, the company has taken it upon itself to improve the production process and keep all of its aspects in-house. All pup joints are hydro tested for leaks and steel strength with modernized equipment. This is followed by a magnetic particle inspection, a form of non-destructive testing that uses magnetic fields to identify shallow and sub-surface defects.

Next, is more quality assurance through another means of non-destructive stress testing known as a full-body ultrasonic inspection which uses ultrasonic frequencies to detect cracks, pits, and imperfections. This above all else provides the most accurate assessment of a pup joint’s structural integrity. With all of these tests done in-house and the full-body ultrasonic being unique to Tejas Tubular, the company can provide the best possible product in record time.

“The long-term goal is to keep growing. I feel if you are not planning to grow, you will then decline. You always have to be pushing because the competition is pushing around you. If you stop, they just overtake you,” said Maximo.

It was this focus on growth and a superior product that served the company well over the years. Tejas Tubular has set standards for itself that continue to be met and raised. “We’ve kept the same priorities since the beginning way back in January of 1990. Priority number one is safety and environmental. Priority number two is quality and customer satisfaction,” said Maximo.

Keeping these priorities at the forefront has kept Tejas Tubular concentrated on what is important: the people. With growth and expansion throughout the company, a human resource division is being added to each of the company’s locations. It is the people who innovate and take pride in the production process who will continue making outstanding products a reality and see Tejas Tubular guided into a bright future.