You Are What You Eat and Drink 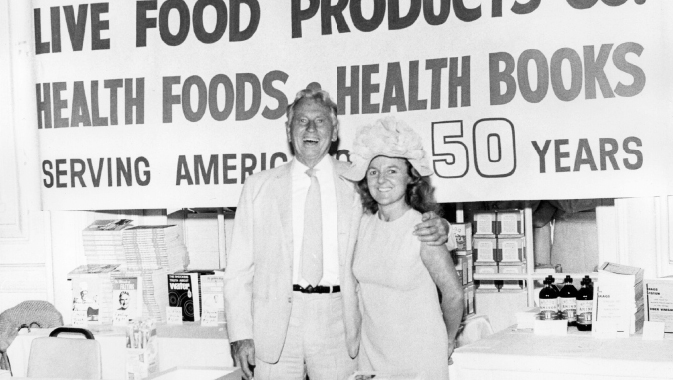 Since 1912, when Paul C. Bragg began his lecture tours promoting healthy living through diet and exercise, his name has been synonymous with health foods, especially the powerful cleansing, healing and germ-fighting qualities of organic apple cider vinegar.
~
Recognition of apple cider vinegar’s healthful qualities extends back to 400 BC when it is said that Hippocrates, the Father of Medicine, used it as a treatment. Its benefits were also recognized by Paul Bragg’s father, said Heather Cass, marketing director for Bragg Live Food Products, who told us how as a farmer he used apple cider vinegar and honey as a health tonic.

“Then when Paul was twelve, he went to military school and was exposed to a completely different and unhealthy diet and developed tuberculosis. In his books, he describes the Swiss sanitarium where he was treated with apple cider vinegar and honey, both rich in potassium. He wrote that he owed his recovery to using it persistently as it fought against the germs and toxins and said he was cured in two years and decided then he would devote his life to health crusading and that is what he did,” shared Cass.

“So that’s my understanding of how Paul Bragg started teaching people not only about the benefits of apple cider vinegar and honey but also about living a healthy lifestyle which includes physical activity and about how what you put in your body can either help you or harm you.”

Patricia Bragg took over as CEO of Bragg Live Food Products upon Paul’s death in 1976. “Patricia’s philosophy is ‘You are what you eat, drink, breathe, think, say and do,’” said Heather. “She really is an inspiration to us and a symbol of our company. When people see her, they see what we stand for. They see her energy level at eighty-nine (she’ll turn ninety in April), and they see her kindness and her lifestyle, and they want to be like her,” she said.

“She’s a dynamo and very recognizable. At trade shows such as Expo West in Anaheim where there are thousands of people, she could be Mick Jagger. People go to her and share their stories of how they were introduced to apple cider vinegar and how it helped them. Some are close to her age, and some are just teenagers, so her admirers range from young to old, and the connection she has with them is wonderful,” said Cass.

As Bragg’s Health Science Director Kate Phillips said, “People often think that the medicinal properties of apple cider vinegar are mysterious and are unable to find an explanation for how the vinegar is able to do what it does, so this is a great educational moment to explain what it is and how it works.” With a Bachelor’s and Master’s degree in Nutrition and Dietetics and Food Science from Drexel University, Northern Illinois, and Texas Women’s Universities, she has brought her expertise to the company for the past three years, using the company’s signature product: organic, raw, unfiltered, apple cider vinegar as the base of a variety of vinaigrettes, drinks, and cleanses.

The explanation for the medicinal qualities surrounding apple cider vinegar lies in the physiologically influencing properties of organic acetic acid and ‘the mother,’ which she explained is a network of naturally occurring bacteria and fiber. The ubiquitous Saccharomyces cerevisiae yeast is responsible for the first portion of the fermentation process which converts the sugar from the apples into ethanol. Acetobacter aceti bacteria, also ubiquitous, will subsequently consume the ethanol and produce acetic acid, and long strands of cellulose fiber. The ‘mother’ is a gel-like network of the bacteria and the cellulose fibers, which could act as a pre- and a probiotic.

Probiotics can stimulate the production of short-chain fatty acids in the gastrointestinal tract which will bolster the immune system, influence brain, liver, kidney, and skin functions, and positively affect circulating blood lipids, as well as produce and modulate hormones.

“We are not doctors, and we never suggest that anyone do anything without consulting their physicians, but we do have some customers who have told us they have been able to go off their med after using apple cider vinegar, and that makes us happy,” Cass said.

While many of the health claims are anecdotal, Phillips cites one study conducted by Carol Johnston of Arizona State University that demonstrated the benefits of apple cider vinegar for the subjects who were at risk for type 2 diabetes. “Over a period of fourteen weeks, the subjects consumed 8oz of a Bragg drink (containing 1 tablespoon of vinegar), twice a day with meals. The study found that adding vinegar to a meal had an antiglycemic effect in adults at risk for type 2 diabetes. The antiglycemic effect of the vinegar is due to the acetic acid contained in the vinegar which blocks the activity of certain carbohydrate enzymes.

“Let’s pretend you’re at risk for type 2 diabetes, and you want to eat a croissant. If you consume 8oz of diluted vinegar a few minutes before eating the croissant, the acetic acid in the vinegar will block the carbohydrate enzymes that would normally break down the croissant into the simple sugar, glucose; the undigested carbohydrates will travel through the intestinal tract and behave as a prebiotic would. Acetic acid also stimulates the activation of the enzyme AMP-Activated Protein Kinase, responsible for overall cellular energy homeostasis.”

While people have touted, even if not fully understood, the benefits of apple cider vinegar, with human nature being what it is, not everyone is prepared to follow the regimen of mixing their own tonic dutifully. In addition to six premade flavored ACV drinks, the company offers a wide variety of products – all organic and based on Bragg’s apple cider vinegar – which make it easy to add it into their diets.

There is the Tuscan Kale Vinaigrette which incorporates the vinegar with extra virgin olive oil from groves around Sparta in Greece and from Crete. Phillips has the oil tested regularly to ensure that it has not been adulterated. Kale’s nutrients have been recognized as good for bones and eye health. “It’s delicious as a salad dressing and can also be used as a marinade with a peppery kick,” Cass said.

Then there is the Bragg Miracle Cleanse, a mixture of apple cider vinegar, honey, lemon juice, and cayenne pepper. Phillips stresses that users must listen to their bodies. “You might consume a couple of tablespoons of the Miracle Cleanse in eight ounces of distilled water, and it might sit well, but for someone else, it might not, so we recommend that people listen to their bodies when consuming vinegar products; the body has to get used to the acetic acid and how much it wants to tolerate at any given time.”

Two years ago, Bragg introduced Soy-Free Coconut Aminos as a seasoning. It incorporates coconut nectar, apple cider vinegar, and sea salt as an alternative seasoning to a product the company has been producing since the 1930s, based on non-GMO (non-genetically modified organism) soy. It contains 140 milligrams of sodium per serving and so is ideal for people on a salt-limited diet.

Bragg’s newest product, Bragg Boost, was developed after a suggestion from Patricia. “She was visiting stores and noticing all the popular energy drinks, but they contained caffeine and are harsh on the body.”

Bragg Boost has a combination of twenty vitamins – including B12 – minerals, and herbs, and is made up of apple cider vinegar, organic honey, and coconut water. “It’s an ideal drink in the afternoon when you’re starting to drag or when studying for exams, but,” she cautioned, “we recommend drinking no more than one bottle a day.”

Another new direction for the company is the use of apple cider vinegar for pets. “People consider pets as close companions, so it’s natural if you’re doing something for yourself, you want to share it with your pets. It helps them both internally and externally and makes their internal makeup more acidic which fleas, ticks, and mites don’t like. It can also be applied diluted to hotspots on dogs, on hooves, and used for wound care and as a mane and tail rinse.”

Since 2008 Bragg has also been marketing plant-based enzymes that it asserts help support normal inflammatory response and a healthy cardiovascular system.

Patricia does not have any biological children to succeed her, but said Cass, “I like to think we’re all her children as she mothers us. Everyone who works here is here because they want to be, and they believe in the future, and that’s what makes it so enjoyable to come to work and use the products. I had worked in marketing and graphic design for other companies but never a health food company, and I feel it’s a blessing as I incorporate the products into my life and share them with friends and family. It’s very rewarding, and that is really part of my payment for working here.”

Added Phillips, “As Bragg employees, we are part of the Bragg legacy. Patricia’s legacy includes generations of families who continue to purchase Bragg products because Bragg does more than just put food products on shelves; we create food products that are really good for people and their families by using only the highest quality organic and non-GMO ingredients. We have a responsibility to deliver good food products to our customers and we take that very seriously; I see Bragg getting stronger as people are living longer and are becoming more aware of the connection between what they put in their body and how it makes them feel.”