Third-Party Logistics with a Difference 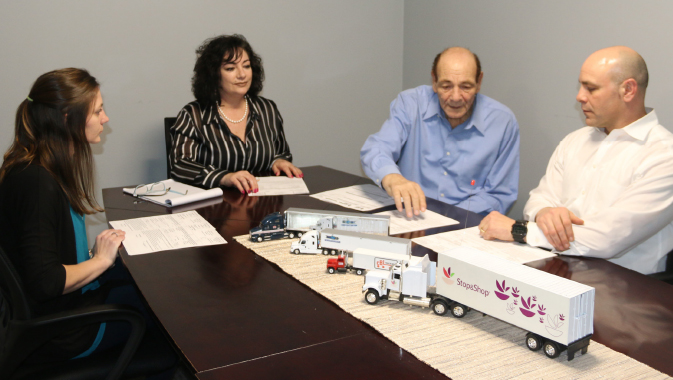 Trans-Link Nationwide Trucking and Logistics is a woman-owned third-party logistics company operating out of Cranston, Rhode Island covering all forty-eight contiguous states. “We’re very different from a typical 3PL,” says company President Carla Manni. “We operate almost as though we’re an asset-based company. We have several carriers and drivers that work exclusively with us.”
~
To be sure, the trucking business has deep roots in the Manni family. Long before Trans-Link, Carla Manni’s grandparents owned rival trucking companies in Boston. F. Procaccini & Sons and Badolato Trucking were competitors for many years before coming together with a plan to split up their territories. This enabled them each to operate without having to compete for the same customers, and therefore, without driving prices down, resulting in great success for both companies.

Their story inspired future generations of the family to follow in their footsteps by joining the transport industry. Later, Manni’s father would operate a trucking company and a warehouse, so she has been closely connected to the trucking business in one way or another for all of her life.

Today, Manni is at the helm of a modern company, but she hasn’t abandoned the conventional wisdom she acquired early on working in her dad’s warehouse. “Everything today is technology, it’s all email,” says Manni. “I’m still of that old school where I like to meet everybody. We get together, we eat together, then we do business together. That’s how I was brought up in this business and that’s how we build our relationships.” Trans-Link is in fact built on the idea that a commitment to building good working relationships with drivers, carriers, and customers is the key to running a successful third-party logistics operation.

This approach begins with the company’s relationships with its drivers and its carriers. Trans-Link has a team of seven full-time employees, but when the drivers that work with them come in every week to pick up their paychecks, they’re welcomed as part of the Trans-Link family. By forming strong relationships with the people they most depend on and showing appreciation for the challenging work they do, the company’s leadership and staff have created partnerships that last, with drivers who are loyal and committed to doing their best for the company. That loyalty translates directly into Trans-Link’s ability to build confidence in its customer base and a reputation for consistent and reliable service.

Trans-Link operates out of Cranston, Rhode Island, but it moves freight throughout the United States. While roughly thirty percent of the company’s business is moving commodities, the remaining majority is in transporting grocery products. Trans-Link has a number of major accounts with large companies such as Stop and Shop, and Giant Foods out of Pennsylvania, as well as Treehouse Foods and Bay Valley Foods out of Wisconsin and Daniele foods out of Rhode Island. These are just a few of Trans-Link’s larger customers for whom it moves freight throughout the country.

Often, after a relationship has been established and a customer realizes the quality of the service Trans-Link offers, these customers will hire the company for inbound transport of their raw materials as well. This frequently results in the company taking on jobs from the raw material producers as well. “When we get an account we just have a way of capturing the whole thing, all aspects of it,” says Manni. The logistics industry can be a very competitive marketplace, particularly for 3PL companies, but Trans-Link’s relationship-first approach has enabled it to retain long-term partnerships with customers, some of whom have been with the company for twenty or more years.

Customer satisfaction is the company’s primary focus, and with a staff of seven people, it’s important that everyone is focused on the same goal. For Trans-Link, that is keeping the customers happy and keeping the drivers happy so that they are equally invested in and committed to the same goal. As president, Manni oversees everyone, but her leadership style is less about micromanagement and more about trusting each member of the team in their individual roles. Her father Sam is responsible for keeping track of all the drivers and her brother Kyle operates a number of major accounts as well as handling all of the LTL consolidation programs and continuing to work on national accounts. Every member of the team has a unique and specific job, but they all work very closely together toward the same end, which is providing the best possible service for customers.

Trans-Link has also developed long-standing partnerships with the carriers it uses; in fact, the company still works with the same carriers it has since the very beginning, almost two decades later. While many third-party logistics companies use load-boards to post loads for public bid so that they can find the carriers willing to take the job at the lowest cost, Trans-Link prioritizes trust and proven reliability over price. The team does occasionally add new carriers to their roster, but are loyal to the ones that have earned their confidence. Those carriers understand the company’s expectations, they’re accustomed to the regular shipping lanes it uses, and they are familiar with Trans-Link’s customers and their needs.

In that way, Trans-Link is unique among 3PL companies who typically seek out the lowest possible cost for every shipment. Trans-Link’s approach focuses on satisfying the customer to secure the relationship, and pays for itself in the volume of shipments the team will do over time for that account. “I’m a people person; I like to be in front of people,” says Manni. “If I see ten people, nine of them will end up doing business with me at some point – because I understand the business. What we offer is like consulting; because we’ve been doing this so long, we have a lot of experience to share. As soon as we’ve built trust with a customer we can give them guidance.”

Indeed, Trans-Link is small enough that it can be flexible with every customer and provide a service tailored specifically to their unique needs, but it’s also large enough that it can manage accounts with major companies, cover all 48 contiguous states, and handle inbound and outbound shipping for companies, whether that means via LTL (less-than truckload), full truckload, rail, air, or sea. Trans-Link can handle any job big or small.

Truckload shipping is one of Trans-Link’s key specialties, and the company has formed partnerships with carriers in every state – typically, one major carrier with a fleet, and two or three smaller carriers with just a few trucks. This enables the company to be able to quickly call on partners anywhere in the United States, making for a seamless operation. To make this process even more efficient, Trans-Link focuses on providing its customers and carriers with as much information as possible upfront to avoid complications down the line.

“It’s like a project,” says Manni. “We try to make everything they want or need simplified and seamless. The person in that logistics department should have everything at their fingertips. We don’t want them to have to call us, or email us and wait; we try to do everything for them ahead of time so no matter who calls with what question, the answer is right there.” When problems do arise, Trans-Link staff make themselves available. “Believe it or not, we have real people answering the phones 24/7,” she shares.

By differentiating itself in these ways, Trans-Link has found itself capable of competing with major multinational companies who are able to offer their services at rock-bottom rates. Trans-Link remains competitive not on price alone, but on the impressive quality of its service. Customers see the value the Trans-Link team brings to the table in terms of commitment, communication, follow-up, and how carefully it chooses what carriers and drivers it’s willing to work with.

Trans-Link believes that the lowest rate isn’t always the best option. When a customer is shipping a high-value product, they want to work with a logistics company that they know they can trust, who in turn work with carriers and drivers they’re confident in, who have proven their reliability. These are the qualities that represent Trans-Link’s value proposition – a commitment to building a relationship that will last.

In two decades, Trans-Link has built a very successful third party logistics operation on the principles that are too often abandoned by modern businesses. “Everything we move, we treat like it’s our own freight,” says Manni. “We take everything personally. I have a feeling that for a lot of people who do what we do, it’s about making the most money from a customer today because you don’t know if you’re going to have them tomorrow. Our goal is to make a little less money, do a great job, and have the customer long-term,” she says.

“Every shipment is important to us,” Manni concludes. “We have a drive to satisfy the customer and that means a lot to me and to the people who work for me.”