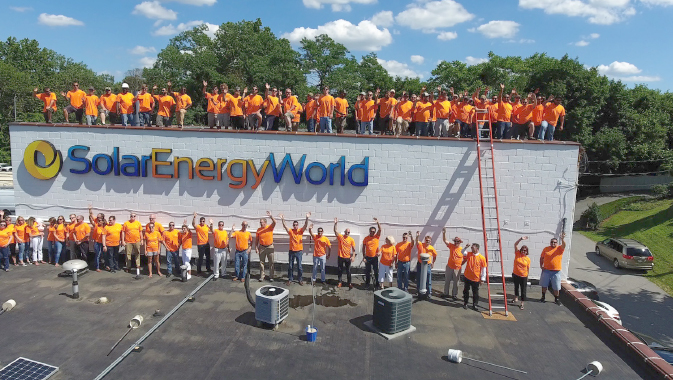 Solar Energy World Founder and Chief Executive Officer Geoff Mirkin is a man on a mission. He wants to show consumers how they can not only save money but earn money, all while benefiting the environment.
~
“There are not a lot of jobs out there where you can say ‘I get paid to save people money,’” says Geoff Mirkin. “There are people out there who help people make money, but there’s an inherent risk in that. With us, there is no risk. People feel they have no choice but to pay the utility company because they need electricity, but we show them they have a choice, and they can save money through solar energy. Since people have to pay for electricity, anyway, why not take advantage of all the savings solar can provide?”

“I feel if we don’t sell or lease to someone, we’re doing them a disservice because we’re allowing them to pay more than what they should pay. Not getting solar energy is really fiscally irresponsible to their wallets, to their families, and to the environment.”

This is by no means a pie in the sky scenario as Mirkin has solid figures to back up his claims, showing how residential as well as commercial building owners can, over twenty years, realize a significant return on investment. He also helps customers gain access to federal and state tax credits and offers options, including a power purchase agreement.

There is also complete ownership, realized through a payment of seventy percent of the total cost, supplemented by a loan to cover the remaining thirty percent which will be recovered through a federal tax credit, should the homeowner qualify. Moreover, there are immediate electricity savings, plus an increase in resale value of the home.

Mirkin brings a proven track record of building successful organizations to Solar Energy World, having begun his career in 1990 with Homefix Corporation. Through his efforts, the company expanded its Maryland operation to cover six states. Then, in 2000, he purchased one of the Homefix branches with another partner and grew sales by more than eighty percent in three years. By 2009, he wanted to get into a different industry, so his partner bought him out.

At the time, Mirkin was looking into buying solar for his own home and says he was amazed that even though companies were selling photovoltaic panels, they were not willing to go to a potential lead and provide customer service or customization.

“After seeing how difficult it was to get someone to come out and give me an analysis,” he says, “I decided Maryland needed a local solar panel installation company staffed by people who truly care about both educating the customer and providing great customer service. That’s what we created here at Solar Energy World.”

From its headquarters in Elkridge, Maryland, the company now serves over six thousand customers in Maryland, New Jersey, Pennsylvania, and Washington, D.C., and it plans to expand into Virginia later this year. Eighty-five percent of its business is residential, and the remaining fifteen percent is commercial.

All installations are live-monitored and guaranteed, but Mirkin says the panels last much longer than the twenty-five or thirty-year warranty since panels that were installed in the 1970s are still functioning. There are no moving parts to break down, and the only maintenance that is required is that the panels be washed and kept clean for optimum performance. Solar rays, he says, will penetrate the clouds, but not built up dirt and grime.

The company has received a number of awards, including being named by Solar Power World as one of the top five hundred solar contractors across the US for several years in a row, as well as number one in Maryland. It has been ranked among the top ten best companies by Best Company; received the 2017 Angie’s List superior service award; has A+ rating from the Better Business Bureau, and, upon the opening of its new showroom, received a congratulatory letter in 2017 from John P. Sarbanes, who has represented the Third District of Maryland since 2007 in the House of Representatives.

Even more telling than all the awards are the recommendations from satisfied customers. Mirkin is so confident about the work the company does that he invites potential clients to choose a home or business owner in their neighborhood to speak to directly about their experience.

Because it practices what it preaches, the company has a solar power system at the Elkridge headquarters facility that was designed and installed by employees and produces 52,500 kilowatt hours of clean electricity, the equivalent, according to the company, of “greenhouse gas emissions avoided by recycling twelve tons of waste instead of sending it to the landfill.” And since April 2010, the company has also been partnering with local schools for Earth Day events.

Annual electricity demand in the U.S. increases every year. Coal and petroleum products account for a large percentage of the energy generated and are the two largest contributors of pollutants found in water, land, and air.

As Mirkin explains, the company’s mission is to show property owners they do not have to rely on dirty fossil fuels alone for their electricity. Solar energy provides a clean, renewable, and sustainable alternative energy source that helps reduce dependence on fossil fuels, greenhouse gas emission, and grid constraints. Fossil fuels, he maintains, pump tons of poison into our air daily, and they are finite, while the sun, the most powerful, reliable energy source we have, will continue to provide energy for billions of years.

In the process of setting up the company, Mirkin became a ‘cool dad.’ “I liked my old business, but I didn’t love it. It was a way of generating income, but I didn’t have a lot of passion for it. I didn’t brag that I was in the window, roofing, and siding business, and no one ever said what I was doing was pretty cool,” he shares.

“But when we started Solar Energy World in 2009, my children, then aged seven and ten, got excited. The school curriculum was talking about renewable energy, and they were ecstatic that I was doing something for the environment. When I went into the solar energy business, I saw it as a great business opportunity, what I didn’t plan on was the good feeling, the effect I would get for helping to clean the air, create a better environment, and create jobs. We’ve built the company to 135 employees. We have a family atmosphere, and it’s something we all feel good about.”

Mirkin says he is constantly trying to create a better environment for his clients and believes that happy employees equal satisfied clients. Because of that, this past December he brought in Steve Dorfman, as Chief Experience Officer. Dorfman’s job it is to look at things that can be done in the workplace to create a better environment for employees and to also help the staff look at ways of improving the experience of their customers.

Even though residential and commercial owners recognize that clean energy benefits an already fragile natural environment, the decision to adopt it is dictated more by pragmatism than altruism, something Mirkin recognized from the beginning.

People are not going to invest money in something that will benefit the environment unless they can see a return on their investment, which happily, in this case, they can. Solar Energy World provides a customized design and installation service, and Mirkin brings his considerable business acumen to the table, helping each customer find the most advantageous way to finance the product installation.

“When we first got into the business, there weren’t a ton of options for homeowners,” Mirkin says. “There were some, but if someone didn’t have access to capital where they could borrow the money or if they didn’t pay enough in federal taxes to qualify for the thirty percent tax credit, it was difficult. It’s got to make economic sense, so for the past nine years, one of my roles has been to find finance partners, so if someone doesn’t qualify for option one or two, we have other options they can take advantage of to give themselves savings.”

It is not possible to provide an exact price without assessing a client’s particular circumstances, because every situation is different, says Mirkin. “We need to take a look at the roof, which direction it is facing, the amount of electricity currently being used, the type of photovoltaic products the owner is interested in, as prices can vary, but after all of this is determined, the potential client is presented with a detailed cost-benefit analysis.”

One option to acquire solar energy is through a power purchase agreement – the legal contract between the buyer and the generator of the electricity – that allows building owners to pay nothing for a system and installation to lock into a lower rate than what the utility company offers. Homeowners typically pay twenty to thirty percent less for electricity costs once their system is installed. According to Mirkin, some clients call this a “no-brainer” because homeowners pay nothing to start saving on their utility bills.

However, through ownership, with a high rate of return on investment, building owners can do more than save money; they can earn it. The cost of the equipment has gone down in recent years. On top of that, there are so many tax breaks, including a thirty percent federal tax credit for those who qualify, electricity buy-back programs, and state incentives, that the purchase price can be reduced by thirty to fifty percent.

With all of the purchase options, the monthly loan payment, combined with the post-solar utility bill, can be lower than what the homeowner paid prior to going solar. Also, when people own their solar energy system, they can earn revenue from the electricity their system produces through net metering and incentives like solar renewable energy credits (SRECs). Net metering is a billing mechanism that credits solar energy customers for the electricity they add to the grid when they generate more than they need to use. This also benefits the utility company as it, in turn, can earn clean energy credits.

The result for building owners is an exceptionally good return rate on their initial investment while making a contribution toward a better tomorrow by using clean energy. What’s not to love?