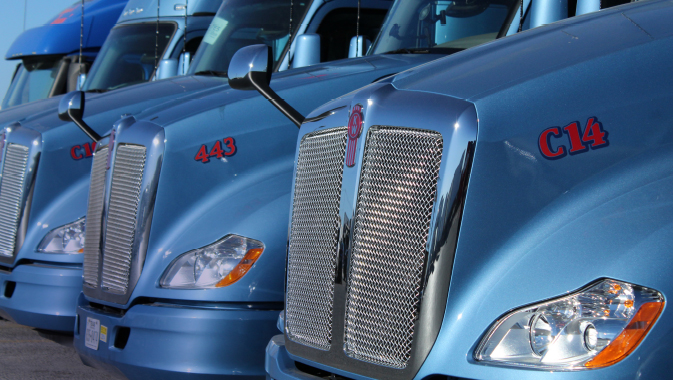 In our fast-paced, next-day-delivery world, we rarely stop to think of the colossal logistical apparatus at work. Trucks carry the vast majority of this freight, hauling seventy-one percent of all U.S. domestic tonnage in 2016 according to the American Trucking Associations (ATA). In the border city of El Paso, Texas, Muñoz Trucking is working hard to ensure its trucks and drivers keep moving and keep our economy going.
~
Like many companies, what would become Muñoz Trucking, Inc. began with one person, Angel Muñoz. Working as a truck driver for over thirty years, he dreamed of one day owning his own company. After he passed away in 1980, his son, Juan Pablo Muñoz, founded the company in 1995 in his father’s memory, and his sister Dolores later joined him in the enterprise. To this day, Muñoz trucks are emblazoned with the label ‘Angel’s Dream.’

Today, Juan Pablo’s daughter, Soledad Smith, helps manage the company as Operations Manager. Having grown up with her father’s company, Soledad has witnessed its growth firsthand. She tells stories of filing documents and answering phones from an early age and has a unique perspective of the company’s expansion. Far from being solely composed of drivers, she says, the company employs all manner of support personnel. “Everybody brings something special,” she says proudly.

Even Muñoz was tested during the 2008 recession, a time during which many smaller trucking companies folded. It was struggling to keep drivers employed and trucks on the road. But Soledad remarks how, with the constant change present in the trucking business, it was not too different from business as usual.

“It’s a hard thing to stay positive sometimes in trucking because things go wrong at every moment,” she remarks, proceeding to describe a typical day. “There’s a truck on the road that broke down, somebody might call in a fender-bender, or they hit a curb… things like that.”

Soledad simply states that Muñoz endured the recession through sheer perseverance. “You get a little worried; you get scared; you think that maybe you’ll go out of business, and at the end of the day, you keep on trucking,” she says, using an expression many in the industry use un-ironically. 

Today, the company has grown from a small, family business with few trucks to fielding over 150 trucks and over three hundred trailers. Muñoz-operated trucks currently travel across the continental United States, south into Mexico and north into Canada.

The company also holds a proud safety record, with numerous awards to its credit. Its trucks include not merely the standard tractor-trailer but five refrigerated trucks, known as ‘reefers,’ specifically designed to transport goods requiring refrigeration or climate control. These reefer trailers haul far more than merely perishable goods; Soledad cited a recent load of paint resin bound for Chicago, which was, at the time of this writing, locked in the icy grip of a polar vortex. The paint resin needed to stay above 60° F (16° C) to keep from freezing, so into the reefer trailer it went.

Muñoz hauled a total 16,000 truckloads in 2018, with the number for 2019 projected to be even higher. Soledad attributes the company’s success to its customer service and reputation, built over long years serving the El Paso area. “We’re able… to provide our customers with that ‘small business’ feeling, but provide them with the ability to move all their freight.”

One of the company’s most recent and proudest achievements is the acquisition of El Paso-based Orion Transportation, a local logistics firm. With Orion offering third-party logistics, Muñoz now has the logistical infrastructure to plan and perform freight runs effectively across North America. Orion is now under Muñoz management to deliver additional freight service during high shipping times.

The company is increasingly sensitive to and fighting against its carbon footprint. Heavy-duty trucks contribute twenty-three percent of the United States’ transportation-related greenhouse gas emissions, according to the U.S. Environmental Protection Agency (EPA). To combat this, Muñoz is one of the 3,500 businesses enrolled in SmartWay, an EPA program designed to increase driving efficiency, lower fuel costs, and reduce environmental impact.

Using sensors installed in each truck, the company can not only measure fuel consumption from each truck, but it can also combine that data with a database covering Canada, the U.S., and Mexico. By comparing the company’s own data to continental standards, it can take active steps to improve its fuel efficiency, thereby cutting costs and also reducing environmental impact.

The company also uses Samsara, a global positioning system (GPS) that allows the company to monitor drivers’ fuel efficiency, driving speed, and many other vital statistics. It even employs cameras to monitor if a driver is tailgating, speeding, or engaged in otherwise unsafe driving. Thanks to Samsara’s truck-mounted systems, Muñoz and other companies in the program are able to prevent breakdowns by detecting problems early, prevent bad driving habits from taking root, and lower the company’s carbon footprint by maximizing driving efficiency.

Despite these cutting-edge technologies, driver retention remains the company’s largest concern. Trucking has one of the highest employee turnover rates of any industry, with an average turnover rate of eighty-four percent in 2017 according to the ATA. The trucking industry is further compounded by an industry-wide shortage of qualified drivers. With these challenges, Muñoz is doing its utmost to keep its drivers employed.

To this end, it is employing new positive reinforcements to entice its drivers. While most trucking companies treat their drivers as just a number, according to Soledad, Muñoz takes special effort to become familiar with every driver – no mean feat in an industry with such high turnover. It also specifically holds all orientation and training on-site with food, giving its drivers more of a sense of community.

Other measures are more concrete and practical, including raising the drivers’ pay per mile. This measure, Soledad comments, was essential to maintaining qualified drivers. “If the trucks aren’t moving, nobody’s making money,” she explains. Muñoz also gives safety bonuses and Department of Transportation (DOT) bonuses. When drivers receive a clean bill of inspection or a safe driving record over a certain period, they receive a paycheck bonus.

The company also is heavily invested in the most up-to-date equipment. Aside from the previously mentioned Samsara system, last year, it upgraded the majority of its truck fleet to 2018 Kenworth T680s. With state-of-the-art driver assistance, power management and fuel monitoring technologies, the new Kenworth trucks are truly vehicles for the twenty-first century and twenty-first-century business. Finally, the company makes sure to maintain a fully-staffed vehicle repair shop on site, reducing maintenance time and expenses by keeping all repairs in-house.

While these measures appear to be having a positive effect on its drivers, the issue of driver retention affects El Paso as a whole. Situated on the U.S.-Mexican border right across from the Mexican city of Ciudad Juarez, El Paso has been a major freight junction for decades. Consequently, competing trucking companies are always starting, trying to lure away the company’s drivers and customers with promises of better pay and cheaper rates.

Soledad, having grown up in the company, sees this as a part of life. “It’s just something that comes with the market here in El Paso,” she remarks candidly, elaborating that at the private school her children attend, she estimates half of the parents are involved in trucking in some way.

Amongst these competitors, Muñoz has survived and thrived. With its recent expansion and acquisition of Orion Transportation, the company is growing faster than ever and is on track to field three hundred trucks and five hundred trailers. There are new contracts and partnerships currently under development with U.S. and Mexican companies, and the company sees a bright future.

Soledad, as Vice President and a lifelong veteran to the bustle of trucking, believes consistency is key not to both day-to-day operations and company affairs. “It’s not something you can drop the ball on,” she says. “It’s maintaining customer relations; it’s maintaining driver relations… keep that consistency.” As long as Muñoz remains consistent, the company will see smooth driving into the future.