A Better Way to Get from A to B 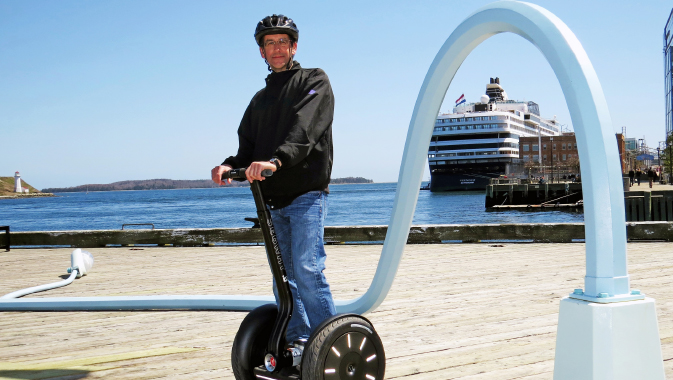 Imagine one tool to move people around factories, warehouses and communities – a tool that has zero emissions and saves time and money. You’ve probably already seen it; the Segway® Personal Transporter (PT).
~
Say you have a distribution center and a manager who is paid $100,000 a year. A big part of their time is spent walking from one end of the warehouse to the other, supervising employees and overseeing shop-floor logistics. Essentially, you could be paying them $50,000 just to walk around. It’s not only tiring and time-consuming, it’s hardly the best bang for your buck. There’s got to be a better way.

There is – the Segway PT. These two-wheeled, self-balancing wonders, invented by Dean Kamen and brought to market in 2001, are used globally for tourism, security and operations in airports, as well as community policing and more. They boast the high mobility of a traditional vehicle but the personal contact with citizens of a foot patrol.

“We haven’t even scratched the surface for this product,” says Chris Szydlowski, who owns Canada West Segway, one of four regional distributors in Canada. He’s worked closely with law enforcement and the Royal Canadian Mounted Police (RCMP) to incorporate Segway PTs and user training protocols into their services.

“Every day there are new applications, such as sidewalk inspections, greenhouses, paramedics. Anyone who is doing any walking, who has labour involved – we can save them money,” Szydlowski says.

A Segway PT for that $100K distribution center manager, for example, could triple his production. He can get where he needs to be faster and reduce fatigue, so he becomes more responsive in the job and has a more enjoyable experience while he’s at it.

Max Rastelli, Owner of Segway Nova Scotia, worked diligently to legalize Segway PTs in the province (the first in Canada to do so) as a new mode of transportation in 2016, opening up a wide range of business opportunities. He now has a company that’s been contracted by the City of Halifax to search for and remove graffiti.

“They thought about vehicles, walking and bicycles,” he says. Instead, “the City of Halifax said that they should look at a Segway PT to get around. There are so many untapped opportunities.”

The versatility and benefits of the Segway PT make for a compelling story, and business and manufacturing has become a huge push for Segway. The company is moving rapidly across the country to showcase the Segway PT (and its professional models; the i2 SE and the rugged-terrain x2 SE) as a valuable tool for a commercial workforce.

The company’s goal in all this is to shift public perception. When you first think about the Segway PT, you likely think about taking a fun tour on one of the devices – they’re incredibly popular for sightseeing and events on the Halifax waterfront in Nova Scotia, the historic Distillery District in Toronto and the riverfront paths in Edmonton and Calgary – but the untapped potential is in industrial settings like warehouses and factories.

“People think that it’s a toy, but this is the stigma that you have to get over, because it is a very practical tool,” says Jason Rizzuti, Managing Partner at Segway of Ontario and sister company Go Tours Canada. “Organizations will save a lot of time and money using the PT. These are some of the many advantages we communicate, along with case studies and practical demonstrations. And after people try it, they say, ‘Wow this really does help.’ It reduces fatigue, it increases efficiency, morale is higher. All of these benefits come out of it. You don’t really see it until you use it and then you want more.”

Case in point, a company in Edmonton, Alberta has one factory with two warehouses located close by. The owner had four quality assurance employees going from one warehouse to the other four times a day at 15 minutes per trip. The math on this scenario doesn’t equate to terrific productivity. These employees spend an hour each day walking between the warehouses; four hours a day becomes 20 hours a week and a significant 80 hours a month.

The owner called Canada West Segway for a solution, purchased a Segway PT and went through the commercial tailored training with Szydlowski and his team. The company then bought two more Segway PTs – and paid for them in three months, just from the labour savings.

That’s just one of numerous examples of client satisfaction and business improvements, Szydlowski says. “Labour costs are high for large warehouses and distribution centers. So, what do you do? You pile more work on your current employees? You hire more staff? Or you look at innovative solutions to reduce your operating costs.”

In fact, Segway sees itself as a key link in the supply chain, offering cost savings and higher productivity to distribution centers across the country. Now the company is building partnerships with value-added resellers in specific industries who understand the issues and challenges related to managing these facilities.

“The biggest challenge is just getting people on a Segway PT, because they can be skeptical,” Rastelli adds. “But if you can line up a meeting with decision-makers, we can commercially train the people and show [them] how efficient their business can be. I think there is so much potential there.”

Another drawing card is the Segway PTs environmental factor. They are truly green mobility options with zero emissions and little maintenance required. Segway PTs are powered by batteries that can be recharged simply by plugging into any standard electrical outlet, and the batteries themselves can last up to eight or nine years. The reliability is high and the machine itself is extremely durable, so the upfront cost delivers a significant return on investment. The actual operating costs are pennies per mile, which is minimal when you look at the savings in labour costs and the increased productivity.

“Much like cars, the sticker price can scare people,” Rastelli says. “But if you look at it as you would when you lease a car, and then look at the return on your investment, it becomes a much more interesting discussion. We also offer monthly or seasonal rentals. That is a way to get into the technology and the product.”

This year, Segway’s Canadian Distributors have upped their offerings by becoming “Level 3 Service Providers.” This affords them the green-light certification to deliver all levels of service regionally or locally for customers, minimizing the time and costs for services. There are only a handful of these service centers in North America.

Certainly, we are hearing more about autonomous cars on the horizon. At the same time, there are also many changes at the level of “micro-mobility” with a focus on the eco-friendly e-scooters, unicycles and hoverboards – which all have their roots in Segway’s self-balancing technology.

“I think what we are seeing now is that there is so much awareness about Segway’s technology,” Rastelli adds. “The product exists with so many possibilities.”