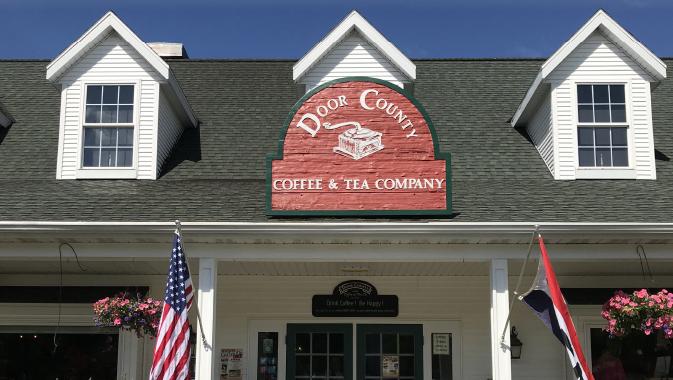 Door County is a peninsula in northeast Wisconsin separating Green Bay and Lake Michigan. It is known for its beautiful natural landscape and is home to five of Wisconsin’s state parks.

The Door County Economic Development Corporation (EDC) is funded through both public and private investment. While it is financially supported by the County of Door and local municipalities, more than half its funding comes from local businesses and civic-minded citizens. “The reason that both the public and private sectors invest in us is that they value the mission that we’re focused on, which is to ensure a vibrant county and a high quality of life for its citizens,” says Jim Schuessler, Executive Director of the Door County EDC.

To enhance growth of the Door County tax base, the EDC hones in on certain key issues, the first of which is workforce development. Like many parts of the United States today, Door County has more jobs available than people to fill them. The EDC’s strategy for tackling this problem comes in two parts. The first is to attract workers from outside into the area, and the second is to grow the workforce by working with the school districts to promote the county to students as well as prepare those students for the jobs of the future.

All the answers
In addition to attracting people from elsewhere, the EDC is working on a project called LIVE Door County. This involves the development of a website designed to answer the questions of people interested in moving to the area and eliminate as much relocation stress as possible. “If you’re looking to move here you’ll want to know what kind of jobs we have available, so LIVE Door County will have all the jobs that are posted brought together into one place. Where will your children go to school? Where can you live? What are the differences between the county’s communities? We’ll have all that information available,” explains Schuessler.

A similar project was developed in Sheboygan County, a few counties to the south, and it has been a huge success. Sheboygan posted the highest percentage gain in workforce numbers of any county in Wisconsin last year, and Door County is using the same concept to build its own success. Schuessler previously served as Business Development Manager at Sheboygan County’s EDC.

Door County is also exploring other marketing strategies, from billboards to social media. The LIVEDoorCounty.org project is expected to launch in September of this year.

The next generation
Attracting new people to Door County is key to developing a sustainable workforce, but preparing the next generation of workers is just as crucial. The EDC has launched a program called Inspire Door County which aims to establish better communication between companies and institutions of higher learning, as well as elementary and high schools, so as to connect students to work opportunities and to enable them to graduate with a realistic career path.

So, in the area of workforce development, the Door County EDC is focused on attracting new workers to the area right now, as well as developing a relationship with the workforce of tomorrow.

Entrepreneurial development is another key focus for the organization. It has programs in place to assist those who may want to start a business of their own, acquire an existing business, or simply sustain and grow the business they’re in. This can involve the development of a business plan or a funding strategy, or helping entrepreneurs find the perfect site to locate their business, among other things.

Relocation for the better
The EDC is also committed to helping business owners interested in relocating their operation to Door County from elsewhere. “That’s something that’s helped fuel our growth in the past,” says Schuessler. “People who already have a strong understanding of what they’re doing for a living, but they want to do it in a place that may offer a higher quality of living than where they’re at.”

Quality of life in Door County undoubtedly draws people to the region and a large part of that is the natural beauty of the landscape. Door County has five state parks, more than any other county in Wisconsin. It is located on the Niagara Escarpment, a 450 mile-long geological formation of 1,600 foot-high cliffs, pebbled beaches, streams, and waterfalls from Sturgeon Bay to the Niagara Falls area.

The escarpment offers stunning vistas that catch many visitors to Door County by surprise. Often when people think of peninsulas, they imagine the flat, sandy beaches of the Florida Panhandle. But it’s the diversity of Door County’s landscape that makes it so fascinating and alluring.

Sailing ahead
Historically, durable goods manufacturing has been a foundational industry for the county. Before and during the second world war, Peterson Shipbuilders, a shipbuilding company in Door County, built minesweepers for the United States Navy.

Another shipbuilding firm, now owned by Fincantieri, placed their focus toward ship maintenance during the winter months and has remained that way ever since. Fincantieri now operates a second shipyard in Marinette, Wisconsin, on the other side of Green Bay. Their Door County shipyard supplies superstructures for the Freedom Class Littoral Combat Ship built in Marinette.

And now, for the first time in nearly 40 years, the Door County Fincantieri Shipyard has announced plans to begin building ships again with a partner on Lake Erie. Fincantieri is already Door County’s largest employer, but this means many additional year-round job opportunities.

The Sturgeon Bay Industrial Park houses over fifty businesses that employ more than 1,500 people. Key players in the durable-goods sector include HATCO, an employee-owned manufacturer of food processing equipment, and Cadence, a contract manufacturing company specializing in medical instruments. Cadence is showing strong growth and recently built an impressive new facility in Sturgeon Bay. As these businesses grow, the Door County EDC is committed to satisfying labor needs through its workforce development programs.

Meeting challenges head-on
One of the challenges related to workforce development in Door County is insufficient housing. “In economic development, you have to be able to walk and chew gum at the same time; you can’t focus on just one thing at a time. It’s workforce today and it’s housing tomorrow. We’ve definitely always had a housing challenge here but we’re working on a strategy to address it,” Schuessler says.

In February of this year, the EDC received the findings of a housing study which uncovered a need for apartments and owner-occupied homes, and also for seasonal housing to meet the needs of seasonal businesses.

The county is now moving into the second phase of a plan to identify sites for new housing developments. In accordance with the acute shortages uncovered in the study, the EDC is focusing on Sturgeon Bay and some municipalities in northern Door County. Sturgeon Bay currently has 228 market-rate apartments in the pipeline, either under construction or breaking ground within the next 90 days. It has identified roughly twenty sites within Sturgeon Bay that are shovel-ready and has invited thirty developers to the area in June to discuss strategies for building.

Many of the smaller villages and townships north of Sturgeon bay also have a real need for attainable housing. Restaurant workers in northern Door County often have a thirty-minute commute to their job, and the strategy in these regions is to work with each municipality on smaller-housing developments. The goal is to have at least forty units underway by next spring and to hold another regional developers’ summit later this year.

Rich history of hospitality
The hospitality industry represents a multi-generational tradition in Door County. From the famous Al Johnson’s, a Swedish restaurant with real, live goats that spend their days on the restaurant’s grass roof, to a multitude of breweries, wineries, hotels, and resorts, Door County has multiple generations of families who return to visit year after year being served by multiple generations of business owners.

The food and beverage sector is also growing. Door County Brewing, in Bailey’s Harbor, has announced plans to expand. Bridge Up and Starboard are two new microbreweries located in Sturgeon Bay, and One Barrel Brewing is opening a new one-million dollar taproom in Egg Harbor. As new businesses open in northern Door County, what was traditionally a seasonal economy is shifting into a much more sustainable twelve-month economy.

All in all, Door County is one of those rare places that combines an environment that’s hungry for growth and a real quality of life. Schuessler says, “You come here and you have this traditional experience with this new epicurean experience laid on top of it, and I don’t think anybody can touch this place. If you have high expectations you’re not going to be disappointed.”