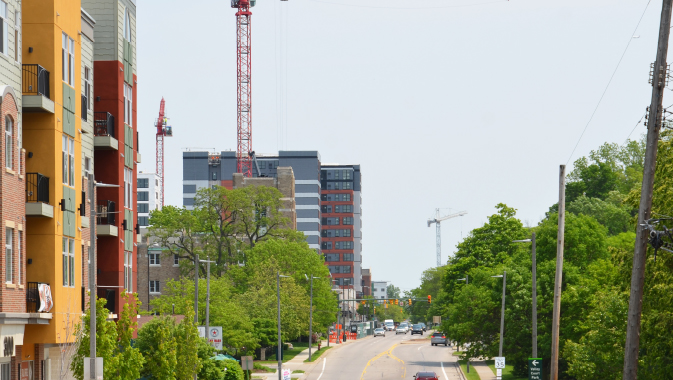 Known for its proximity to Michigan State University (MSU), the city of East Lansing is not your typical university community. MSU, located in East Lansing, is a particularly large school with more than 50,000 students, and it boasts the second-highest number of on-campus housing units in the country. Whereas most university cities provide the majority of student housing in the surrounding local area, the 16,500 campus housing units are an unusual and beneficial element of the community.

East Lansing’s downtown area is along the edge of the university and one mile from the Frandor Shopping Center, opened in 1954, one of the first malls developed in the United States. In the 1980s, malls and shopping centers started to take away from the traditional retail businesses downtown, but attraction to the area is now being restored. There is a variety of retail types downtown and several longstanding restaurants that are deeply rooted in the city’s culture. MSU alumni often return to visit the local bars and restaurants, such as Beggar’s Banquet and Crunchy’s, famous for its karaoke nights, that they came to love as students.

Besides being the home to Michigan State University, East Lansing’s location immediately adjacent to the state capital, Lansing, provides the city with a stable economy and reliable employment opportunities since state government operations usually continue to function even during a recession.

However, since the Great Recession, the shifting dynamics of East Lansing have created a demand and opportunity to increase the density of the downtown. One mixed-use development project currently underway consists of a Target small-format store with groceries on the first floor and a 273-apartment residential building on the eleven stories above. The Target store and the recently opened Campbell’s Market Basket are especially exciting developments for the downtown since it has gone many years without a convenient source of fresh produce, meat, and baked goods.

Behind this development on Albert Avenue is a new parking garage with ninety-two senior living apartments above it to help diversify the mix of age groups living in the downtown area. There is also another twelve-story building under development downtown for mixed retail and residential purposes.

“We have a requirement in our downtown that at least twenty-five percent of any new residential building be either low to moderate income, senior, or owner-occupied,” explains East Lansing Mayor Mark Meadows.

For decades, the city has attempted to establish Albert Avenue as a second thriving, walkable downtown business street along with Grand River Avenue, and it is beginning to see progression in that direction. The addition of more residents living downtown has driven the retail demands and brought back the vitality of the area.

“There’s a lot of new people that will be living in the downtown, and that will ultimately serve as a trigger to change the retail demands in the downtown, shifting back to what we saw in the mid-eighties, before we saw this decline as a result of not just the Frandor Shopping Center, but a couple of other shopping centers opening and the movement of business to those shopping centers,” says Mayor Meadows.

In 2005, East Lansing partnered with Lansing, Ingham County, and MSU to create one of five SmartZones in the state of Michigan. The Lansing Regional SmartZone (LRSZ) is a local development finance authority for technology-based businesses in the region. The organization turned the upper floors into a technology incubator and Jackson National Life converted a former department store downtown into its own innovation “Zone” to attract university talent.

The incubator allows entrepreneurs and professors to develop their ideas off campus in a supportive, useful environment, and the space is always full. The LRSZ is looking for more incubator space opportunities inside and outside of downtown to keep up with business growth.

For many years, East Lansing has needed new hotel space downtown as The Marriott is consistently full. After the recession, developers recognized the rare opportunity for hotel construction because the city’s hotel accommodation regularly fills. When there are events in Lansing or at MSU, people often prefer to stay in East Lansing because of its engaging downtown community. The Graduate Hotel, a 194-key hotel, is now under development in the downtown core and plans to open late summer of 2020. “We are and have been for some time, the premier place in the region to live and to recreate,” says the Mayor.

With the support of the Lansing Economic Area Partnership (LEAP), East Lansing strives to retain MSU graduates, attract new businesses to the area, and encourage existing downtown businesses to expand. “We work closely with LEAP on specific projects as well as on regional programs to help our region thrive,” says Tom Fehrenbach, the Community & Economic Development Administrator for the City. “We target marketable properties within the community, several of which are City-owned.”

“We do acquire properties with the purpose of having something we can offer and to encourage the type of development we are looking for,” says Mayor Meadows. “We want more office workers, so we’re willing to go the extra mile in order to attract more office development and office users to town.” By specifically providing incentives to businesses that choose to locate in the downtown area, East Lansing hopes to increase its stability and further develop the SmartZone as it moves forward.

The impact of MSU on East Lansing is significant, although it does come with its challenges. The city and the university, while closely intertwined, do have separate powers and police forces, but the city does provide fire and emergency medical services to the university’s campus, which is extensive for 16,500 on-campus residents. However, MSU is a primary collaborator on various projects and developments. The partnership is beneficial for general business development activities for the city as well as specific projects such as the establishment of hazardous material teams.

East Lansing has a surprisingly diverse population for a Midwest community of approximately 50,000 people. More than 130 nationalities are represented in the city, and although this is primarily as a result of the university, the racial and ethnic diversity can be found in all the K-12 schools and neighborhoods, not just on campus.

This is a good place to live and work, and the square footage costs of homes within the city and in the entire capital region are among the lowest in the country for their quality. Sometimes there are complaints about the higher-than-average taxes, yet those who are aware of how the city taxes are spent appreciate the resulting quality of life. The local schools are rated among the best in the state and the country due to investment from these taxes.

“We are the third-most educated community in the nation, and Michigan is lucky enough to have two of those communities. Ann Arbor is the other one, and we’re both trying to beat out Chapel Hill, which is number one,” says Mayor Meadows.

The East Lansing community actively participates in a program with the university called ‘One Book, One Community,’ where a well-known author will come to speak about one of their books. The event has become very popular, and there are a surprising number of people in East Lansing who get involved, but who have no connection to the university. Last year, when Justice Sonia Sotomayor was the chosen author to share her memoir ‘My Beloved World,’ it seemed as though the entire community was reading the same book at the same time.

Another unique aspect of East Lansing is that it’s elected to keep its own local library in addition to the district library system, which is not as common these days. The East Lansing Public Library is considered the best library in the region and offers programs for citizens of all ages.

The city government in East Lansing recognizes that its primary objective is to deliver services to the people in the community. It provides essential services such as public safety, water, and sewer, and it also provides services that enhance the lives of its residents.

“Our streets are clean, well maintained, and people do pay a little more for it, but we hear constantly, ‘I wouldn’t have moved here unless I wanted these services, and I’m willing to pay for them,’” says Mayor Meadows. “It’s just a great place to live. I’ve been here for a long time, and I can’t imagine living anywhere else.”