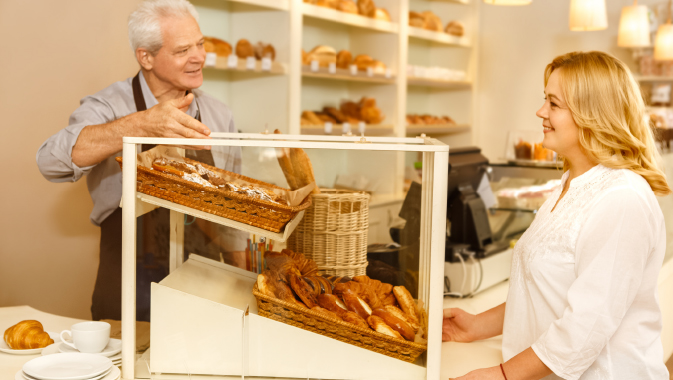 We’ve heard about robotics and Artificial Intelligence taking over the workplace, but what about one of the fastest growing segment of all – senior workers?

Many of us picture retired life as a utopia, the ultimate reward for a life of hard work. But for others, the reality of no longer working, of sleeping in and having almost nothing to do is numbingly boring. Sure, there are grandkids to babysit, sports to take up, and loose doorknobs to tighten, but really, is golf or fiddling around with hammer and screwdriver enough for those whose lives were defined by their careers? Fortunately today, although growing old is inevitable, saying goodbye forever to the workforce is optional.

While retirement age varies worldwide – 66 years and six months for Americans turning 62 this year, for example – the age of retirement is increasing worldwide, and is about to go from 65 years to 67 in France, Germany, and Spain, and 68 years in Britain and Ireland. And while anyone of financial means can retire long before reaching their mid-60s, for others there are penalties for calling it quits, including a reduced old-age pension. But even then, why do so many of us still work far longer than the official retiring age, and apparently, longer than we need to?

One reason is our increased lifespan, and better health throughout it. A hundred years ago, the average American man lived to just 53.5, and average woman to 56 years. Two decades ago, it was 73.8 years for males, 79.5 years for females. Today, life expectancy in the United States is 79.38 years for men, 81.88 for women, far surpassing the age of retirement. And the number of Americans living well past 100 is also on the rise, increasing 44 per cent from 2000 to 2014, thanks to advances in medicine like antibiotics and cancer diagnostic techniques, improvements in hygiene, vaccinations, and nutrition.

The fastest-growing workforce
With declining birth rates and seniors living longer lives, we are at a crisis point never seen before in history. An aging population means a greater impact on health care costs, including doctors, nurses, and caregivers, along with a need for long-term facilities and at-home care. With many of us living longer than ever, the workplace is also seeing an increase in senior employees. Some work out of financial necessity, while others remain in or re-enter the workplace because they want to stay physically, mentally, and socially active.

According to the 38 million member-strong non-profit organization AARP (formerly known as the American Association of Retired Persons), the fastest-growing sector of the workforce in 2018 was men and women over age 55. Although comprising just a quarter of the American labour force, workers 55 and up accounted for the largest growth of any specific age segment, at 49 percent.

Along with being able to pick from a pool of older, educated workers, another factor behind companies hiring mature employees is their can-do attitude, which certainly stands in contrast to what we often hear about millennials from their critics – of being lazy, unmotivated, and unreliable. Like so many stereotypes, there may be some truth to this, particularly with those 20-somethings taking on uninspiring entry-level jobs like those in the food service industry. So when some employers, like fast-food giant McDonald’s, take pride in hiring young workers for their first jobs – to clean floors, and staff counters and drive-thru windows – it’s probably despite the reputation of these young job-seekers, rather than because of it.

McDonald’s says on its website that “a first job at McDonald’s has served as a springboard to exciting and diverse careers for many successful Canadians. It’s a great start,” and it is indeed, but what’s great is that McDonald’s has taken it upon itself to expose the young to the real world’s expectations of punctuality, responsibility, and teamwork. But then, of course, older workers long ago mastered this kind of required behaviour.

So, while McDonald’s and other fast-food chains still focus recruitment efforts on younger workers, other businesses – and sometimes even the same ones – are realizing the benefits of hiring mature employees. In fact, this other, older, less publicized group – men and women 55 and up – is returning to the job market with a roar. Meet the ‘perennials’, skilled, willing and able.

Earlier this year, McDonald’s and the AARP joined forces to recruit older workers to fill about 250,000 summer jobs across America. According to the AARP, which has several employment programs including their BACK TO WORK 50+, integrating younger employees with their older counterparts can be positive, and “can often bring unexpected benefits.”

Customer relations
With “maturity” and “professionalism” frequently given as reasons that companies are hiring workers of 50+, the AARP and McDonald’s are not alone in pursuing mature staffers. It is not uncommon for both white and blue collar sectors (often in such skilled trades as welding) to keep on skilled senior workers past the mandatory age of retirement. In its most simple terms, a labour shortage is bad for businesses that need employees, but great for anyone looking for a job, since there are so many positions available.

National restaurant chain Bob Evans and Dunkin’ Donuts are employing some unusual tactics to bring older workers back into the fold, including recruiting at churches and senior centers. Employers benefit both from workers who are punctual and possess years of work and life experience, and from frequently paying no more in wages than they would to a high school student or recent graduate. Ultra-competitive, cutthroat behaviour is absent since older employees, rarely trying to claw their way up the ladder, have nothing to prove.

To Bob Evans, which recently advertised with AARP, older workers are a nice fit within the family-style ethos of the restaurants. In many of the company’s 500 locations across 18 states, senior staff serve as ambassadors for the company, which believes in “treating strangers like friends and friends like family.” It all goes nicely with the stick-to-your-rib meals like country fried steak, classic meatloaf, and fork-tender pot roast.

Other businesses, like the Honey Baked Ham Company, posted vacancies aimed at recruiting senior workers for 12,000 seasonal positions over last year’s Thanksgiving and Christmas. An added incentive was a 50 percent discount on food.

Millennials vs. perennials
Although it is unfair to tar all millennials with the same brush, employers worldwide are complaining about easily distracted younger staff, about too much time spent on phones, about grudging interaction with customers. Widely reported in studies conducted by U.S.-based employment and business company LinkedIn, and others, millennials are job-hoppers, moving after just months, or even weeks, of being hired. Some see this is as self-assurance; others as a red flag, and question the underlying reasons for 20-somethings’ flightiness.

Gallup article, Millennials: The Job-Hopping Generation revealed that 21 per cent of men and women born between 1980 and 1996 changed jobs in the past year – three times the number of non-millennial respondents. Estimating that this turnover costs the American economy $30.5 billion every year, the survey confirmed the reluctance of millennials to settle down in one job, feeling that employers provided few “compelling reasons” to stay, and with just 29 per cent feeling “engaged at work.”

In Europe, the situation is no better. In late July, a controversial episode of the popular television program Good Morning Britain presented a debate between millennials and older workers, with one pundit commenting “It’s like they’ve [millennials] been wrapped in cotton wool, they think the world owes them a living,” adding that many fail to commit to employers, don’t understand hard work, self-sacrifice, or loyalty, and fail to act with maturity. “The slightest bit of trouble, the slightest bit of confrontation and first of all, shock, horror, and they either go one of two ways. They either go into a hissy fit and then a flounce or they go all snowflake-y. Grow up!”

As long as the present demand for workers continues, there is little doubt that 50-and-overs are here to stay, and businesses themselves are not the only ones searching for ‘mature staff.’

The City of San Francisco recently held a job fair, specifically connecting with seniors and disabled persons. Of the 30 prospective employers, some were in the food service and hospitality industries, while others were in security, sports management, shuttle services, and even the cannabis sector.

And with more than 350 men and women in the above two categories pre-registering in search of jobs before the job fair opened, it certainly seems to confirm that as the need for seasoned staff increases, a supply of willing candidates will also be there.