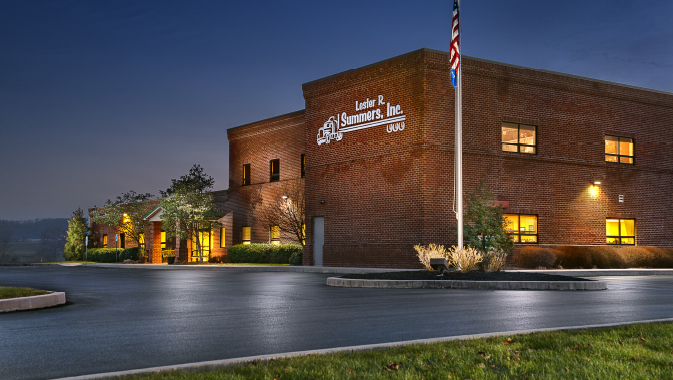 A few months ago, Lester R. Summers, Inc., a venerable, family-owned, heavy haul transport company based in Ephrata, Pennsylvania, met with each individual in its company to discuss the company’s response to COVID-19. The effects had hit Pennsylvania hard.

The occasion marked the second time in under a year that the firm gathered its entire staff to make a big announcement. A previous mass meeting was devoted to a decision to turn it into an employee-owned operation, a move with potentially huge benefits for workers.

While held for quite different purposes, both communications offer a glimpse into a company culture built around respect, loyalty, and concern for employee well-being.

Summers Trucking is the premier hauler of oversize precast concrete in the north-eastern part of the United States. From concrete products, steel and lumber to building façades, machines, modular buildings and specialty freight for NASA, the company – profiled in the June 2018 edition of Construction in Focus – specializes in moving massive cargo.

At the beginning of 2020, Summers Trucking was on a roll, coming off another year of solid growth. “Our first quarter was very strong. We had our best first quarter ever,” says Vice President of Customer Solutions John Summers. Then, COVID hit, and work stalled. “Our second quarter was our worst since 2009,” he says.

In mid-March, Governor of Pennsylvania Tom Wolf imposed strict lockdown regulations that shuttered many businesses. Around the same time, much of the construction transport business dried up. While some companies might have culled their workforces, Summers Trucking took the opposite approach.

“Within a week of the [Governor’s] announcement, we met with all of our employees. We told every employee: ‘If you are not comfortable coming to work, if you have to take care of your children [because schools are closed], we will support you if you go on unemployment. We will continue to pay your healthcare… and you can come back to your job,’” he recalls.

New health and safety measures were introduced. Staff had to wear masks while at work unless they were toiling alone. A truck-washing firm, responsible for cleaning the company’s vehicles, had to follow stricter hygienic protocols. In-house mechanics also had to adhere to new sanitary procedures when performing maintenance or repair duties.

Summers Trucking did not let anyone go due to COVID. Of the 101 employees it had before the downturn, only four left for good because the company could not offer the same amount of overtime it had prior to the slump.

And now, business is beginning to return to normal. “Our third quarter, July, August, started ramping back up. As of September, all our company drivers and up to fifteen to twenty outside drivers are on every day. We’re anticipating our fourth quarter to be strong, although we’re not burying our heads in the sand,” John says. “We are using this opportunity to expand our customer base, add to our services offered and refine internal processes.”

Lately, the company has been getting into “other oversized things, like wind turbines, cell phone towers, and light pole structures,” he continues. “I think our niche will continue to be oversized, over-dimensional loads. That sets up apart from others.”

With the upswing in business, the company has been able to revisit its expansion plans. “When we talked before, we were largely focused on Pennsylvania, New York, New Jersey and Virginia. We’re still in these areas heavily and are also getting more into Massachusetts, Ohio, and North Carolina. These are areas where we have seen growth. Going up and down the East Coast is becoming more viable for us,” John says.

Summers is eyeing locations for new branches, perhaps in Massachusetts and North Carolina. “I’m hoping if we talk again a year or two from now, we’ll be in both of those locations,” he says. “There are some very good precast companies in Massachusetts, North Carolina, et cetera, that we have not been able to be competitive with because we were trying to operate everything out of our main terminal in Lancaster County.”

As the company moves ahead, details about its new ownership model are also being sorted out. Last year, the company was abuzz with rumors that the family-run business, originally founded in 1946 by Lester R. and Dorothy R. Summers (grandparents of John), was about to be sold. To clear the air, a mandatory, all-employee breakfast meeting was scheduled for a Saturday morning in early July 2019 at a local restaurant. John’s sister, President Rebecca Summers, outlined the firm’s history and then turned to the future.

“She said, ‘There are a lot of rumors going around that we’re selling the company, and I wanted to let you know that we have sold the company.’ There was dead silence in the room. Then, she said ‘Look at the tables around you, and you will see the new owners of the company.’ There was still silence. Then she said: ‘We are becoming a one-hundred-percent employee-owned company,’” he recalls.

Rebecca explained to the assembled employees that the company had instituted an employee stock ownership plan (ESOP). Workers could receive shares in the company, essentially becoming part-owners. Surprised and delighted, the staff burst into applause, John says.

The decision to introduce an ESOP was based on several factors. The family wanted to pass ownership on in a way that would maintain the company’s culture and reputation. Giving shares to workers would create incentives for prospective new employees while rewarding existing staff. New staff and new leaders might also help the company grow. For now, Rebecca, John, and their cousin Ken, Vice President of Operations, remain the senior management team.

Summers Trucking has seventy-five company trucks and five hundred specialty trailers. It has recently acquired a pair of new trailers with steerable front and back axles that make it easier to take corners when hauling long loads.

The company owns all the vehicles in its fleet. “We get packages on leasing, but we’re not interested at all,” states John. Having ownership of its vehicles gives the company leverage when it deals with financial institutions, he explains. “It also allows us complete control of maintenance, which is very important to us.”

The company’s tractors are fitted with global positioning systems (GPS) and electronic onboard recorders (EOBR). The recorders maintain a digital log of hours worked and distances traveled, and the company has added outward-facing cameras to its tractors. The cameras record what is going on outside a truck and have proven “a wonderful help for us,” in the rare occasions when vehicles are involved in an accident.

Summers Trucking enjoys an enviable reputation for safety. In 2019, the company won first-place safety awards from the Pennsylvania Motor Truck Association (PMTA) in the dump truck and flatbed categories. Last year, two of its drivers, Noah Burkholder and Lynn Hart, won Driver of the Month awards from the PMTA as well. On the national level, the company won first place awards for Flatbed Heavy Haul, Dump, and Industrial Safety from the American Trucking Association (ATA).

The shortage of drivers entering the trucking industry is still one of the company’s biggest challenges. The COVID pandemic has put such concerns on the back burner for now. With the economy still in a fragile state, there is less demand for new drivers for the time being, but Summers Trucking is currently facing a workforce challenge on a different front.

The downturn in business at the start of the year means many trucking companies have become reluctant to buy lots of new vehicles. Instead, the focus is on maintaining existing fleets. However, as with drivers, there is a dearth of young people who want jobs as mechanics and technicians in the sector. “We have a more difficult time finding mechanics and technicians than we do finding drivers right now,” he says.

Some things have not changed since the last time we spoke. The company still has not felt the need to do a lot of advertising, since recommendations from satisfied clients remain one of its main forms of marketing. Having clean, well-maintained trucks also helps enhance its public image, as does its ability to handle giant loads.

“The sheer size and magnitude of things we’re hauling, when people see that going down the road, they take notice of who’s hauling it,” says John. And a new company logo is being created, “to emphasize one-hundred-percent employee ownership,” he adds.

As for the future, he would like the company to branch out into project management, a service he thinks it would excel at. “We have the knowledge of the industry – especially heavy-haul/oversize – like few people do,” he states. “My goal is to start offering project management services to our customers.”

“Offering that liaison, taking the next step beyond trucking, adding project managing liaison capabilities for our customers is something that I’m looking forward to in 2021. There are going to be so many people scrambling to get their companies back in place again. We will look for opportunities to help them out in areas that are not their sweet spots,” John adds.

He cannot see the firm moving away from heavy hauling. “That’s been our DNA, pretty much,” but he does forecast strong growth. “Five years from now, I anticipate three terminals instead of one, expanded geographic reach, and record sales.”